The Flash - The Fly Roadtrip part 3

Strip, strip, pause...yep that looks sexy.  The musky/pike fly my buddy handed me just before we left the Ozarks had some moves.  With the right twitch the streamer would dart from side to side.  The nose would swing back and nearly touch the toes.  That's enough practice, time to swim it for real.  Strip it back in real fast, BAM!  From the tanic colored water a dark flash of gold explodes right at the side of the kayak.  My heart almost stopped cold... 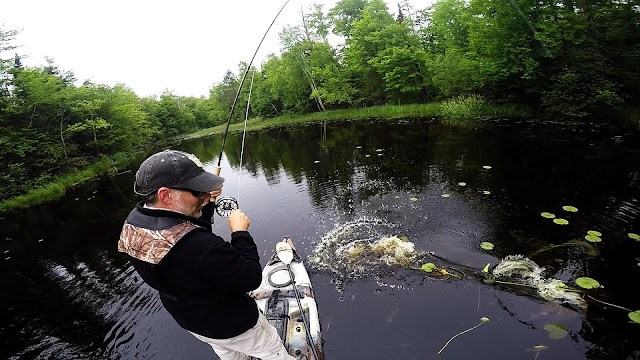 What had I gotten myself into?  A few hours before I was waking up to rain in the back of my truck.  I had driven 13 hours to the "Driftless" area in Northeast Iowa.  It was 2 am when I stopped at the Yellow River State Forest park and made a cot camp in the bed of my truck.  The rain started shortly after. 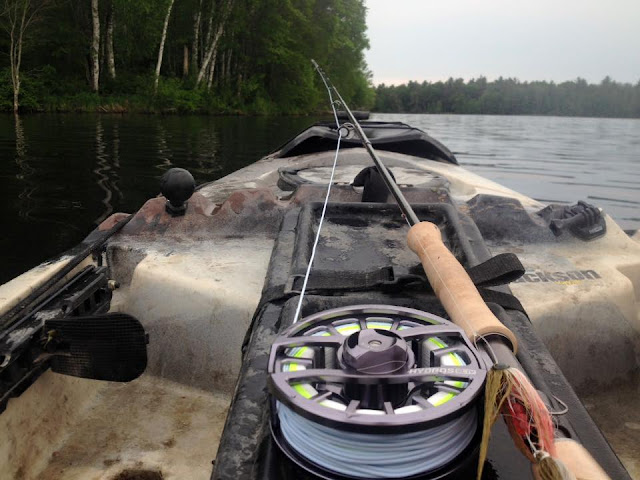 As long as there wasn't any lightening I was fishing.  Only problem was you can't see or get cell service in the ravines.  I could hear the faint rumble in the distance.  It seemed like a storm was moving in on me.  I kept fishing.  Then suddenly the distant rumble became a huge crackling and booming right on top of me.  The "Driftless" had hidden it from me until the last minute.  I'm out!  It wasn't my fastest mile but I feel like it was a respectable time. 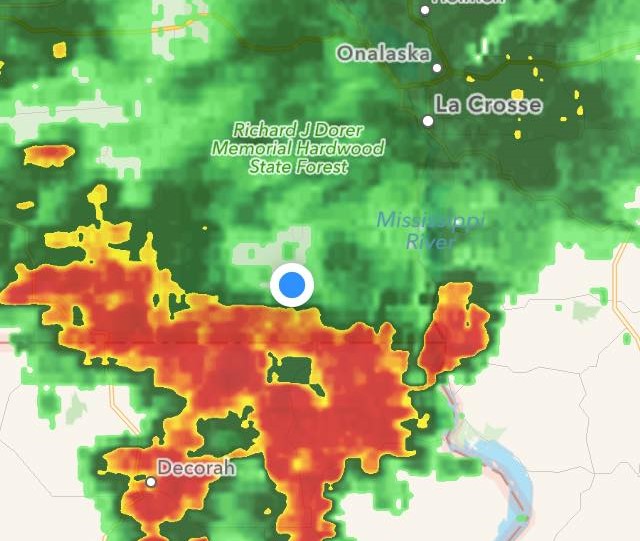 How does a fish that big move in that fast without being seen?  That was the thought I had as the 30 inch pike vanished beside the kayak.  My next thought was, remember to breath or you'll pass out and be eaten by one of those toothy critters. 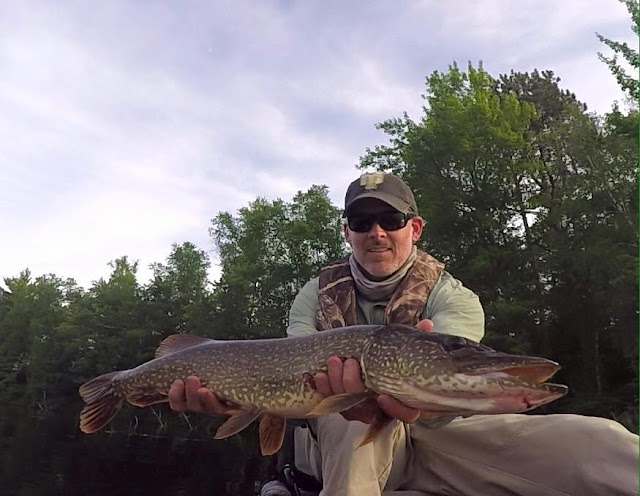 Hit the point.  Hit the island.  Hit the downed tree.  Strip, strip, pause, nothing.  Too fast, too slow, not enough movement?   Let it get some depth first.  I should have read more.  I have no idea what I'm doing.  Pick it up, put it down over a point with deep pocket on the back side.  Wait, 7 inches of feathers and fluff can barely be seen swimming across the top of the grass.  Yeah, that looks good.  Jerk the rod tip right, give it a 2 count and do it again.  Nose to toes, pause, the head pulsed.  A flash of gold interrupts the dance. 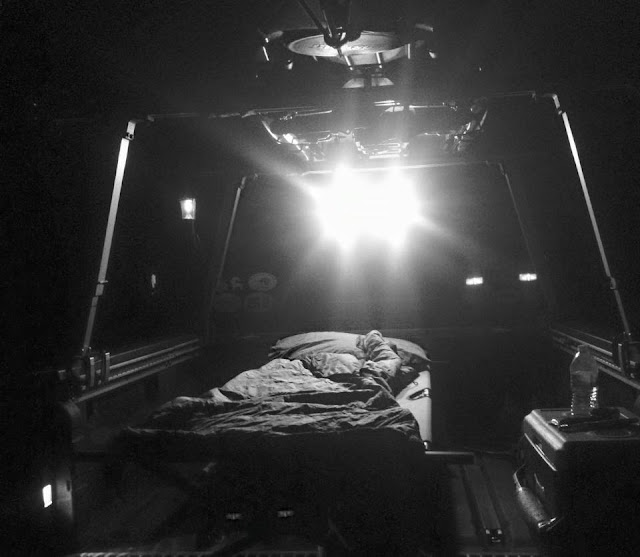 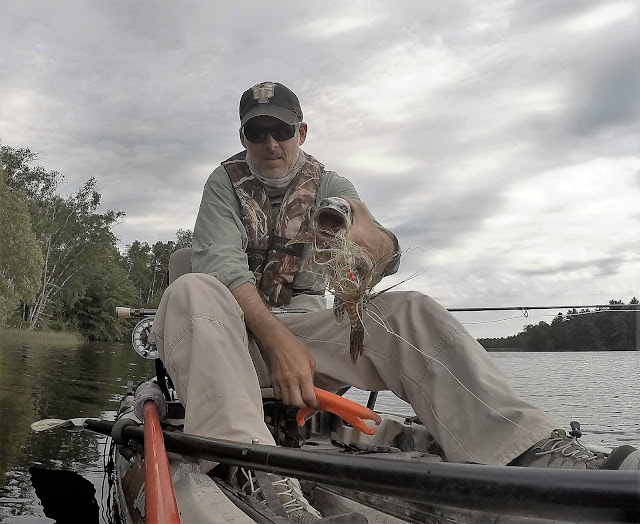 My body was moving slower than usual the next morning.  My mind was on overdrive.  My cell phone tried, unsuccessfully, to distract me.  At some point it was locked by my carrier.  It would take a day to get fixed, but I kept fishing.  I worked it out when I was forced off the water by the numerous lines of storms that would pass throughout the day.  It was both, frustrating and exciting, all at once. 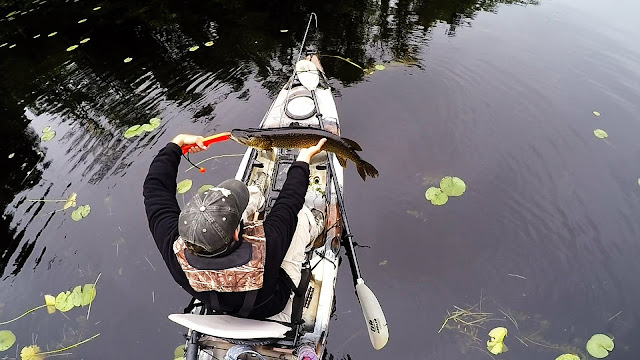 Even now I can't stop thinking about what I'd seen.  How pike suddenly appear from the shadows and attack with a vengeance.  It became hard to look away.  The flash is a rush.  It's addicting.  It's unlike any type of fishing I have done.  You don't see them but you know they're close.  Often appearing right beside the kayak as you pick up.  Then the flash that was unlike the others.  More copper with a hint of red.  It had been a musky and it was a short strike.  My time was over, time to start heading home.  I completely get why musky have such a masochistic following...one more cast, one more hour, one more anything for a chance at a musky! 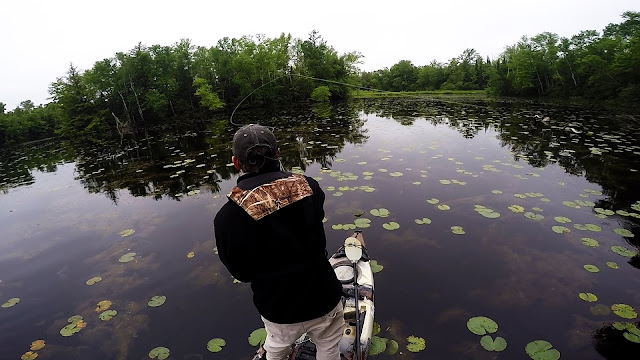 I had rolled the dice on this part of the trip.  At some point during the chaos I became willing to deal with just about anything.  For 3 days, I dodged storms, paddled out only to return an hour later, threw the Recon 10 wt until my arms burned, got lost on and off the water and sheltered in my truck.  Nothing I owned was dry anymore.  In every sense of the word it, sucked!  Yet, it didn't suck...it was awesome!   I'd do it again tomorrow...or maybe next year if I'm lucky!