The 10-day weather forecast left lots to the imagination.  Depending on the time of day, it gave me visions of blue bird skies with calm winds, overcast days with flag straightening winds and a chance of severe fog on Saturday morning.  All of which were experienced in two days.  My strong desire to sight fish Louisiana redfish eventually become more than I could overcome and the plan was made to go regardless of the weather. 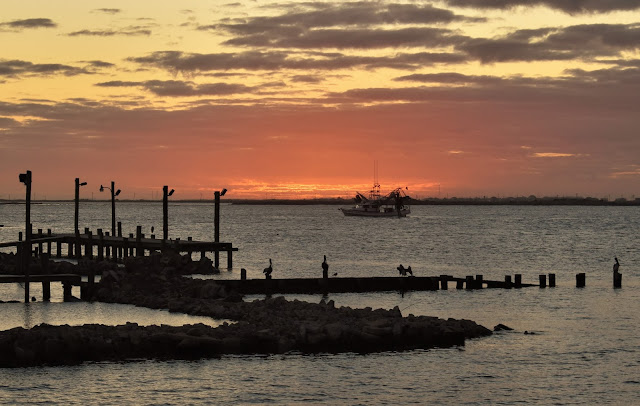 A cool breeze from the east greeted me on Friday morning.  It wasn’t the conditions that I was hoping for but I wasn’t discouraged.  The tides were low and the sun was going to be out.  More importantly, I was really hunting for one large bull red.  The kind of fish that would stand out in less than ideal conditions. 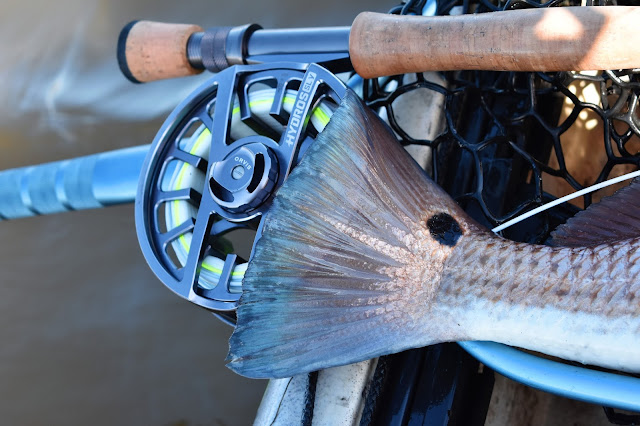 The winds were steady 10-15 mph.  It was a real workout to remain standing and scoping the flats.  In most instances, I would spot a redfish as it made its request for solitude.  The morning had shaped up to be slightly frustrating.  Fortunately, I was able to sneak up on several slot redfish but the bull red continued to elude me. 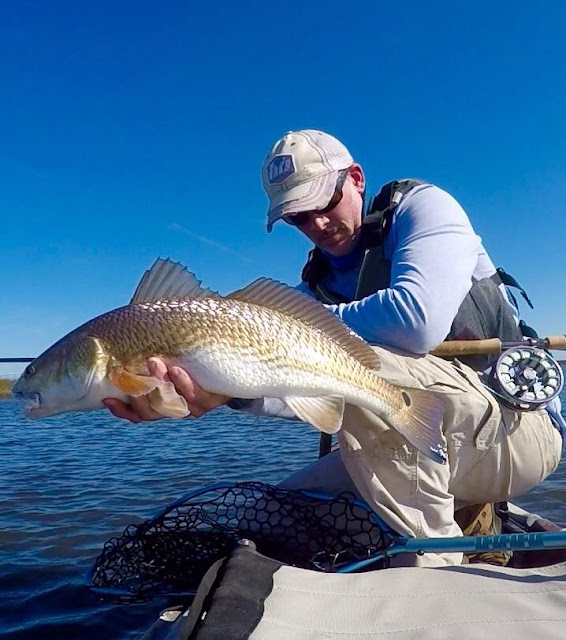 The first opportunity presented itself and dismissed itself at the same juncture.  I was pushing along a west bank when a 35” red moved between me and the grass line but heading in the opposite direction.  I tried to pivot the kayak and slowly chase it down.  But as quickly as it appeared, it was gone.  Almost like it hadn’t been there at all.  Were the wind and clouds taunting me? 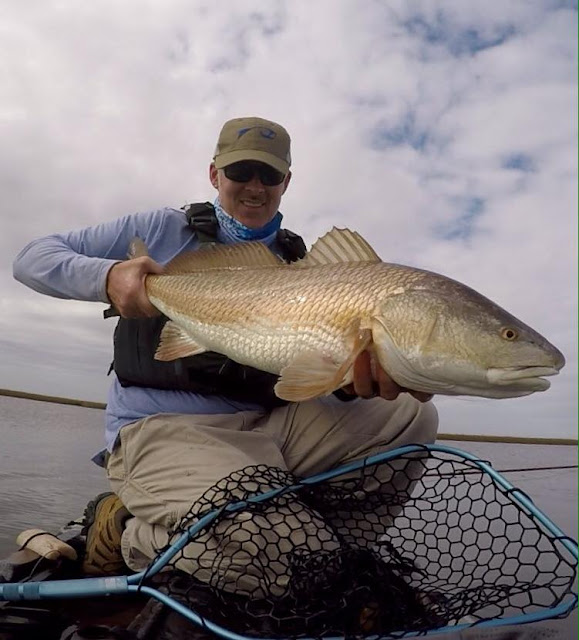 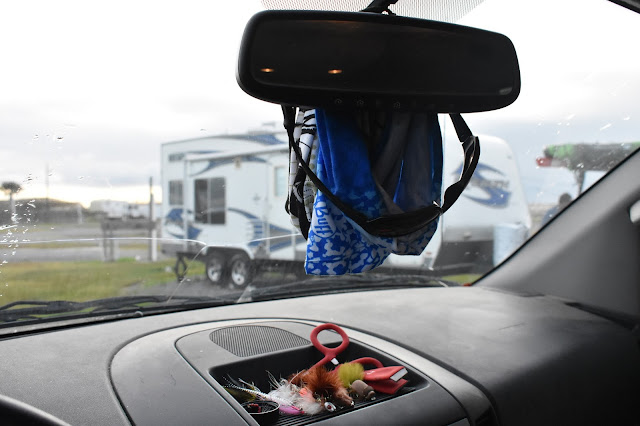 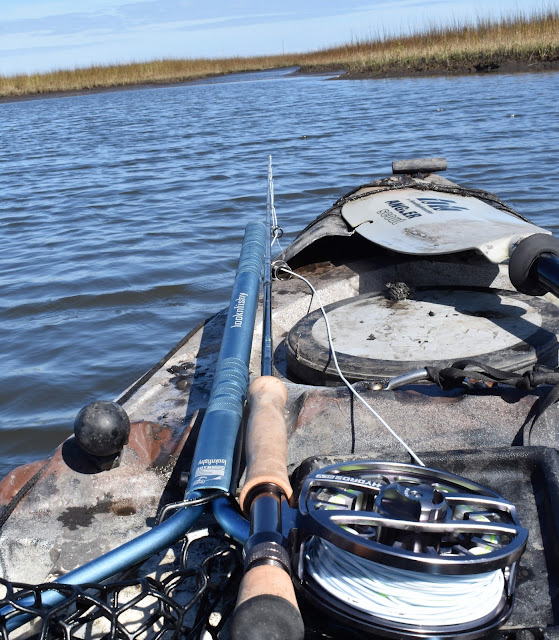 Ironically, it was that sighting that kept me hopeful.  Indeed, there were some big reds stalking the area.  I paddled across a small bay to a western bank and immediately noticed something dark patrolling the edge of a shell lined island.  As I closed the distance, it too vanished in the shadows of a passing cloud.  At this point it was nothing more than a silhouette but it elevated my heartrate. 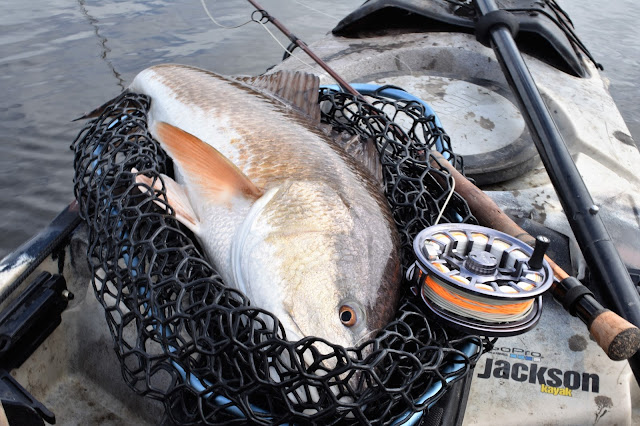 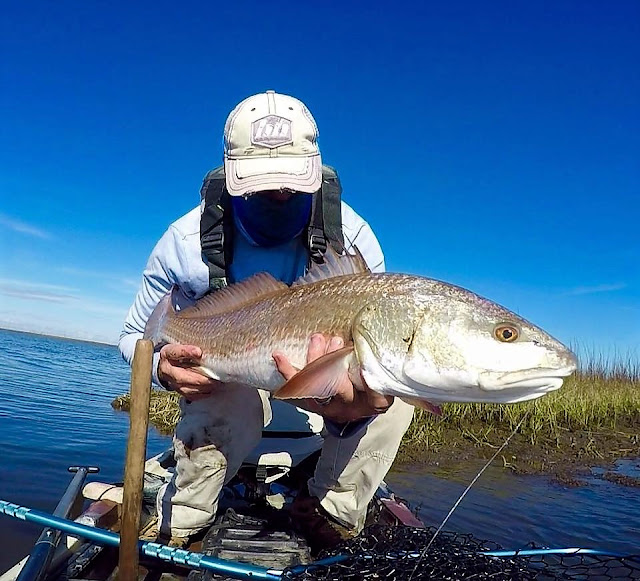 If it was a bull red, this was the best chance I had at getting a fly in front of it before it noticed a 12 foot kayak in its halo.  Then the silhouette took form as it swam on my starboard side and 15 feet off my bow.  Unbelievably, it had presented itself in the most ideal setting.  The kayak kept pace with the red while I seated the paddle and brought the fly rod to hand.  The fly landed softly.  One quick strip and the tan over white streamer paused right in front of the red.  It was now decision time. 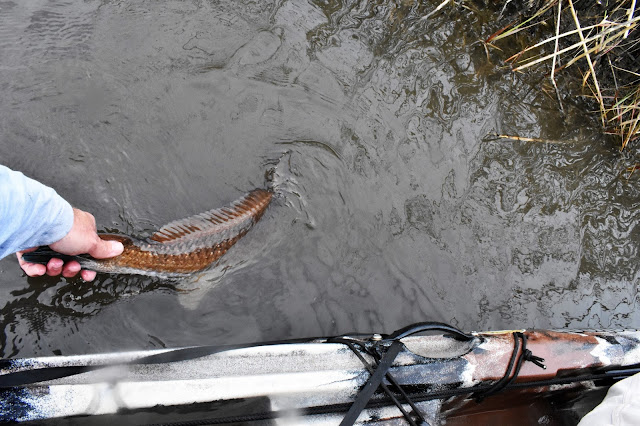 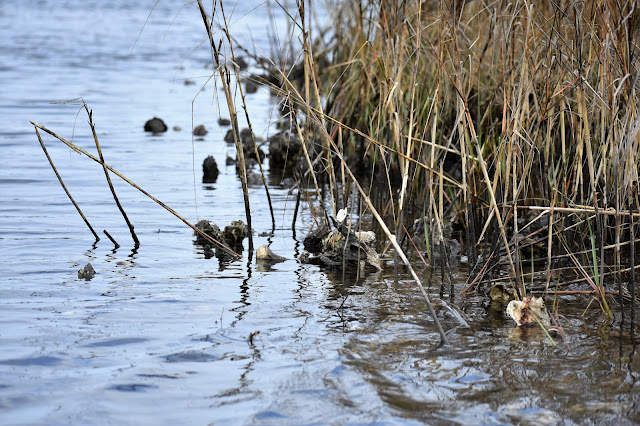 And yet it wasn’t, the red quietly turned and effortlessly sucked the streamer in.  It happened before my mind processed the action.  As nonchalant as the eat was, the next action was absolute brutality.  The water exploded as the redfish erupted in a rage of madness.  The huge gill plates flared in anger and the headshaking was tremendous.  The 8 weight was my conduit and the energy was pulsing into my hands.  Then the redfish buried its head and displayed an impressive burst of power.  The next few moments were a complete scramble as I tried to recover the line that was peeling off the reel.  With the line recovered the red looked ready to give up.  That was not the case.  Each time I tried to net it, it would dive under or around the net.  Three failed attempts to net the fish had my forearms screaming for someone to relieve the greenhorn behind the reel.  Thankfully the fourth attempt was a success because the hook fell out just as the head went into the net. 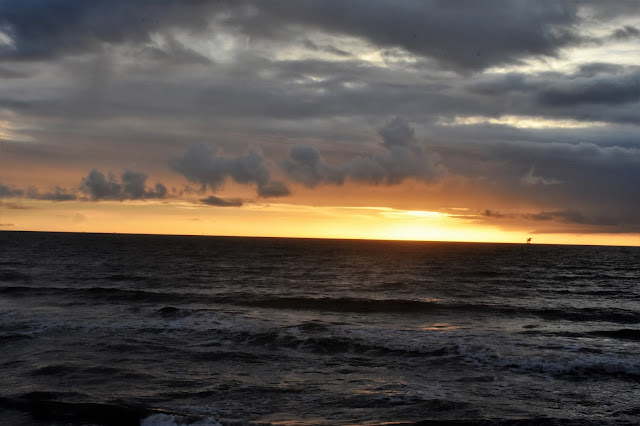 I saw three more bull reds over the weekend but never got a shot at any as the conditions weren’t favorable.  The fog and winds were so heavy on Saturday morning the prime sight fishing hours were restricted to after lunch.  However, I was completely satisfied with the weekend because I had found that one good redfish.

Timing is everything (A day on the Little Red River)

Sitting in my kayak eating lunch, thinking through the first hours of the day, I find myself questioning my decision to throw streamers all morning.  When I started, I was excited and convinced myself I was in search of one real bite.  But now I’m feeling foolish.  There have been zero flashes, misses or signs of interest in my offerings. 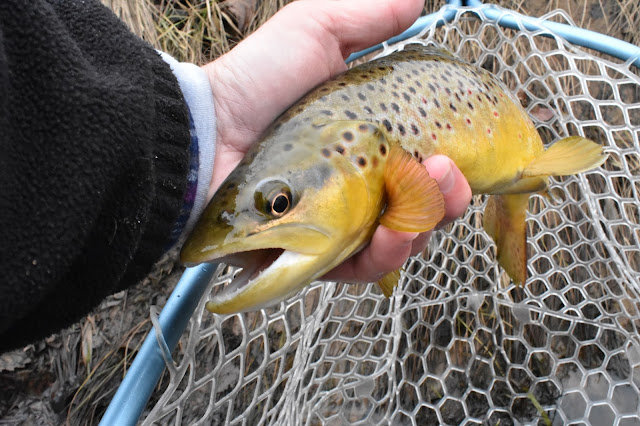 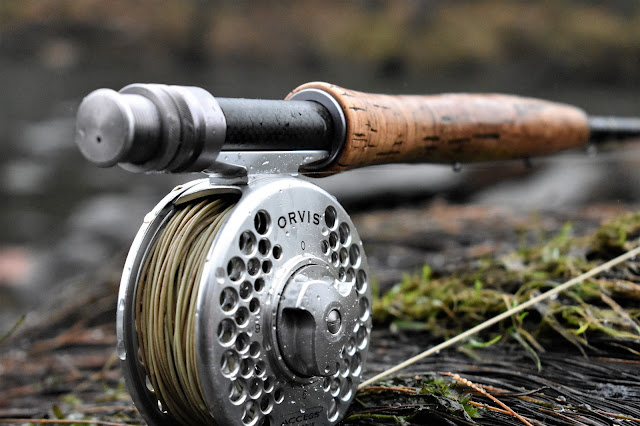 Peanut butter crackers and apple sauce, that’s what I grabbed as I ran out the door the night before.  Somewhere in the middle of the week my wife mentioned something about another sleepover.  I must have been preoccupied because I hadn’t prepared and wasn’t ready when she said they were leaving when she got home from work. 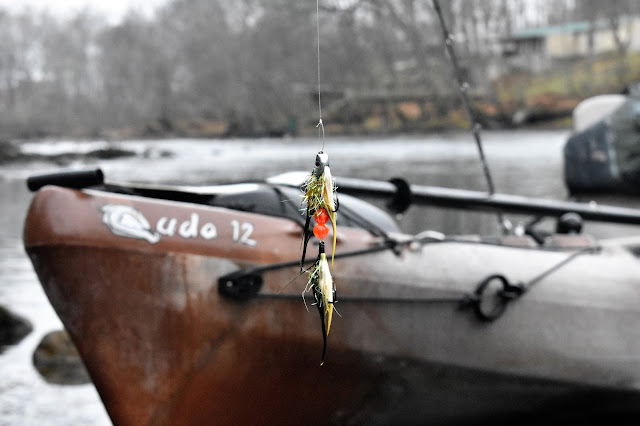 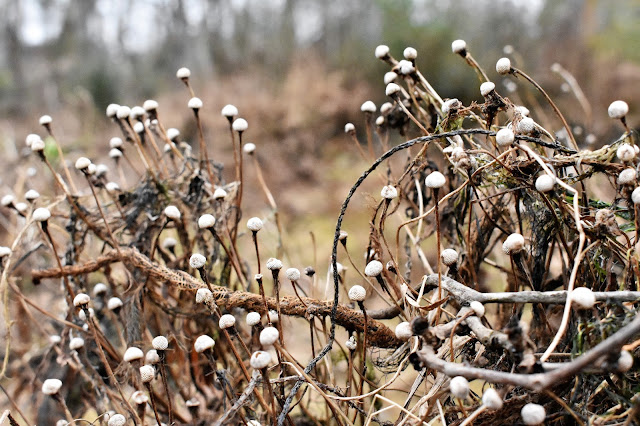 Man, those extra special nymphs I tied earlier in the week would have been nice right now.  They’re kind of useless sitting beside my vise at home.  Thinking back, I was probably tying flies while she was talking about the sleepover.  Timing is everything. 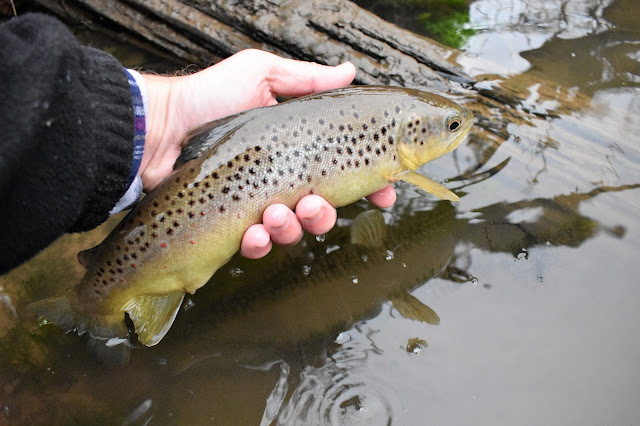 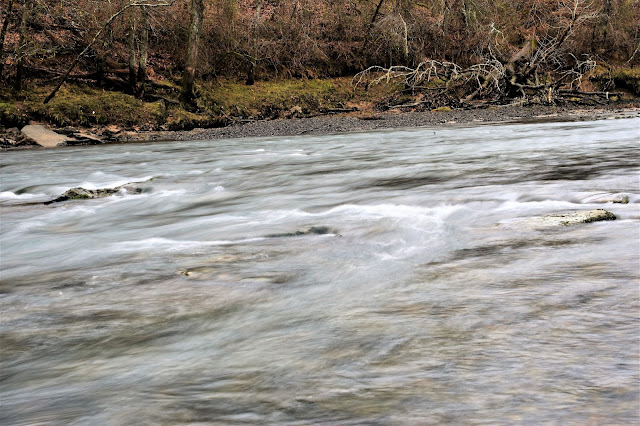 It’s been raining off and on all day but it’s a steady mist now.   I can’t decide if I want to wear the rain hood on my jacket or leave it down.  Every time I put it on I get a shot of cold rain water down my back.  The last one was just enough to make me not want to do it again. 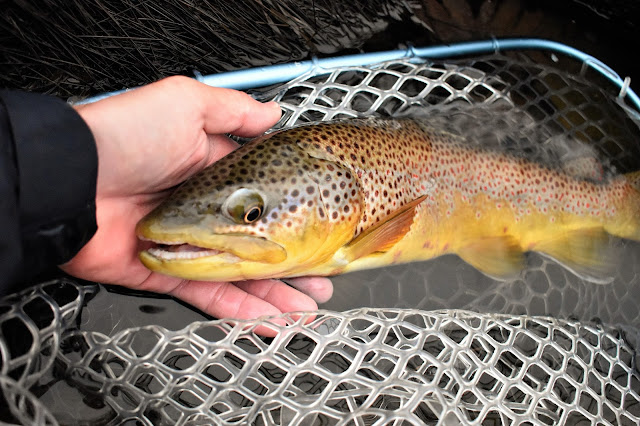 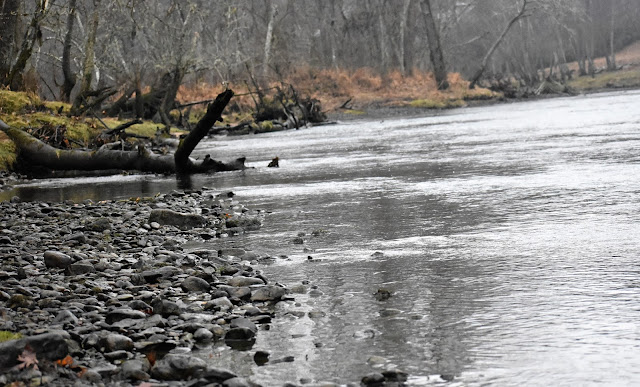 With my hunger pains defeated, it was time to find some brown trout.  They must have sensed it was lunch time as well.  A few drifts through one good run resulted in several browns in the net.  I worked a few other areas that also held willing trout.  Sensing the day was ending and I had two-mile paddle back to the launch, I started to move back to my kayak.  There was only enough time to work one last area.  On back to back presentations I pulled two nice browns from that last run.  Timing is everything!

There is a short video I made from the trip here:
http://looknfishy.blogspot.com/2017/01/video-from-my-last-trip-to-little-red.html

Video from my last trip to the Little Red River

I've really enjoyed making videos in 2016.  They are much more time consuming than writing a post but they give you a visual to go along with the read.  With that said my wife purchased me a real camera for my birthday/Christmas gift.  It's a Nikon dslr so I'm going to try and share some better quality images soon.   But until I can get that read up here's a video from my last trip in 2016.  If you open it in YouTube and run it there it'll play much better.  Let me know what you think.

Found some time to sneak away and chase brown trout on December 31, 2016.  It was cold and rainy, but the browns were active.  Here's a short video of a small brown with little fish syndrome.


Got a bunch of cool footage and caught some nice trout.  Look for a longer edit soon.  Happy New Year everyone.  2017 will be very exciting, several trips already in the works.
Posted by looknfishy at 5:33 PM 6 comments: