There are a lot of action cameras on the market now and more launching everyday.  When I was shopping for one in December 2015, I was overwhelmed with all the choices.  Ultimately, I decided on the GoPro Hero4 Silver because of the touch display and Hilight tagging feature.  I did my usual intense, borderline lunatic, up all night reading every review I could find for days.  Even the ones written in a foreign language, from countries I can't locate on a map. 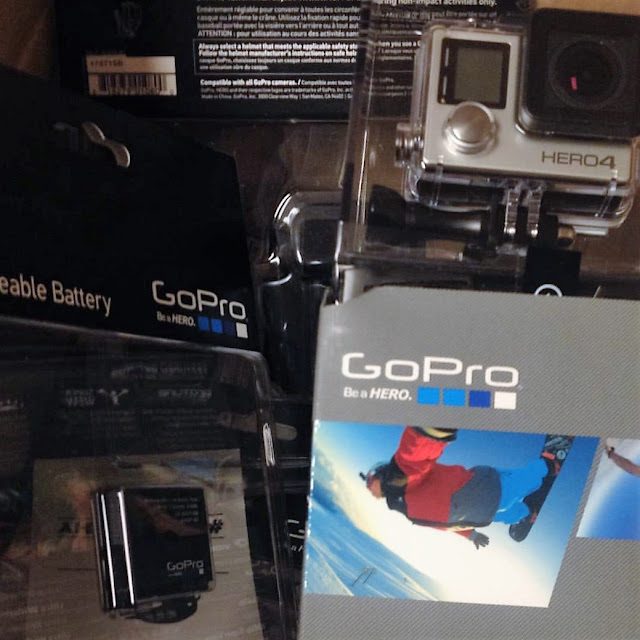 What I found was skepticism.  Some reviewers found the touch display useful.  Others not so much.  One review mentioned just making a "thumbs up" when you want to find something later.  That doesn't sound any easier than finding the frame I actually need.  I also came across several used GoPro's for sale.  A recurring theme was not enough time to use/edit. 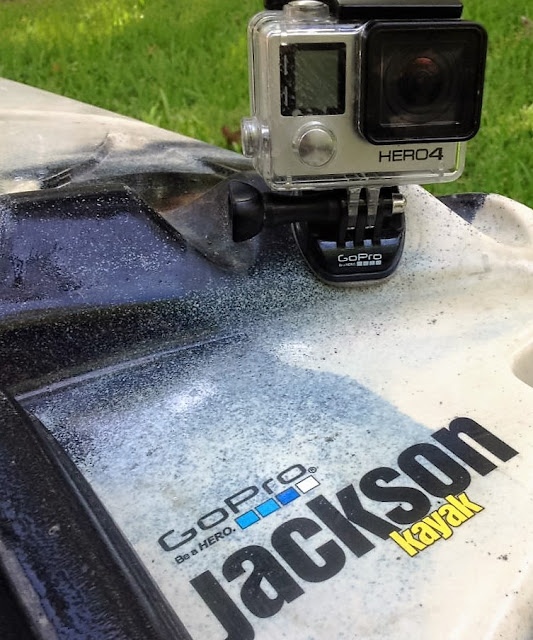 When you’re creating an edit, you’re working with short 5-10 second clips (edits) pieced together to make an interesting 1-3 minute video.  It makes no sense to spend hours finding, editing and creating a 3 minute video edit.  In my 7 months of use, I've found editing is where the GoPro Hero4 Silver shines. The Hilight tagging feature and touch display save you time later when your searching for your hero moment.  That time saved is worth being added to some clandestine groups watch list.  I'm sure I'll regret it when I'm explaining my internet search history 3,000 miles from home but it's coming with me if I go! 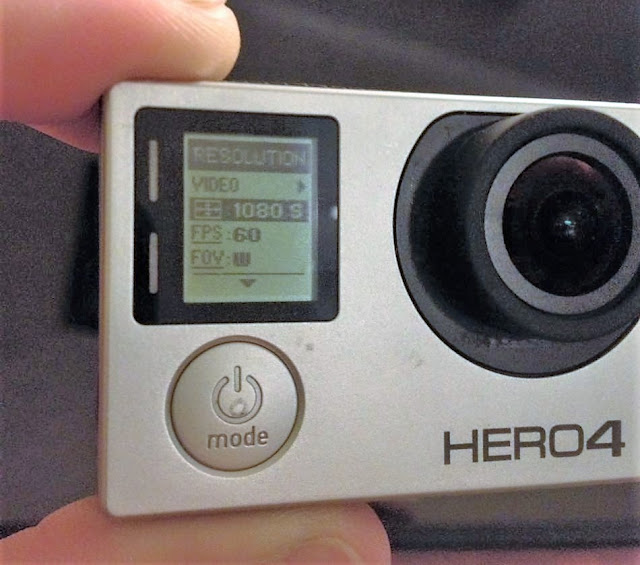 I've been extremely surprised by how useful I find the Hilight tagging feature and touch display.  They have cut my editing time in half.  I know this because the first month I'd forget to tag and then spend hours looking for the highlight in my video.  I quickly learned to use the tagging feature.  It's really simple.  Push the tagging button on the side of the camera and later find the yellow tag (you'll see).


I haven't used every setting on the camera.  There are a ton.  I stay in the 1080, superview, 60/fps most of the time because the highest video quality Youtube will play is 1080.  The frames per second (fps) basically (from what I read/understand) you get less video blurring with more fps.


The next setting I use is time lapse photo set for 1 photo/second.  Why would you want a dedicated photo over a screen grab?  Check out these pictures and you'll see the quality is slightly better with the time lapse photo.

It's especially noticeable if you zoom in or have any movement in the shot.  I've found that if there's some movement, the screen shot will likely have some blurring.  Time lapse provides better detail and quality when there's movement in the frame.  Also really useful for close up and action shots, when more detail is desired.  However, the screen grab is great when detail and clarity aren't needed, such as landscape and wide angle shots.  See below...


Still need to learn the other features but I can quickly move from video to time lapse in seconds without removing the camera from the protective housing.  The touch display allows easy and quick camera adjustments.  You can change settings, review/delete footage, switch views and so much more.

HiLight on the water use.
You're fishing and at some point you decide you have something that you want to share with the world.  Time to be a hero.  You can try the "thumbs up" find it later approach or press the Hilight button and tag your masterpiece.  I highly recommend using the button.  I struggled with this the first few trips and ended up pressing the off button, there's a lot of buttons, like 3.  I later incorporated what I call the "shut-off" in my process.  More on that later. 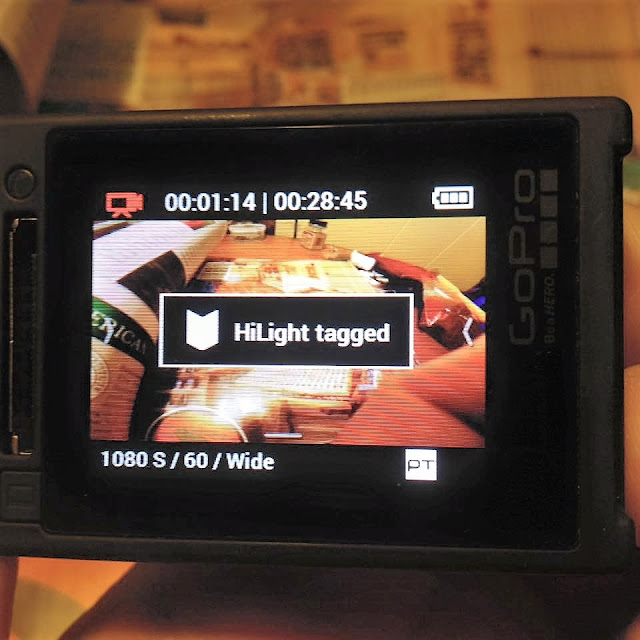 Now here's where it gets good.  You've been out a few hours and captured everything.  Not every moment is hero quality.  Let's be honest, not everything that happens in the world, or on the water, needs to be put on YouTube.  Lets just pretend we all agree and move on.  Here's how the touch display and tagging features really help.

Time to talk about the "shut-off."  I mentioned earlier about accidentally turning the camera off when I first started using it.  I discovered a great reason for doing it intentionally.  It keeps your video clips manageable.  If you leave the camera on the entire time, you'll have one really long clip and unable to delete the filler between tagged clips (*GoPro will segment the clips when you download them later).  Example, you've been fishing for an hour.  You suddenly catch a fish.  It takes 2 minutes of video to show the catch.  You basically have 2 minutes of hero quality and an hour of near misses, break offs and texting your buddy that you're "killing it."  You're ready to delete that junk.  If you've been shutting off every 20-30 minutes and after every tagged moment, you'll have twice as many clips and able to delete the filler if desired.  See below...

There is a looping feature that will record at an interval of time (say 20 min) then start recording over itself until you stop it.  I'm not sold on it because you can't see everything and the camera never misses a moment.  While reviewing a video I once came across an alligator floating in the grass that I hadn't seen during my trip.  Plus if you forget you're looping it'll record over your hero moment.  I just let it run all day and scrub out what I don't like later. 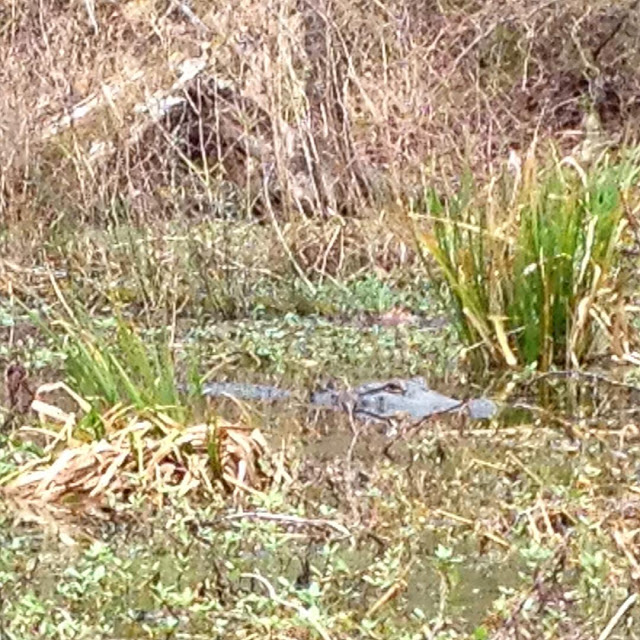 Off the water use:
It was a good day.  You race home excited to see the video from the day.  Here's a screen shot of GoPro studio and 2 clips I have loaded (upper left side of screen).  The first is the Hilight tagged clip shown with a yellow chevron.  The 2nd isn't tagged.  These tags quickly allow me to see which clips have something I want to look at first.  I still look at each clip, if I have time, because maybe you forgot to tag or just missed something cool. 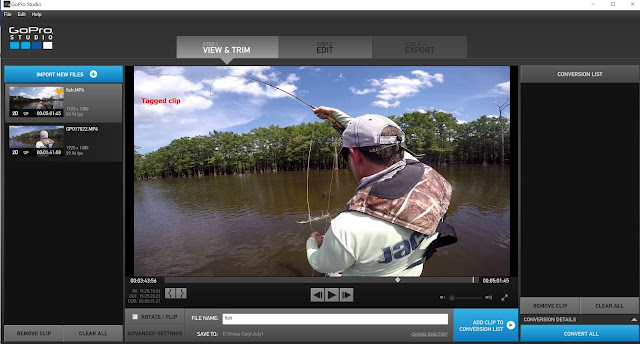 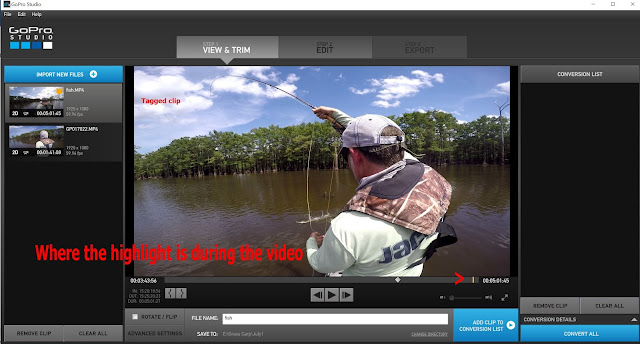 This yellow tag gets you right to the action.  I've gotten good at tagging my clips.  Ciphering through video that hasn't been tagged is as excruciating as waiting to check out of Walmart when the person in front of you requests a price check on The Backstreet Boys Christmas CD because it's on sale for $6.97 not $7.97.  Don't be a victim of a poor decision, tag and tag often.

I read concerns over battery life.  I don't have experience with other cameras and battery life so I don't feel like I'm in a position to make an educated and informed comment on it.  What I have found is I need 3 batteries for a 8-10 hours of non-stop recording.  In reality, I feel like that's more than most will ever do.  I picked up a re-fuel charger for extended trips (kept me recording during my 2 week road trip).  I'll do a follow-up review on it but initial results are very positive. 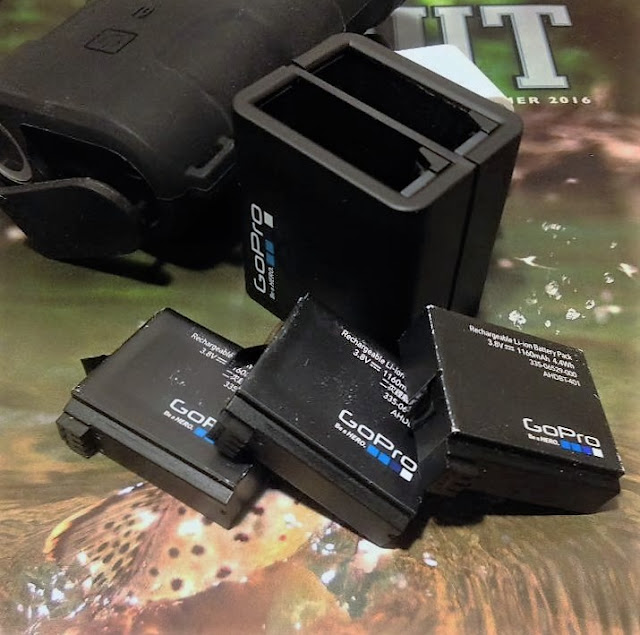 If you're trying to decide between action cameras take a close look at the GoPro Hero4 Silver.  In my limited use I've been impressed with the results.  It has captured my fishing adventures from the Florida Keys, Louisiana, Arkansas, Missouri, Iowa and Wisconsin.  You can check out my YouTube channel and see the results.  The quality is great but the real benefit is time savings when it comes to editing and creating a video like the one below.

Part 2 - I'll cover some gear I use for filming.

Posted by looknfishy at 4:32 PM