Expecting all matter of civil rebellion, the plan was to deflect then bob and weave when necessary.  I trained for weeks preparing for the upcoming exchange.  Each morning, I brought my wife a cup of coffee.  Each evening, we watched CW type shows about queens and kings.  I didn’t complain about the kidz bop dance parties my wife and kids had every night.  The training was brutal, “All About That Bass” is a terrible song on its own merit now imagine it being sung by Alvin and the Chipmunks.  And it’s stuck on repeat in my brain!  The actual conversation wasn’t as dramatic as what I imagined.  All she wanted to know was, when are you leaving and returning.  My training was brilliant or I’m an idiot…you decide.  Either way, Orvis Guide Rendezvous (OGR) here I come.

Over the next few weeks, I researched Asheville, NC extensively.  However, the amount of water in the area made it nearly impossible to make a plan.  So, I decided to take everything I owned. I left my house with camping gear, 5-10 weights, every trout to musky fly I owned and reservations at the Red Roof Inn. 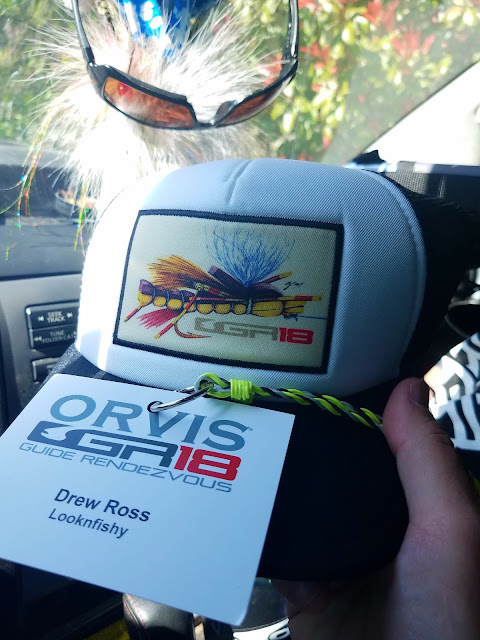 Here’s where it gets interesting.  It’s 6 am on the first morning of the OGR and there’s a noise outside my door.  It sounded like someone was trying to open the door, which was confusing because I didn’t give anyone a key.  Since I’m pretty sure it’s not my wife bringing me a cup of coffee, things are getting weird.  Then the door opens but only to the point that the latch catches leaving just enough room to see Jameson’s ugly mug smiling through the crack.  I expected to see him that morning but did not expect the guy at the front desk to give him a key card to my room.  Turns out the dude at the front desk will give out key cards as long as you promise not to kill anyone before 7:30 am, after his shift of course.  True story!

In comparison to thinking you’re about to be a victim of a home invasion, the OGR was far less hair-raising.  Setting in a room with Louis Cahill from Gink-n-Gasoline, Cameron Mortenson from The The Fiberglass Manifesto, Philip Monahan from the Orvis Blog and Dave Grossman from Southern Culture on the Fly was super cool.  The information they shared about blogging was top shelf.  It was worth driving 12 hours just to listen to them speak.  But I did come to fish. 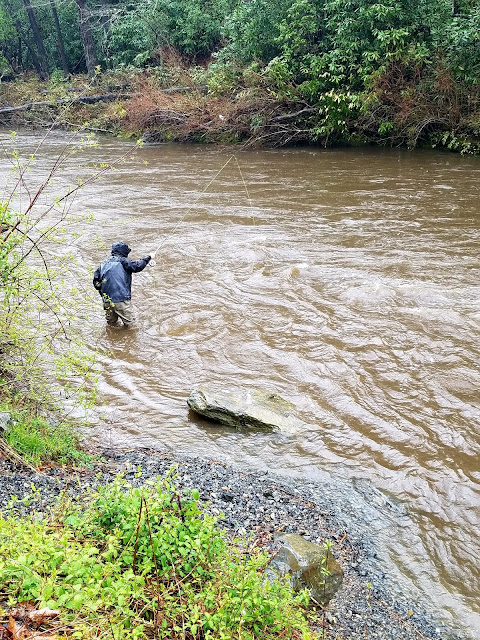 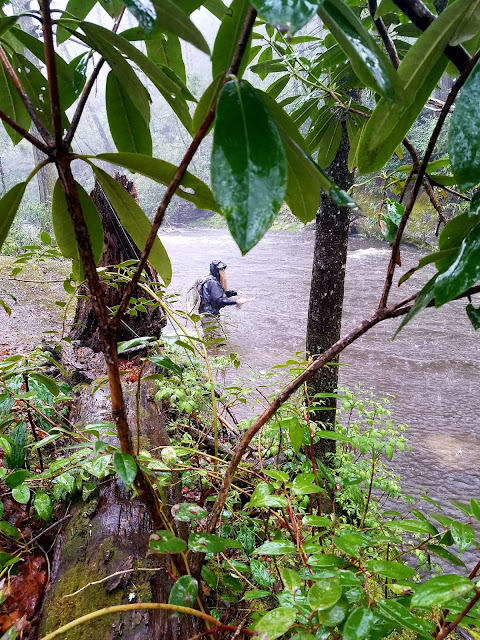 While walking through the parking lot on day one, I noticed a JK Mayfly strapped to the roof of an SUV.  I immediately knew who owned it.  When I ran into Justin later that day, I pretty much invited myself to any place he was fishing.  Justin manages the Orvis Atlanta shop but previously lived in Asheville and agreed to show me around.  Of course, the weather was perfect up until the day we planned to fish.  But we weren’t going to let 2-3 inches of rain or flash flooding stop us.


We hit a few accesses in the mountains but the creeks were chocolate milk and flowing pretty heavy.  We stuck a few bows and browns but the only eventful part of the day was navigating the swollen creeks!  Each step was a mystery.  At one point, I remember stumbling over a boulder in the soup as a branch floated into my right side.  Time to call it a day, only the day did not end at the creek!


I should have changed hotels after the key card incident.  I definitely should have moved after the 15th person knocked on the door of the room next to ours, using a distinct pattern that I had unfortunately become familiar with during the night.   But it wasn’t until 6 am when the sounds of running and a door slamming woke us up that we decided it was time to go.  An hour later, I’m talking to Justin from the 3rd floor when movement in the SUV beside him caught my eye.  There’s a woman in an old beat-up, black suburban giving herself a wet wipe bath right beside him.  How does he not see her?  Then the door to the room beside ours opened and a guy who looked like he hadn’t slept for 4 days walked out.  He made his way down the stairs before getting in the SUV with her.  They talk for a minute before driving away.


We knew floating a tailwater was the only real option for clean water.  We set our course for the South Holston.  The high for the day was 40F.  It reached that mark at 10 am and like the snow and freezing rain, fell steadily all day.  The winds gust to over 25 mph.  The conditions were brutal but we were happy to be on the water and as far away from the Red Roof Inn as possible.  Better to die on the water from hypothermia than in a meth lab explosion or deal gone bad.  No more budget hotels for me!
Posted by looknfishy at 8:28 PM No comments: