This was one of those trips that was literally planned two weeks ago.  My family and I were driving to Russellville, AR for our daughters 8U softball tournament when we realized, it's almost the middle of summer and we haven't planned a family vacation.  The last few weeks have been really hectic with practices and camps.   I didn't think my wife would actually find my idea attractive but I presented her the possibility of road tripping to Wisconsin, where her and the girls would fly home.  Leaving me to explore the "Driftless" area in Wisconsin.  It doesn't happened very often but she actually liked one of my ideas and the plane tickets were purchased in the next 30 minutes.  The plan was to start driving on June 30th and make our way to Minneapolis, MN for their flight on July 3rd. 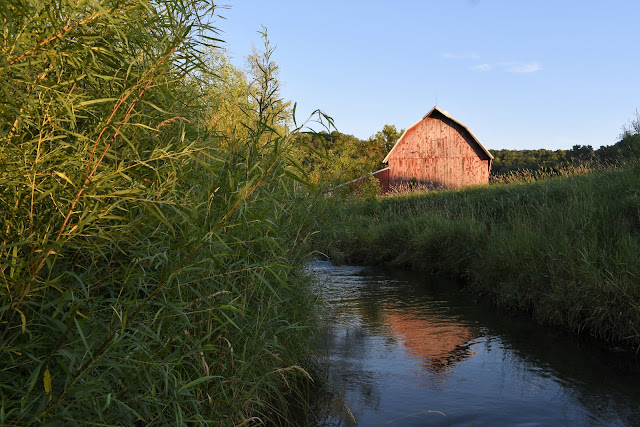 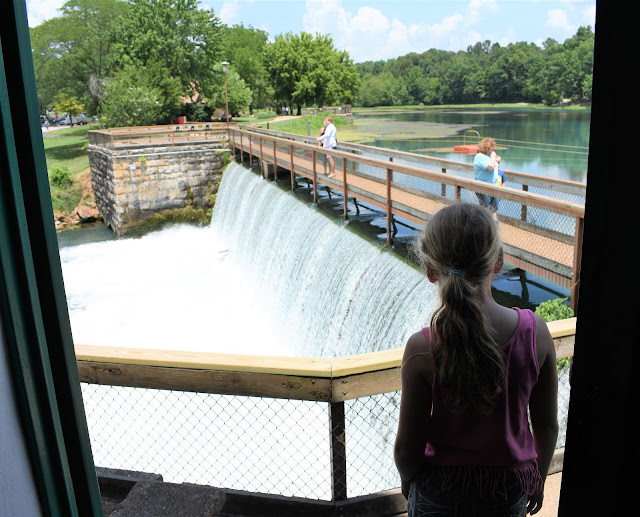 There were no more plans from that point.  We decided on our route each morning and just went where it felt right.  The first stop was at Mammoth Springs State Park in Northeast Arkansas.  I couldn't remember if I had ever seen Arkansas' largest spring but I knew my girls had not.  We arrived just in time for lunch out of the minivan and then walked around the park for an hour. 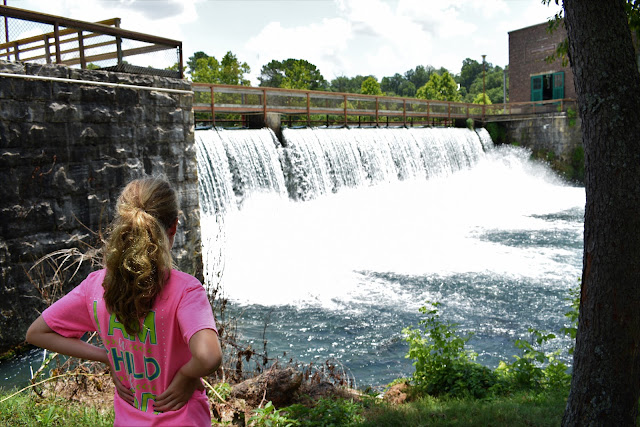 My wife asked our oldest daughter if she liked the waterfall, to which she replied, "it was a mill, waterfalls are natural."  In spite of her informative Webster 's awareness we could tell she was having a good time.  We loaded up and started driving, destination unknown, only that we would be taking the scenic route.  We made a quick stop in Jefferson City, MO but decided to push on the Columbia, MO for the night.  We ended the evening letting the kids swim for an hour or more. 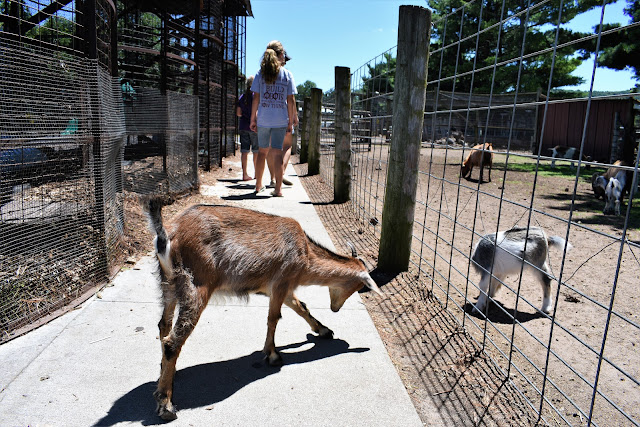 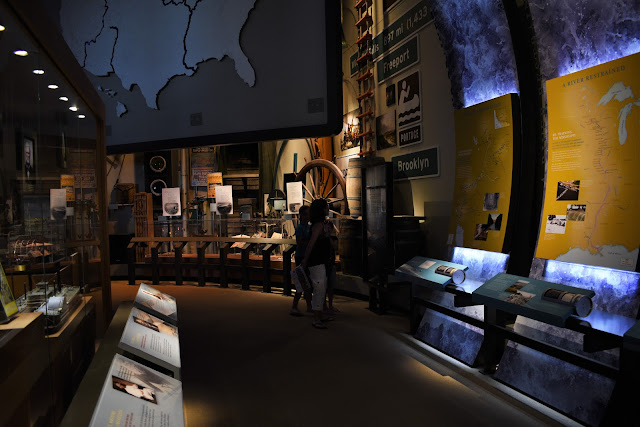 We made it to Dubuque, IA and spent the afternoon touring the National Mississippi River Museum and Aquarium.  After some ice cream in the historic area we loaded up and continued to Madison, WI. We ended the 2nd day of our road trip eating dinner near the Capital and more swimming at the hotel. 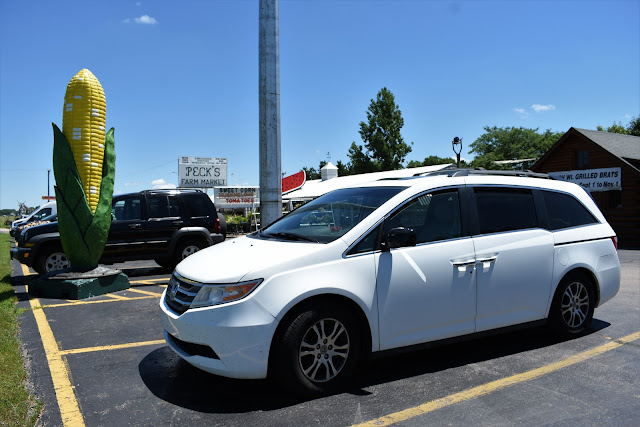 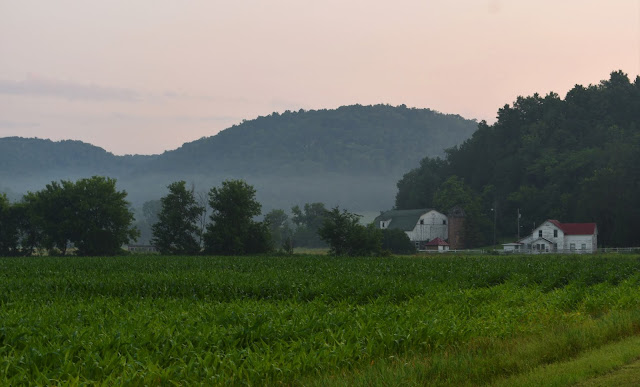 Tuesday we kept to our "no plan" is our plan and left Madison in a general direction of Minneapolis, MN.  My wife insists on navigating with an old Rand McNally road atlas we purchased in 1998 on our very first road trip from Little Rock, AR to San Diego, CA.  It's only slightly embarrassing because it's the size of a pizza box and her windows aren't tinted.  However, no kidding it's still more accurate than our Garmin "recalculating" GPS unit. 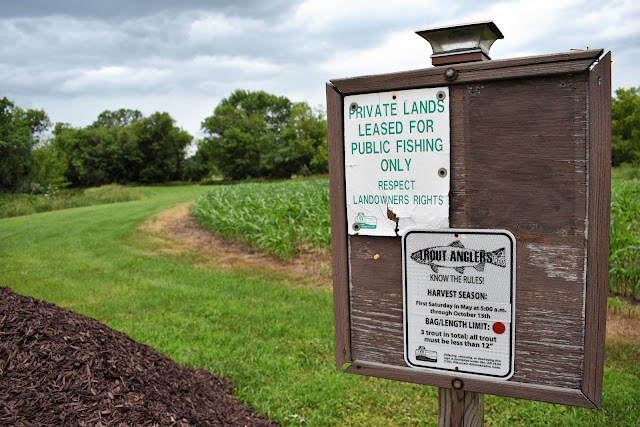 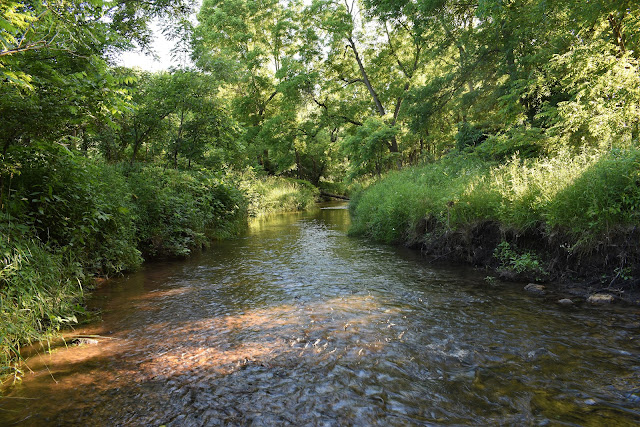 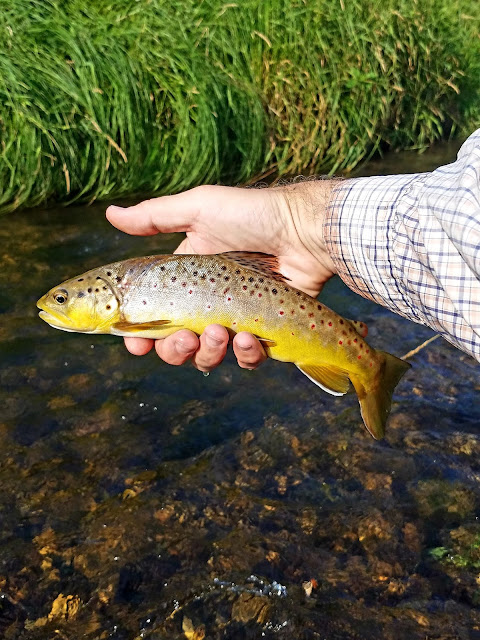 Full disclosure, I had no idea what route we were taking but as we drove in to Viroqua, WI around lunch I knew where we'd stop next, the Driftless Angler.  I had every intention of visiting the fly shop after they flew home but couldn't drive past without stopping.  I picked up a sticker and some flies in exchange for fishing intel.  We were in and out of the shop in under 15 minutes!  Not far from the shop was a shaded park that was perfect for lunch.  After an hour we continued on our way to Minneapolis, MN, where we ended our family road trip.  Their flights left at 10:30 am the following morning.  I get to stay behind and fish the "Driftless". 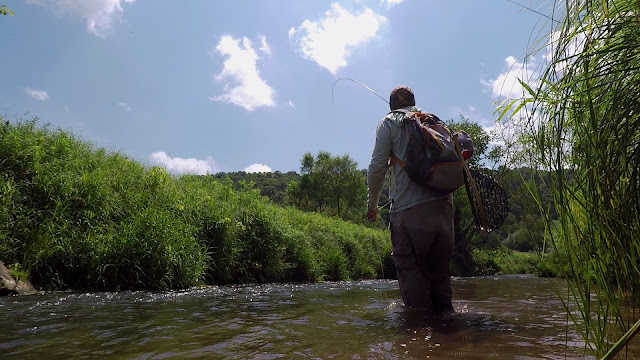 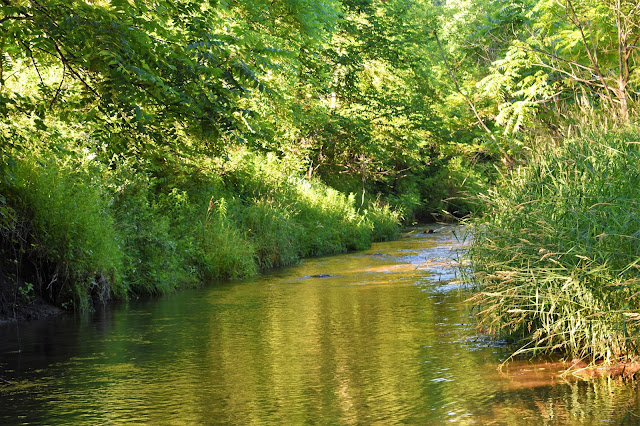 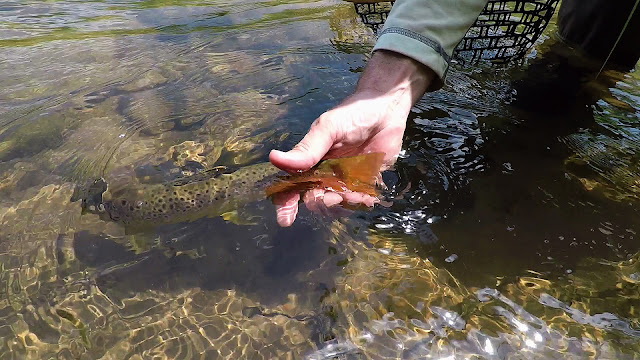 This would be my first trip to the Wisconsin Driftless.  I have made three trips to the Iowa side, Click here for Iowa Trip, and find it stunning.  After three days I can tell you the Wisconsin side doesn't disappoint.  I brought camping gear and planned to camp but with severe weather in the forecast the next day I opted for the cheap accommodations suggested while I was at the fly shop.  I figured I'd camp after the storm but was almost killed by black flies (watch the video and you'll see) and decided to keep the room. 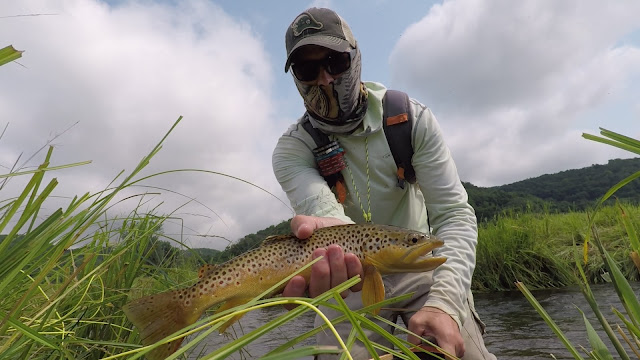 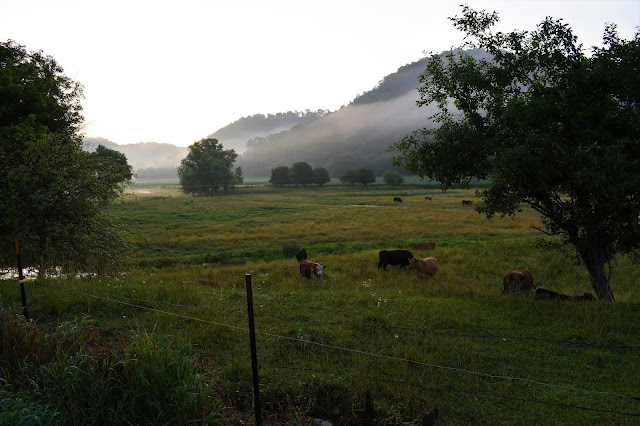 After securing my room, I ventured out to my first spring feed stream in Wisconsin.  I drove past it twice before I located the small public parking area.  If it weren't for the bridge that crossed the water, I would have never believed it existed.  The fun begins... 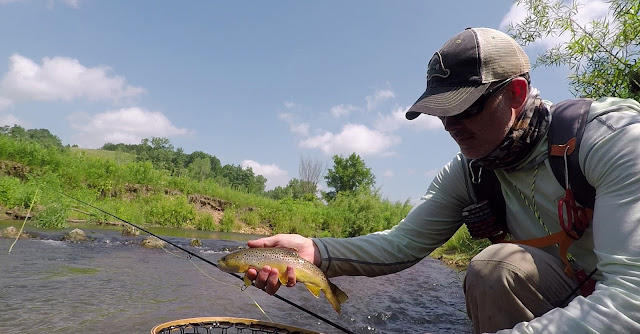 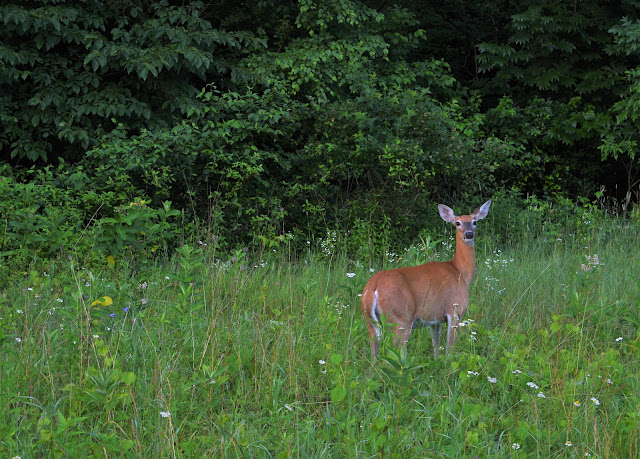 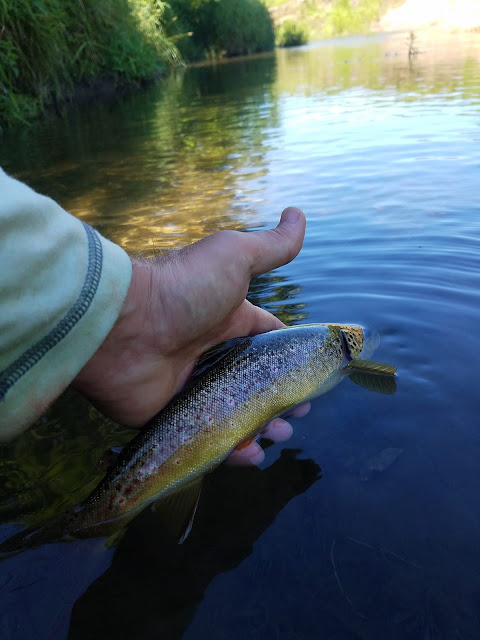 In truth, the more I explored the easier it became to locate the public areas.  Some of the water, like the Coon and West Fork of the Kickapoo were not difficult and they fished well.  A dry-dropper rig took many fish.  The browns would readily rise to the dry when the clouds were out and eat the dropper when the sun was high. 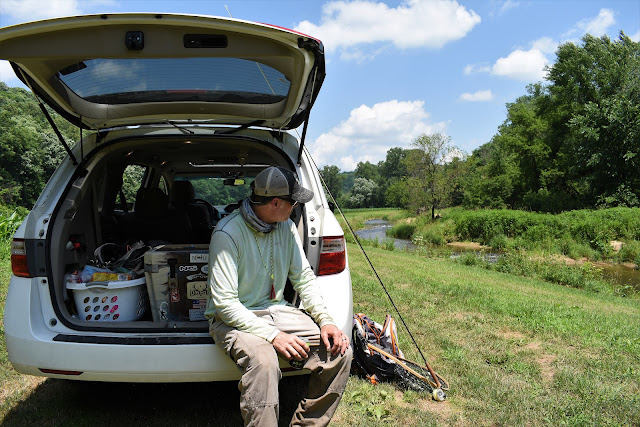 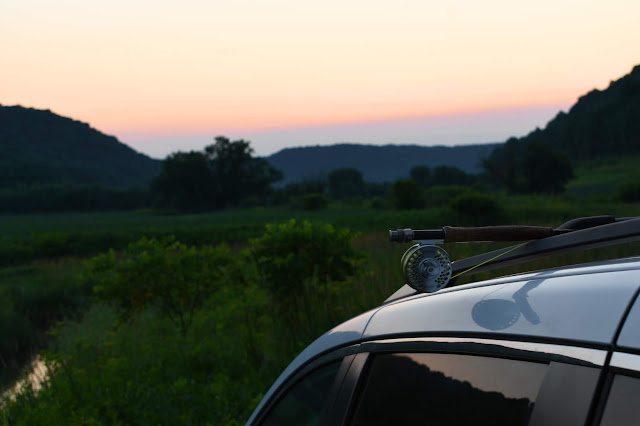 However, my favorite creek was a no-name that I stumbled across while looking for another access.  I'm not 100% certain I wasn't trespassing but there was a sign and boot cleaning station beside the bridge which leads be to believe I wasn't.  This stream was tiny and the only way to fish it was to stand in the cold water.  The browns were everywhere and I saw several that might have been over 20".  It would be a real treat to visit it again with a better approach and more options.  The dry flies I had were just slightly too large.  Those mature browns spooked so easily.  It was super cool seeing those large predators in such a tiny creek. You know they are the real property owners and impose their will on all that trespass.  They were just too intelligent for me on this trip.

And here is the video from the trip.  Now time to prep for Colorado...

Posted by looknfishy at 9:30 PM