If you asked me in May where I would be in July, I would have looked at you and shrugged my shoulders.  I had some plans and knew I had the support from my wife to leave for 14-17 days with travel but the world of Covid had restricted so many destinations I simply did not have a clue. 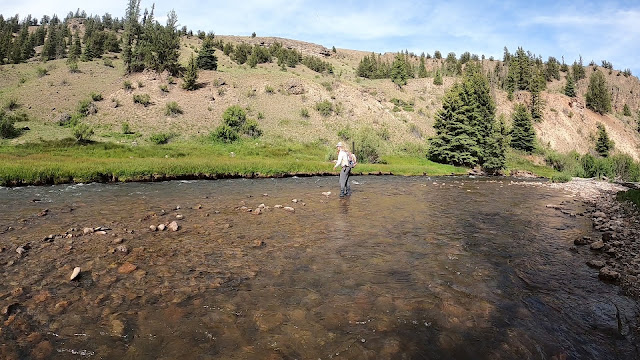 As May melted into June and runoff quickly ended in Southwest Colorado, I began to get a picture of the general direction I would head.  The area is full of off-the-grid streams and dispersed camping areas, one could easily disappear for two weeks, no question!  And that would ultimately be my plan.  Leave civilization behind for the next couple of weeks. 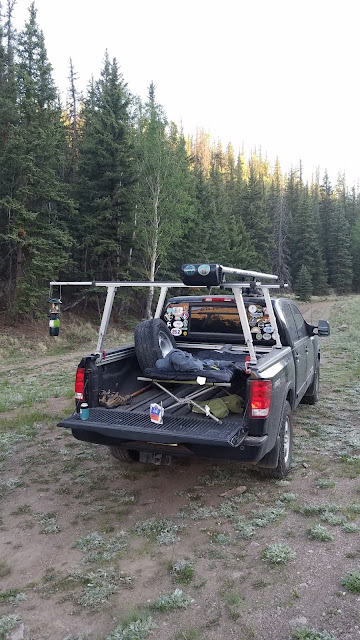 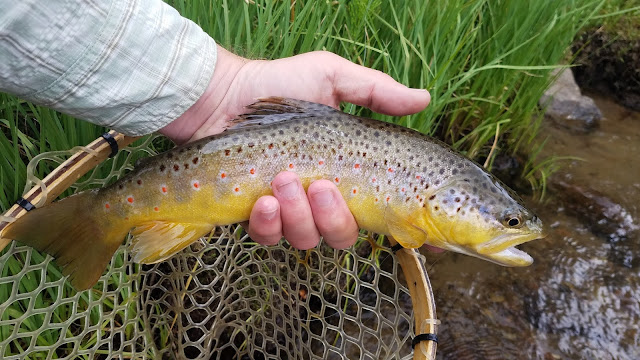 I started combing the internet for any and all information available around Creede, Colorado.  It was a point on a map that I had not considered during my travels to Colorado before, but it was close enough to the Conejos area that I felt confident enough to tackle it solo.  Worst case, if it was a bust, I could relocate to the Conejos area and salvage most of this trip. 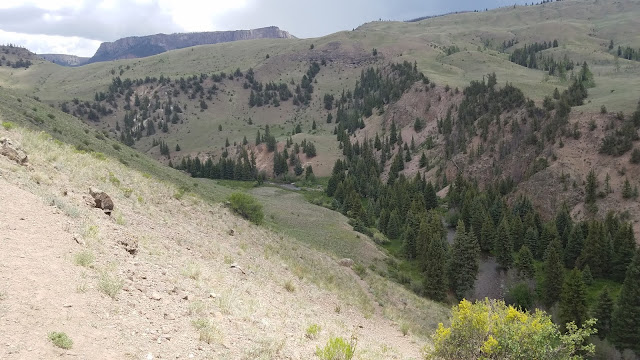 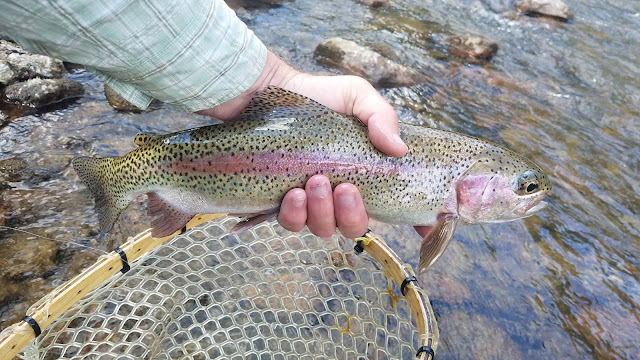 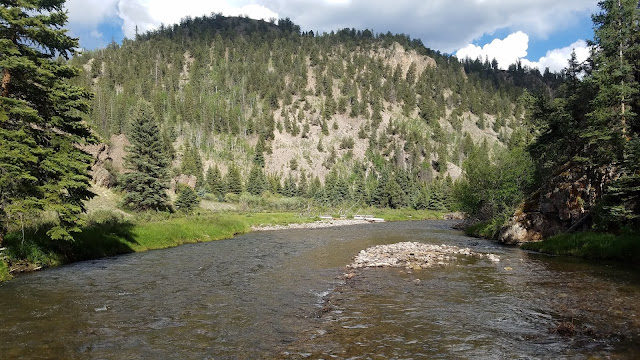 After 14.5 hours on the road, I had reached the jumping off point for this trip, Alamosa, Colorado.  Effectively the point you need to decide if you're heading north or south.  With the truck pointed north towards Creede the adventure would begin in 2.5 hours. 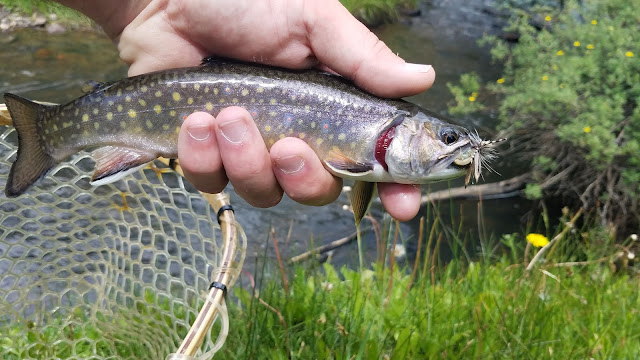 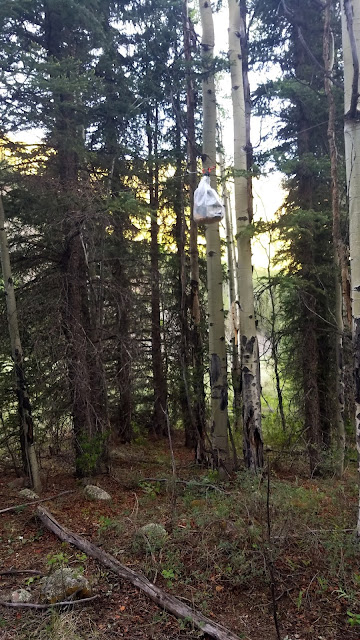 I arrived at my first location and quickly remembered the scale of traveling in Colorado.  What looks like a 3 mile dirt road, which might take 30 minutes to travel, will more than likely take an hour or more.  Such was the case with the first stream.  It seemed easy enough from google maps.  But dead fall, elevation and boulders the size of basketballs require some patience to travel.  I was thankful to be in a vehicle with high clearance, 4wd and skid plates.  In fact, this road would actually be one of the easier to travel and on one occasion I had to turn back after a 3 hour drive. 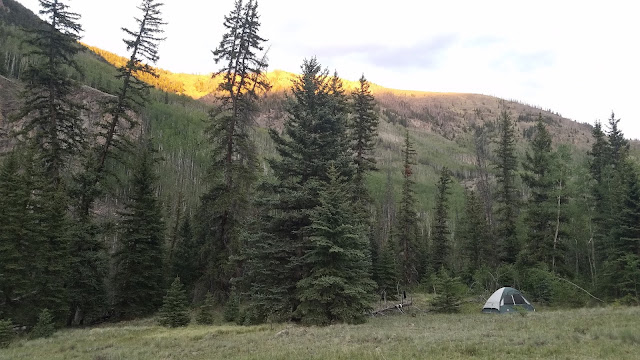 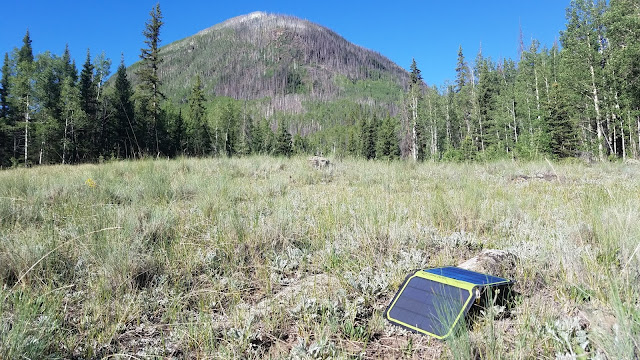 The stream wasn't visible from satellite maps so I wasn't really sure what to rig up first.  I assumed my Orvis superfine carbon 7.5 ft 3 weight would work but I also packed a 4 weight just in case.  After hiking down, I was excited to see the water was perfect for a 3 weight.  Let the games begin! 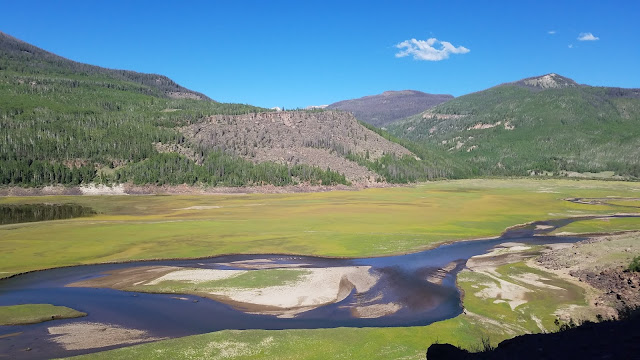 The next few hours were such a good time I didn't notice the clouds forming until the rain was coming down.  Funny how, browns and bows rising to dry flies will make you lose all awareness of your surroundings.  I just kept searching for that next hold and trying to get flies under or near the likely spots.  The rain didn't last long and the sun was out again.  Mayflies and caddis were in the air and fish were actively looking for them on the surface.  It was a great afternoon. 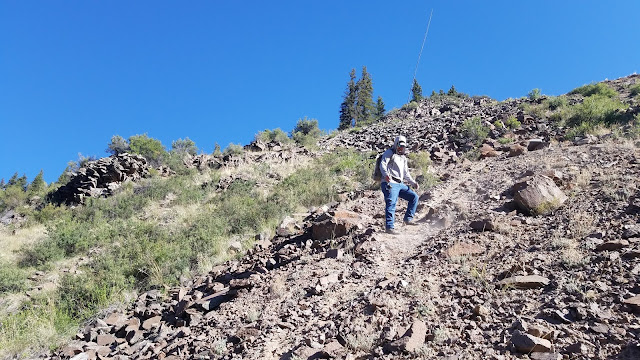 My original plan was to relocate after this stream.  But the drive in and the incredible fishing made it impossible for me to leave.  I set up my cot in the bed of the truck and spent the next two nights on this stream outside Creede, Colorado. 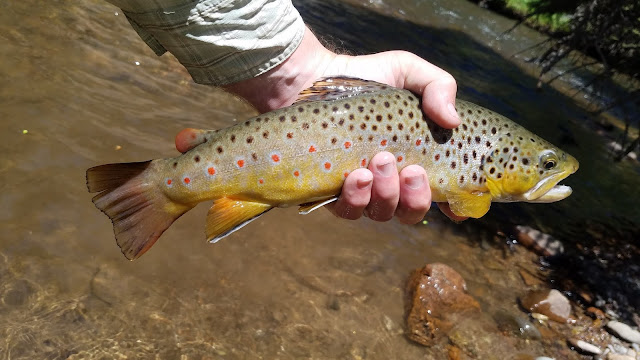 Eventually, the time came to relocate.  My next stop required a 6 mile hike into a remote stream in the Weminuche Wilderness.  I was delayed getting to the start by ranchers moving cattle up the forest service road.  But that wasn't a big deal, I had planned to camp for two nights. 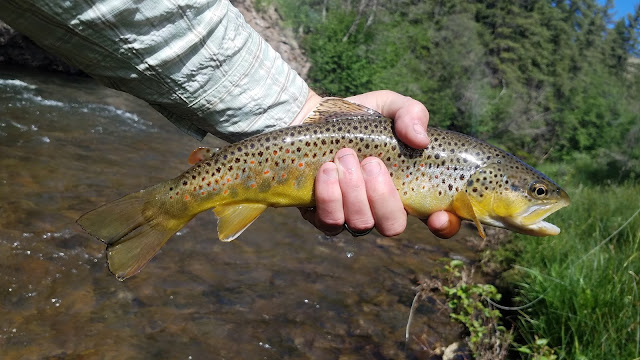 After hiking down nearly three miles and then dropping into a valley for the next three miles, I was finally close enough to hear the stream.  Although, I still had not seen it and again, had no idea which rod to rig first.  I brought my 3 and 4 weights on this backpacking trip and went with the 3 weight to begin. 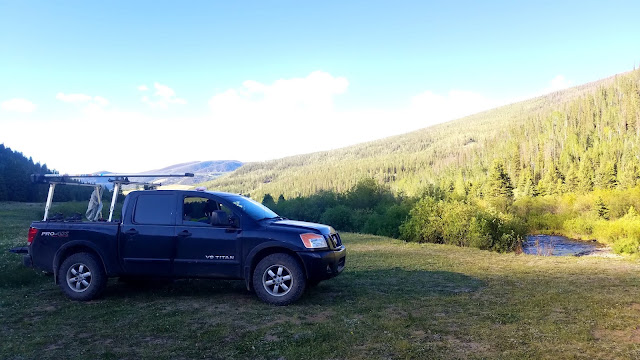 After making my way to the water, I realized I really needed two 3 weights.  The 4 wasn't going to help much here.  The freestone stream was smallish and somewhat overgrown.  Where I was camped, the water was pretty fast, with small pockets and overhanging brush.  Casting had its challenges but several wild brookies and rainbows ate the size 12 dry I was drifting.  About a mile up, the stream opened up more and the gradient slowed.  I found a native rio cutthroat and several nice rainbows.  The size and willingness of the fish increased as the day and water passed.   There were several streams that emptied into this one and each had it's own flavor.  Not many photographs were taken but I did GoPro the entire trip and that video is linked at the bottom of this post. 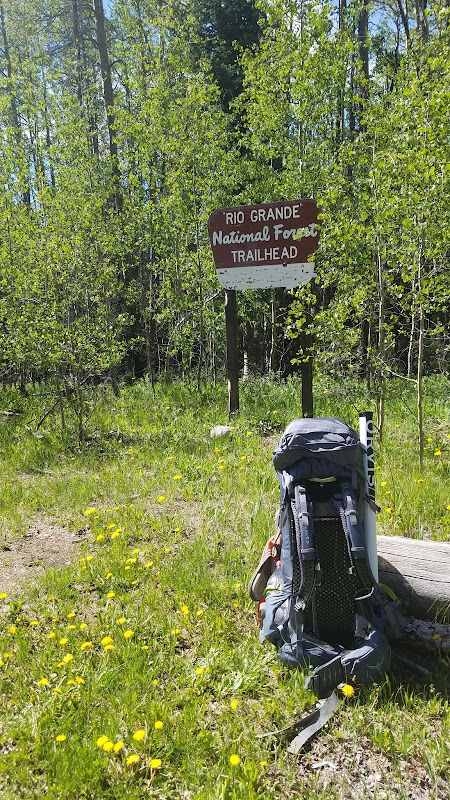 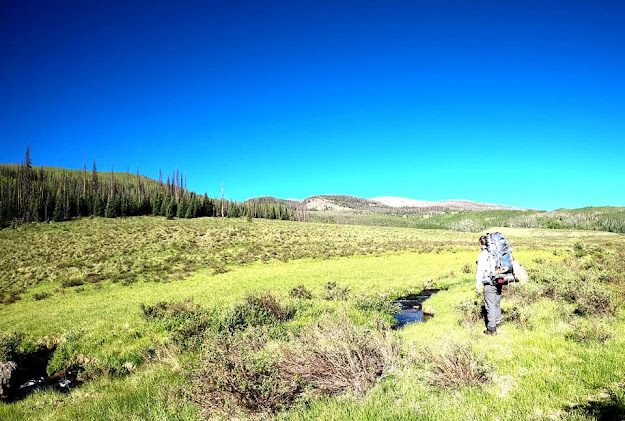 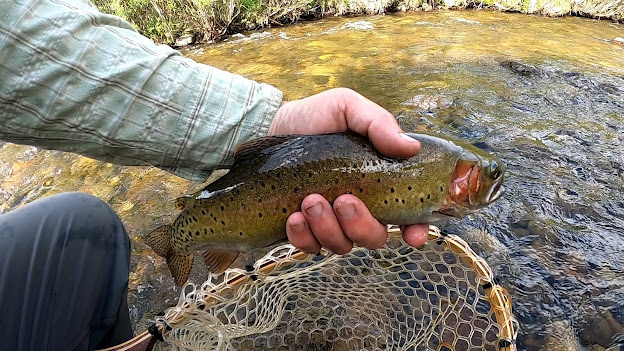 The next two days, weren't much different.  The action was slower in the morning but became intense in the afternoons.  Mostly, because the temperatures started near freezing and warmed to over 70 each afternoon, bringing lost of bugs out!  Overall, it was an amazing experience and an adventure I'll never forget. 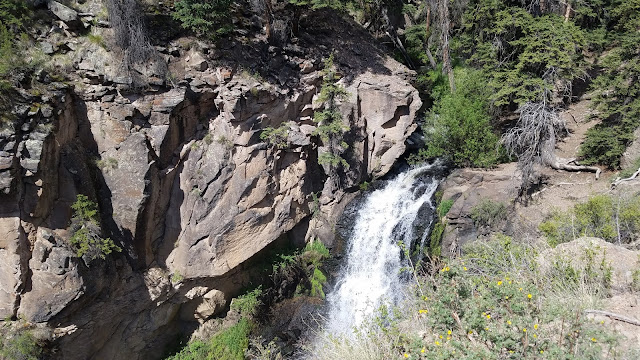 I hiked out and set-up my next camp in the Rio Grande National Forest for days 5 and 6.  While planning this trip I knew I would be tired after hiking out so I opted for a stream that was near a road.  What I read about it stated, "the stream sees some traffic but fishing is ok on the upper end."  I was only planning one afternoon and one night, so I was cool with it not being super remote.  I planned to wake up early and dive to a very remote stream the next morning anyway. 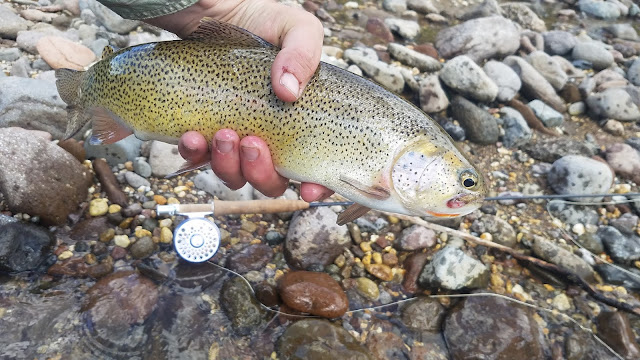 The fishing was actually really good.  My decoder ring for Colorado shows...when someone from Colorado say's fishing is "OK".  To the rest of us not from CO, WY, MT, UT or ID...it's going to be great!  Atleast, I think 15-25 browns and one cutbow on dries is pretty great!  Especially, since it was only a few hours in the afternoon, and easy road side access! 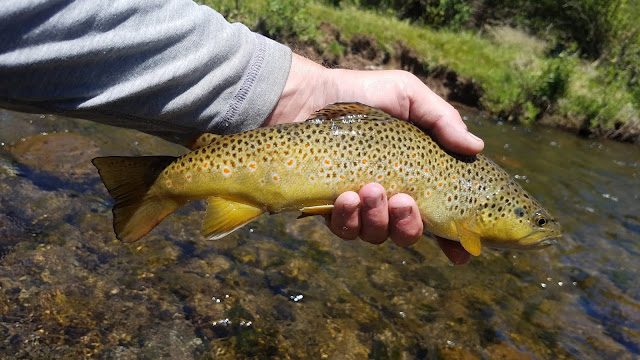 The next morning, I woke early!  Excited about the remote stretch of water that required a 3 hour drive up a forest service road.  I'll skip to the part where I was a mile up the road and it started to go straight up with giant basketball sized boulders everywhere.  Eventually, I made the decision after going about a mile up to turn around.  This road did not appear to go anywhere near the stream.  In my research, it looked like it did but I never found any evidence or read anything that explicitly said it did.  On the way down a group of OTV's and doonbuggies stopped so I could get by.  I quickly waived one of them down and confirmed the road didn't lead to any stream.  The only way was a  hour drive around the mountain.  Bummed, I headed back to where I started and regrouped. 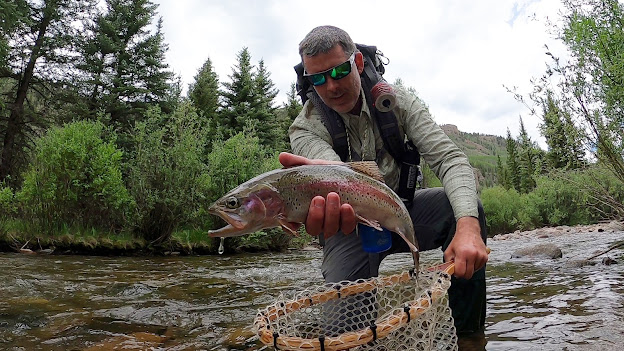 A buddy from Denver, was driving down the next day (Friday).  So I touched base with him and we made a plan to fish two streams.  One was a favorite of mine, which he had never fished.  One was new to us both. 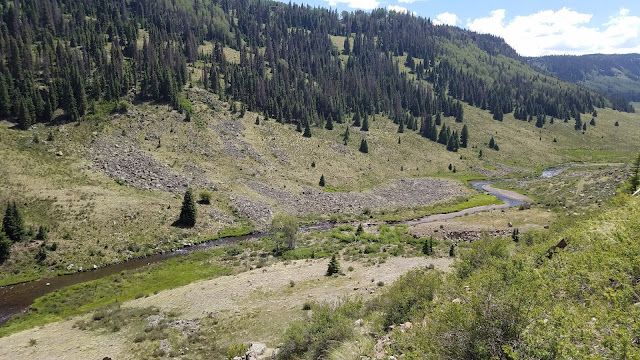 Saturday started with a 2 mile hike and drop down to the stream.  The fishing was super, in spite of the 20-30 mph winds.  I opted for my Orvis H3f 10ft 4 weight because if the extra wind and added reach.  We both lost count of the many browns and rainbows we caught on dries.  Eventually the sun started to fade and we had a 3 or 4 mile hike out. 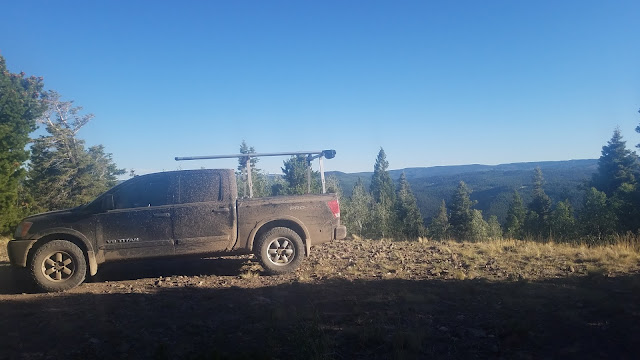 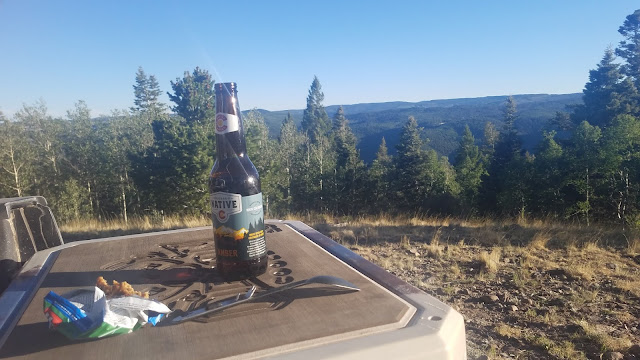 The next day, we loaded camp and made the 2 hour drive to the stream neither had fished.  It wasn't suppose to be an adventure but with lack of information and a high sense of, "we'll figure it out" we parked and hiked down a dried up creek bed, which we knew would end at the creek. 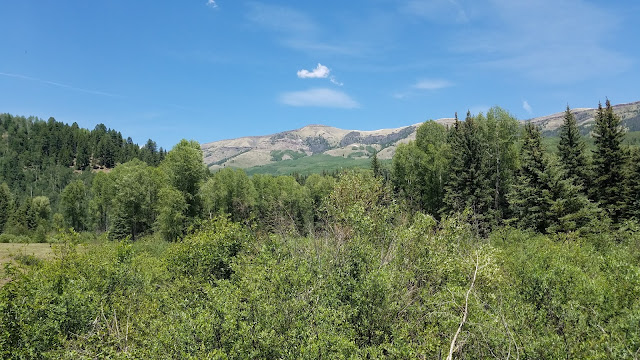 It did not.  It never really ended or changed, it simply turned into a maze with a herd of cattle sprinkled in at different points.  We'd followed a path down a rabbit hole and after an hour decided to turn back.  After locating a new trail and following it for an hour, we finally found water.  And it looked magnificent...the 12 tents and the family having a reunion on its bank thought so too! 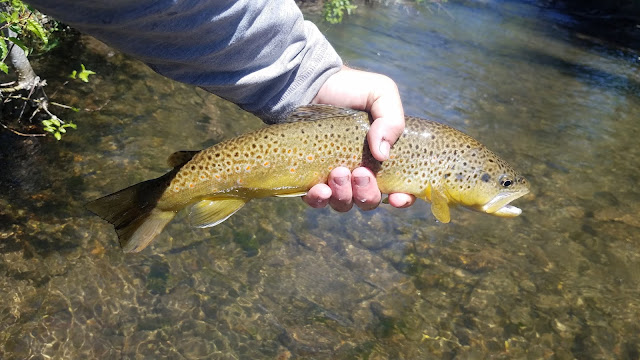 After walking another 45 minutes we found the remoteness we came here for and the brown trout were hangry!  My buddy had to leave at 3pm so the outing wasn't a long one but we both decided we'd come back and explore more of this watershed.  Judging from the map, we still had over 8 miles of water we never laid eyes on.  Still, in that short time, we both caught and saw many browns eager to take large attractor dries.  On the way out, we located a well worn trail that led right to the road we had parked on.  It took maybe an hour to hike out lol!

Fly Fishing the Weminuche Wilderness - backpacking into a remote stream.

Posted by looknfishy at 3:41 PM