Found some time over a busy weekend of last minute shopping and visiting with family to sneak away and spend an afternoon on my favorite Ozark tailwater.  Here's how it all unfolded.  I got a call from my uncle Thursday afternoon, he wanted to go float the Little Red River, and wanted to know when I was going again.  I didn't have anything planned until January but since it was a family event, figured I could convince my wife it was a good idea.  All she asked was that I spend Saturday with her in North Little Rock finishing our shopping.  That may not sound like much...but trust me, it's a fair trade.  I hate traffic, shopping, and crowds...multiply that x100 on the weekend before xmas...and I made a real sacrifice.  Seriously, ever been in Toys-R-Us, 5 days before xmas...I think it's possessed...normal people do CRAZY things in that store.  I maintained my sanity (relative, I'll admit) by keeping my mind completely focused on one thing...FISH'N.  That's my secret. 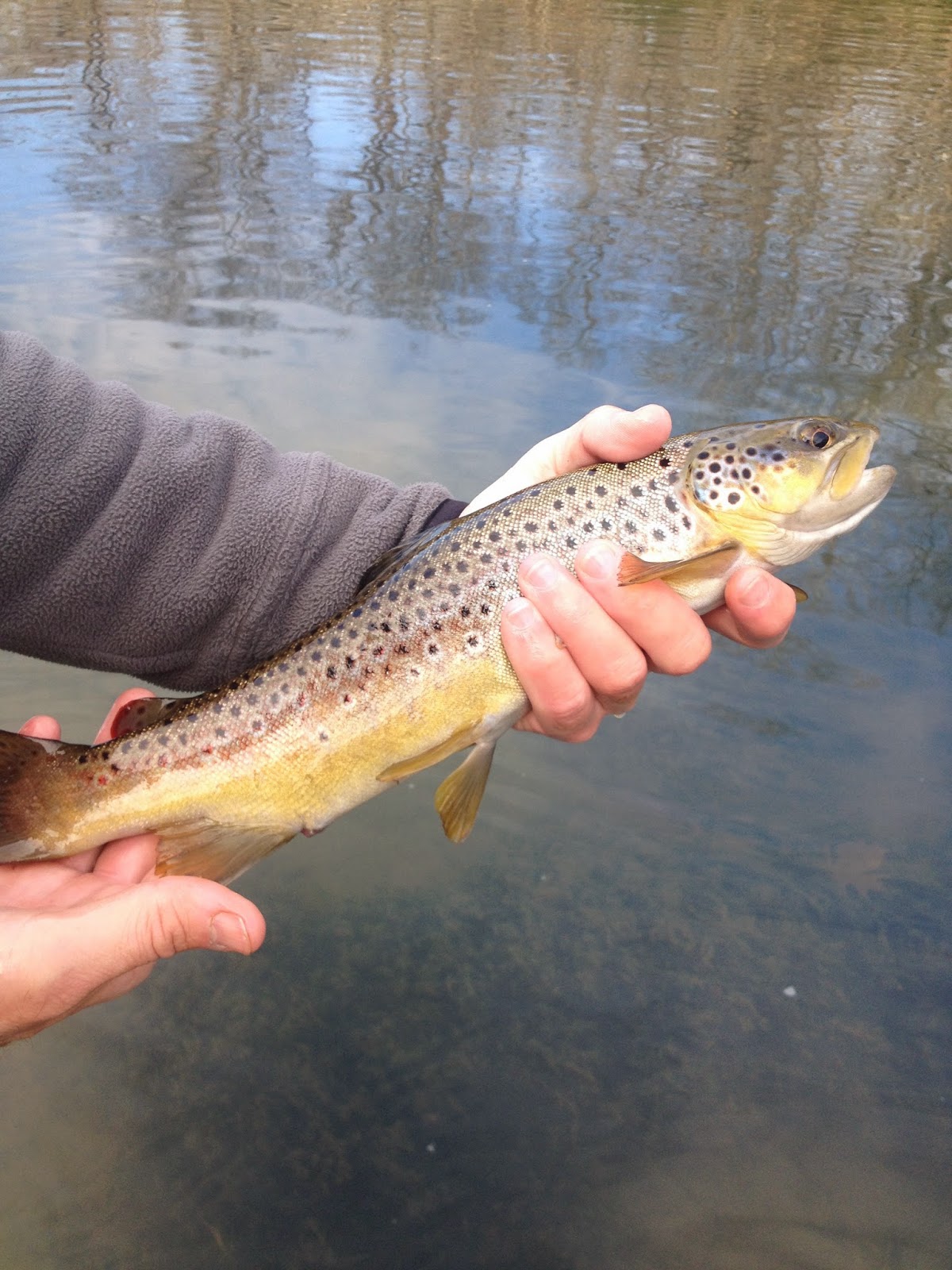 Having narrowly survived the mass of insanity on Saturday.  I was rewarded and cherished a great day of fishing on Sunday.  Nothing like the hustle and bustle of a congested city, to make you appreciate the quiet and solitude of nature. 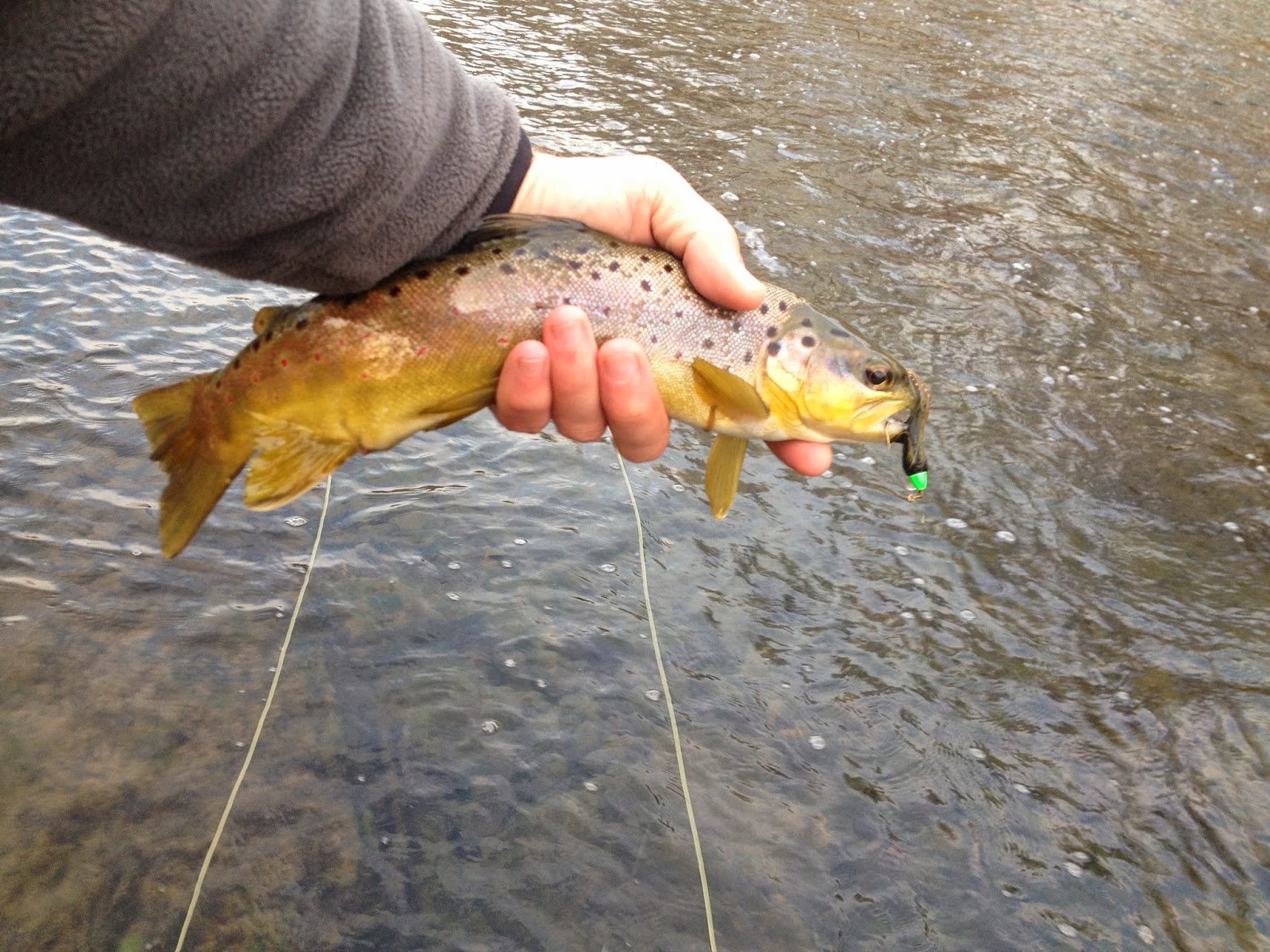 The plan was to meet my uncle at Libby walk-in at 5:45.  Load his kayak into my truck and drive up river and float back to Libby.  So that's what we did.  No issues on the shuttle.  Arrived and got started right on schedule.  I started catching fish right away.  I wasn't interested in nymphing so I tied on a small streamer and worked the deeper fallouts behind shoals. It wasn't fast but my first fish was a healthy brown of about 15"s.  Few casts later and had a fat bow in hand.  Caught several in that 1 spot.  After about 30 mins, we had a "guest" show up and he wanted to fish the same water.  No biggie, I was ready to try something new so I let him have it. 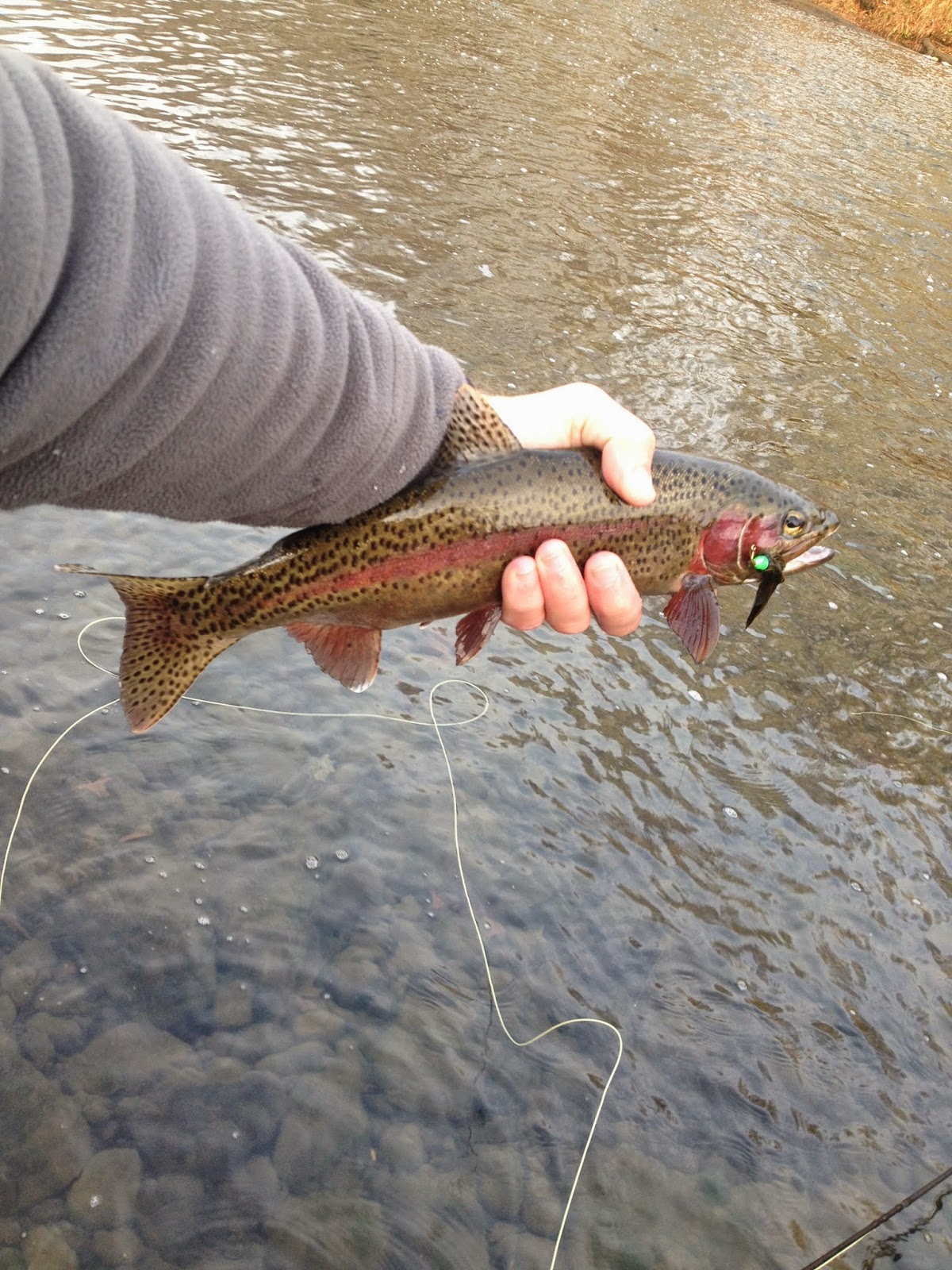 My uncle doesn't fish much so I checked in on him before we left.  He had gone to BP and spoke with someone who told him he needed 5x tippet material for his spinning reel...not a joke!  As you can imagine I felt terrible for him b/c he couldn't cast his spinning rod 10ft.  The good news is he saw how much fun the fly can be and decided to invest in a new beginner set-up.  I'm going to help him out...1st advice I gave him was, "avoid BP."  He still had a great time just being on the water. 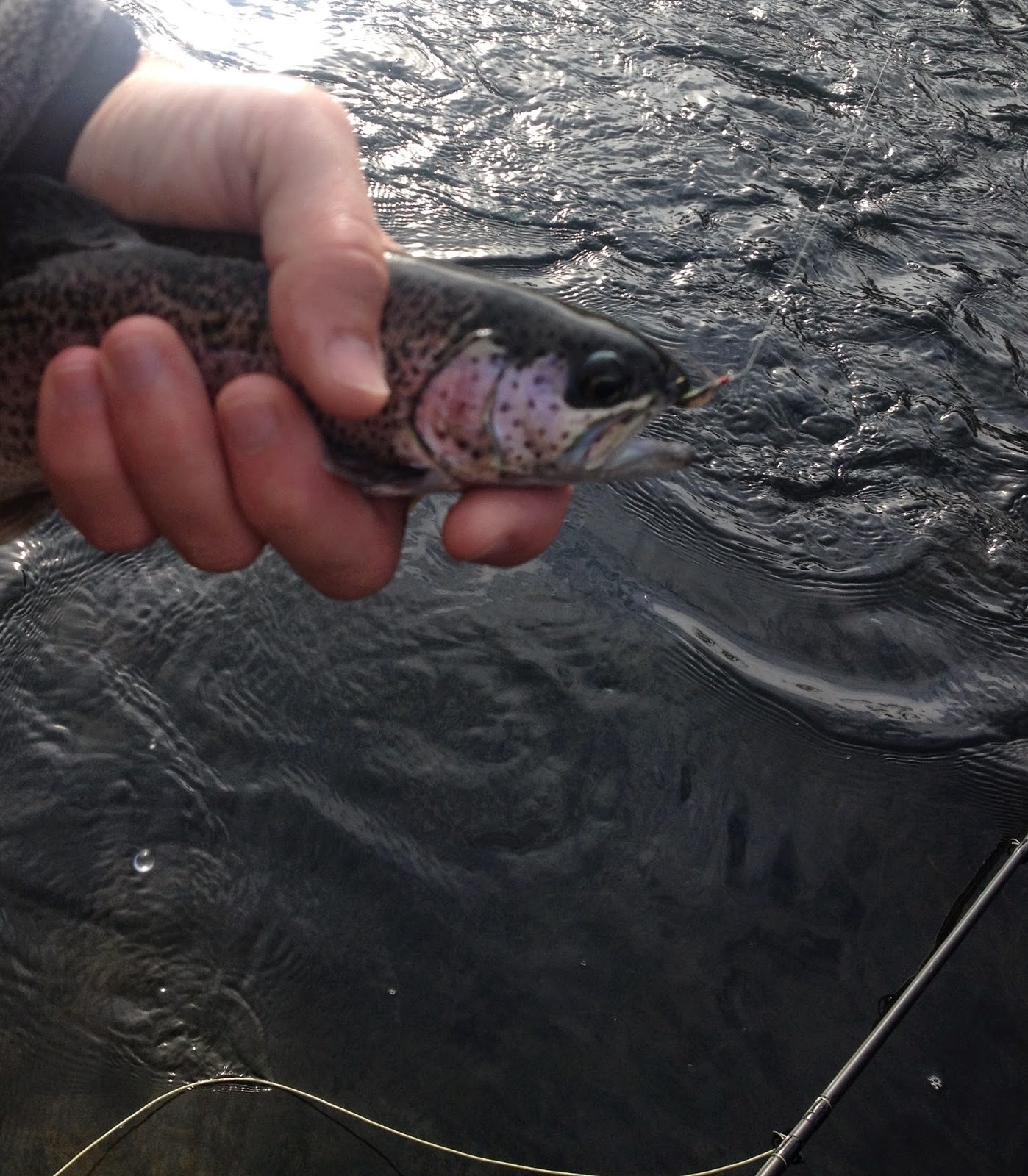 Back to the fishing.  Moved down a little and found a good spot with good water moving.  It was a min. flow day, so finding moving water and no other people on it was the key.  This location looked perfect for swinging soft hackles.  I went to work and brought several more bows and a small brown to hand.  Also, managed 3 that were about 4"s...the thought crossed my mind to let them struggle in the current and maybe enticing a large brown to feed (Not my idea, watched a Kelly Galloup video where he had a large brown lock on to a small bow and followed up by catching it on a streamer).  Decided against it for now but maybe next time!! 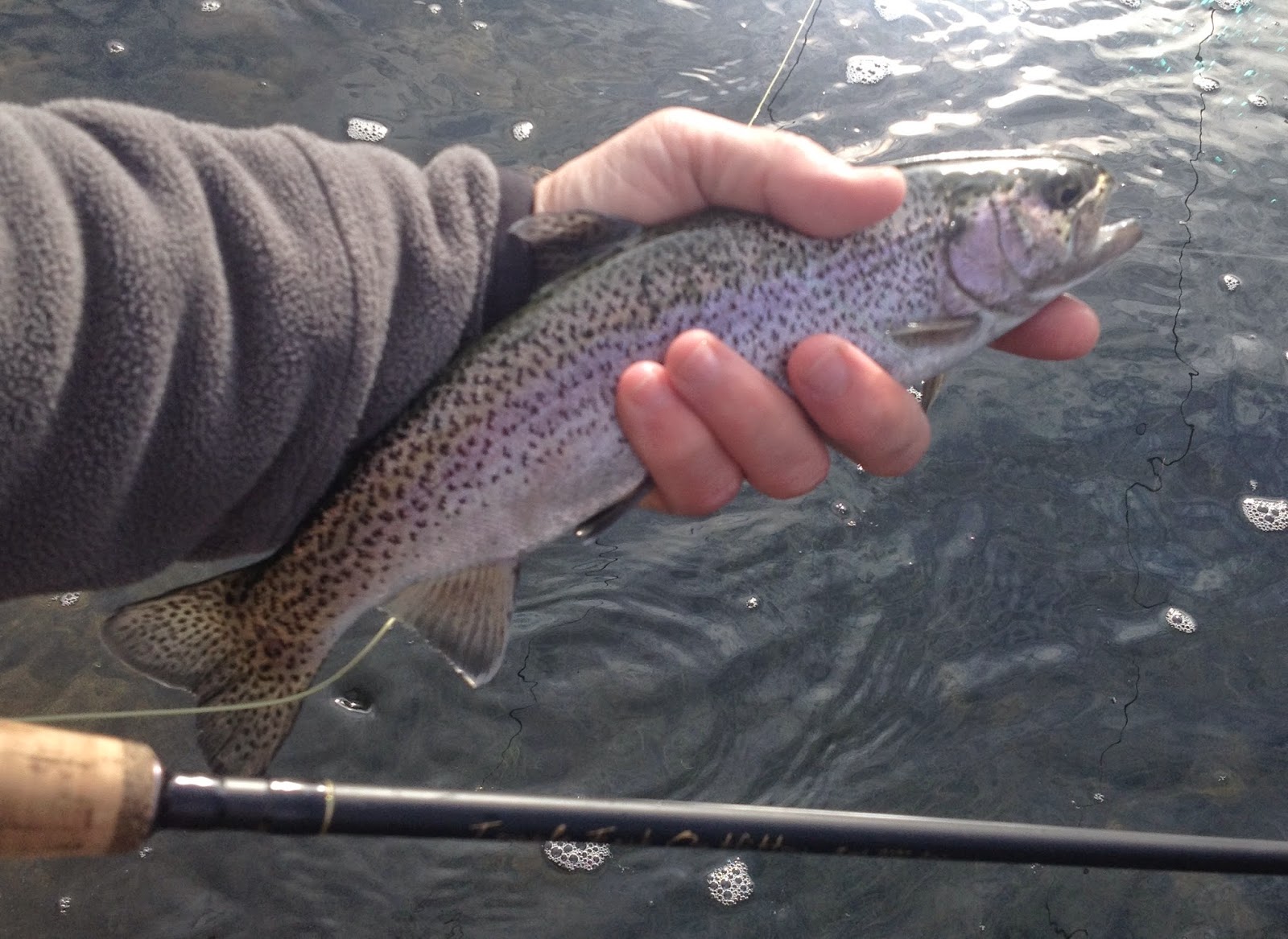 Saw a few fish rising in a fallout so I worked to them and landed a dozen more bows.  Must have gotten a homeowners attention b/c more "guests" descended on me.  3 guys emerged through the trees...but didn't encroach!  They kept their distance, until I broke off and had to walk to my kayak (upriver from them) to tie on a new soft hackle.  I watched as they nearly fell over themselves getting to my recently vacated location.  Lesson learned, get a sling and wear it when you leave the safety of your yak!!!  It's cool, my uncle had moved down river so I needed to catch up anyway. 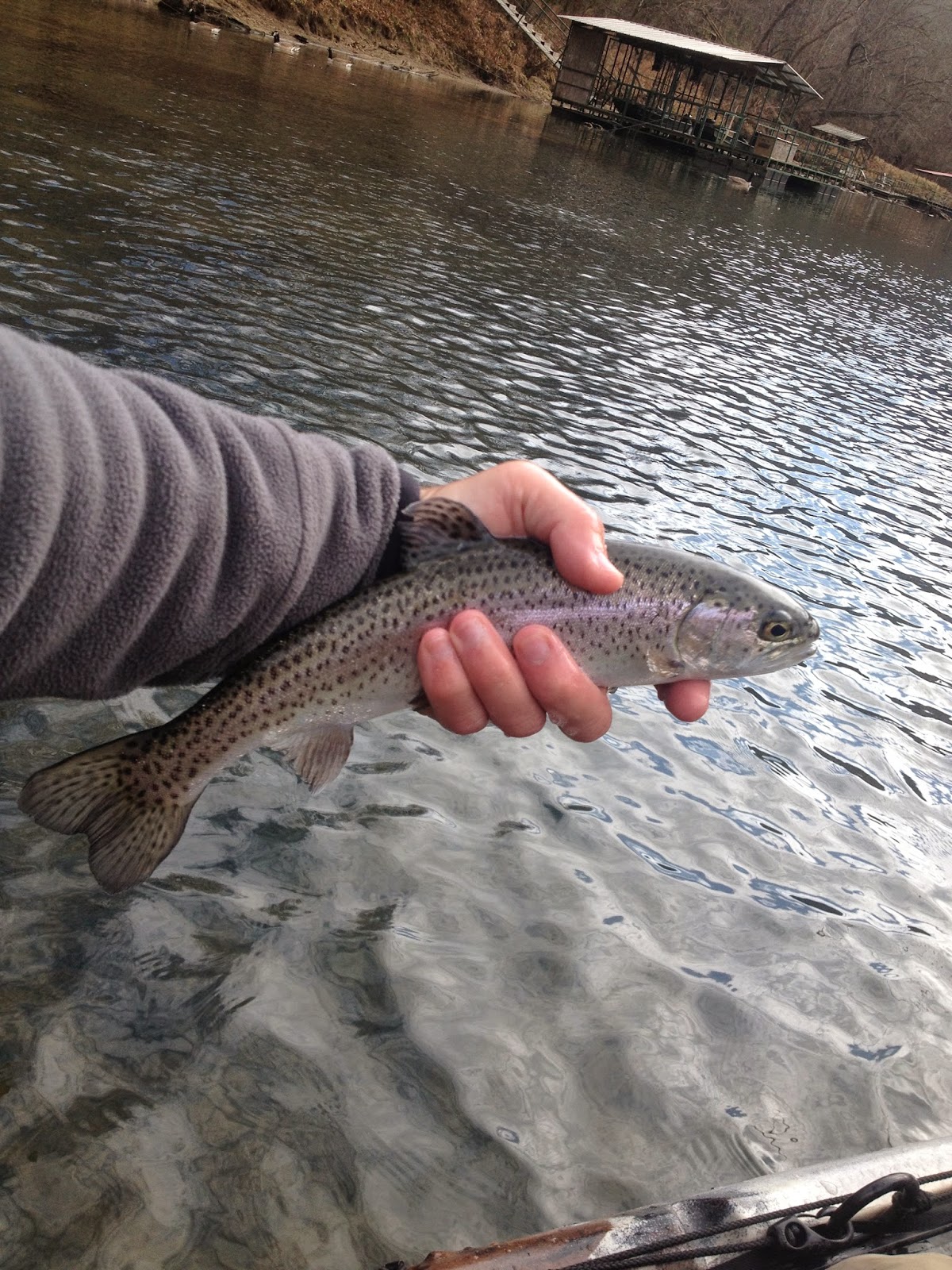 Found him and he say's, "man where did all these bugs come from."  Say what...yep, nice hatch on the river.  Parked the yak, tied on a midge, and caught several including the best brown of the day.  It put on a great show for us...jumping several times and making long runs.
The constant sight of rising fish was enough to get my uncle really interested in trying the fly rod.  I gave him a short lesson and pointed out a few fish...he had a few takes which was very exciting for him but was slow on the set...understandable since I hadn't explained that part.

It was around lunch time and it had been a great day.  So we decided to wrap up the day and head for the vehicles.  I couldn't resist a few fishy look'n spots and was able to catch a few more...but also penalized for not following the rules of the paddle out.  My last presentation to a fish was flagged with nice big birds nest.  I could have probably taken a few minutes to work out the knot...but knew I wasn't playing fair so I cut the fly off and put the TFO away. 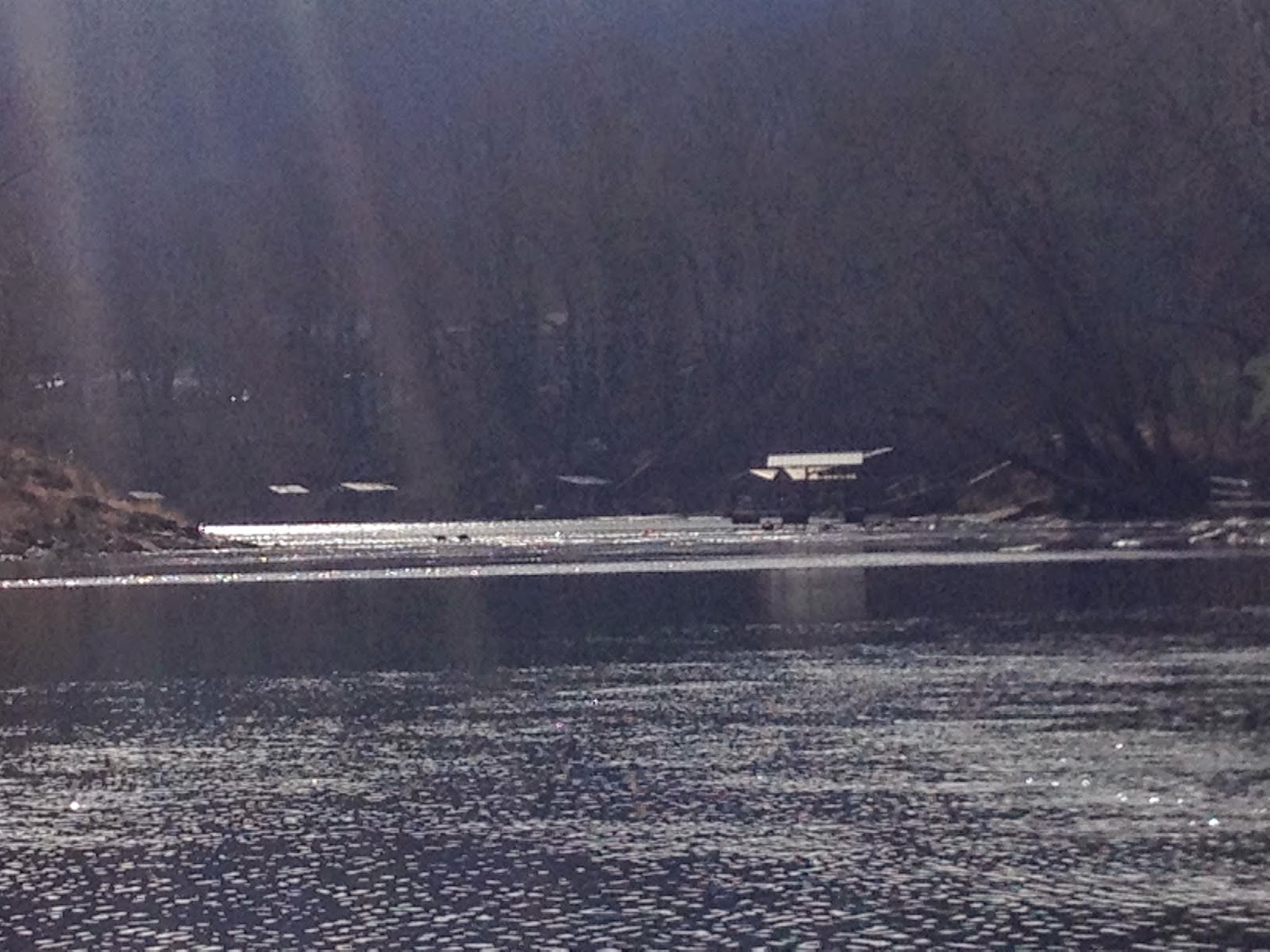 I know my wife is going to ask me to help wrap gifts.  I already figured out my response, "Sure, I'll go get the bows."  I might survive this holiday season.
Posted by looknfishy at 11:33 AM