The final fishing write up for the trip.  If Tuesday was a great day, then Wednesday was greater'r or something like that!  The night was much more peaceful, as I planned/expected, awake at 3 am ready to fish.  However I had to break camp 1st since I had to drive home later.  My plan was the park along the road heading out of GI and fish until about 2 pm.  With coffee running through my veins, I was on the road at 5 am, passing through all the 25 mph zones when you have red fever is pure evil.  Bang'n my head on the dash as I crept through an empty town...not a sole in sight...waterboarding GI style, fun stuff!!! 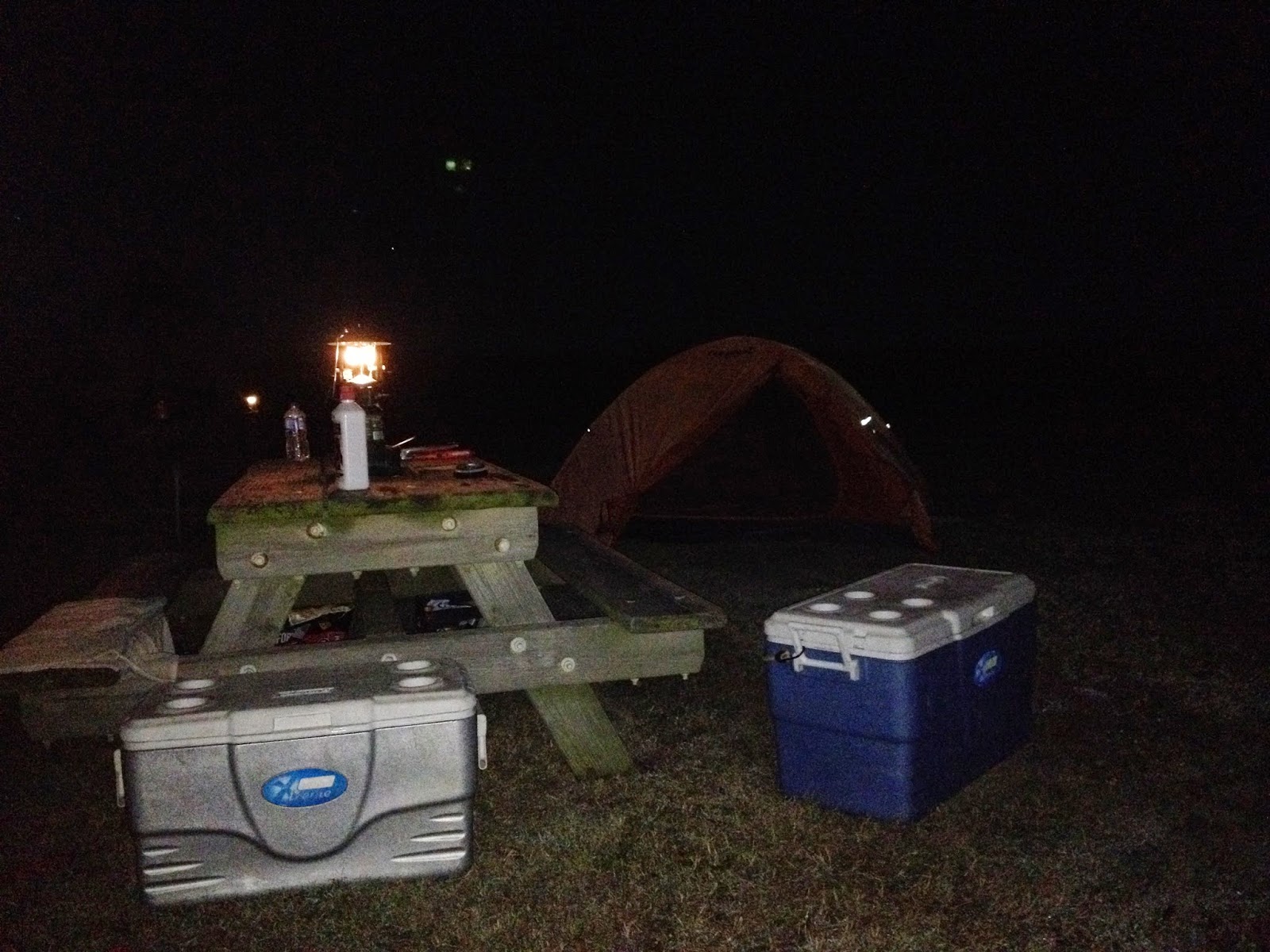 I knew today was going to be different for me.  The winds were expected to be much higher, 10-15 mph so I wasn't expecting to do much sight fishing.  Plus, I was wanting to try my luck at specks...I know nothing about catching specks...probably caught 10 total in all my trips.  But I was going to give it a fair chance today.  As the sun was come'n up I was walk'n the dog at every every fishylook'n spot.  That lasted, umm...about 25 mins b/c I could hear reds all around me...I also have no patience for doing something I'm not good at.  So much for a fair shake. 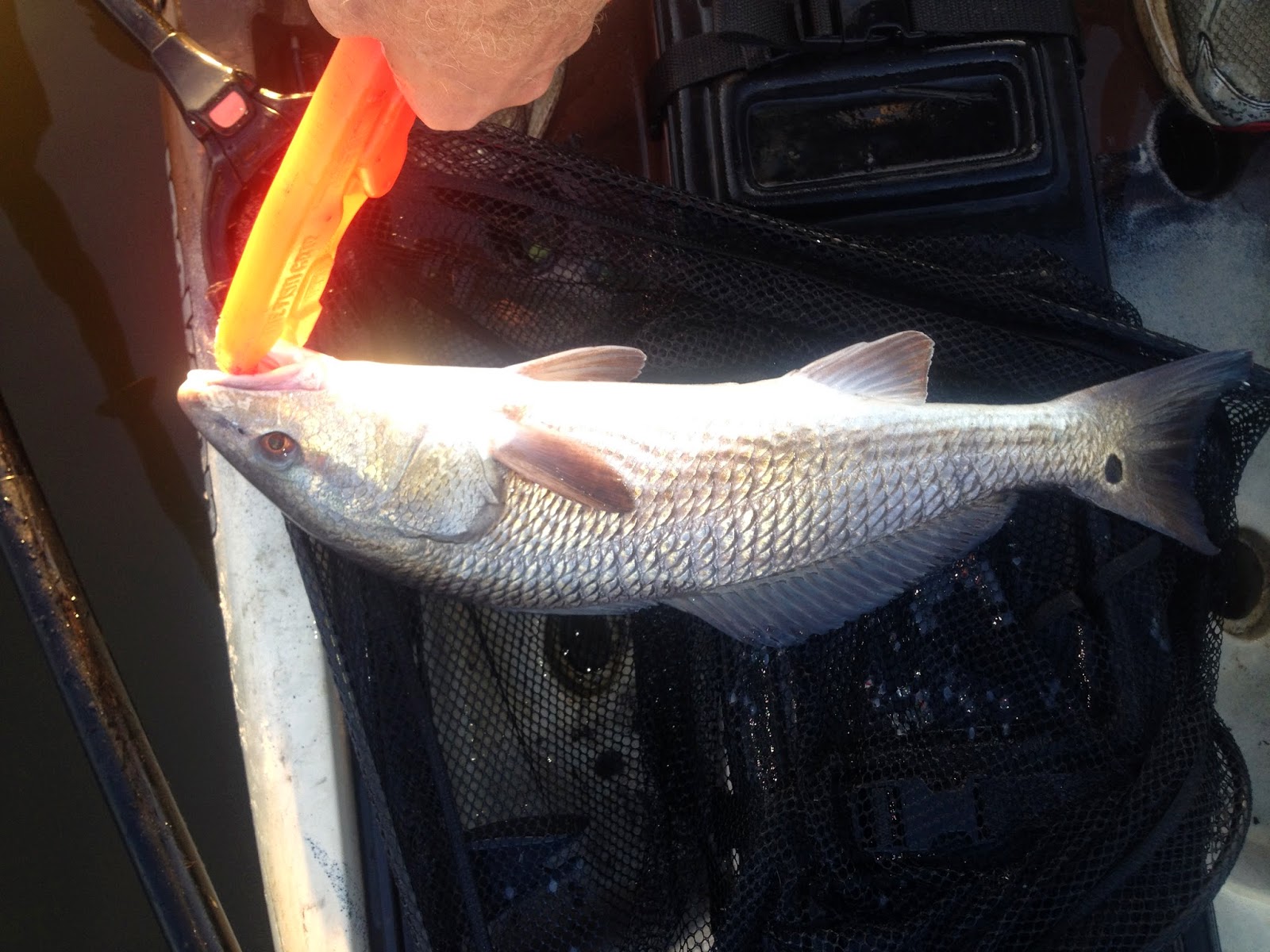 Away the topwater went and on the search I went, look'n for reds.  Just after 7 am I found a red crashing bait.  I slowly crept up on him and put the spoon in a good spot.  He turned and crushed it. 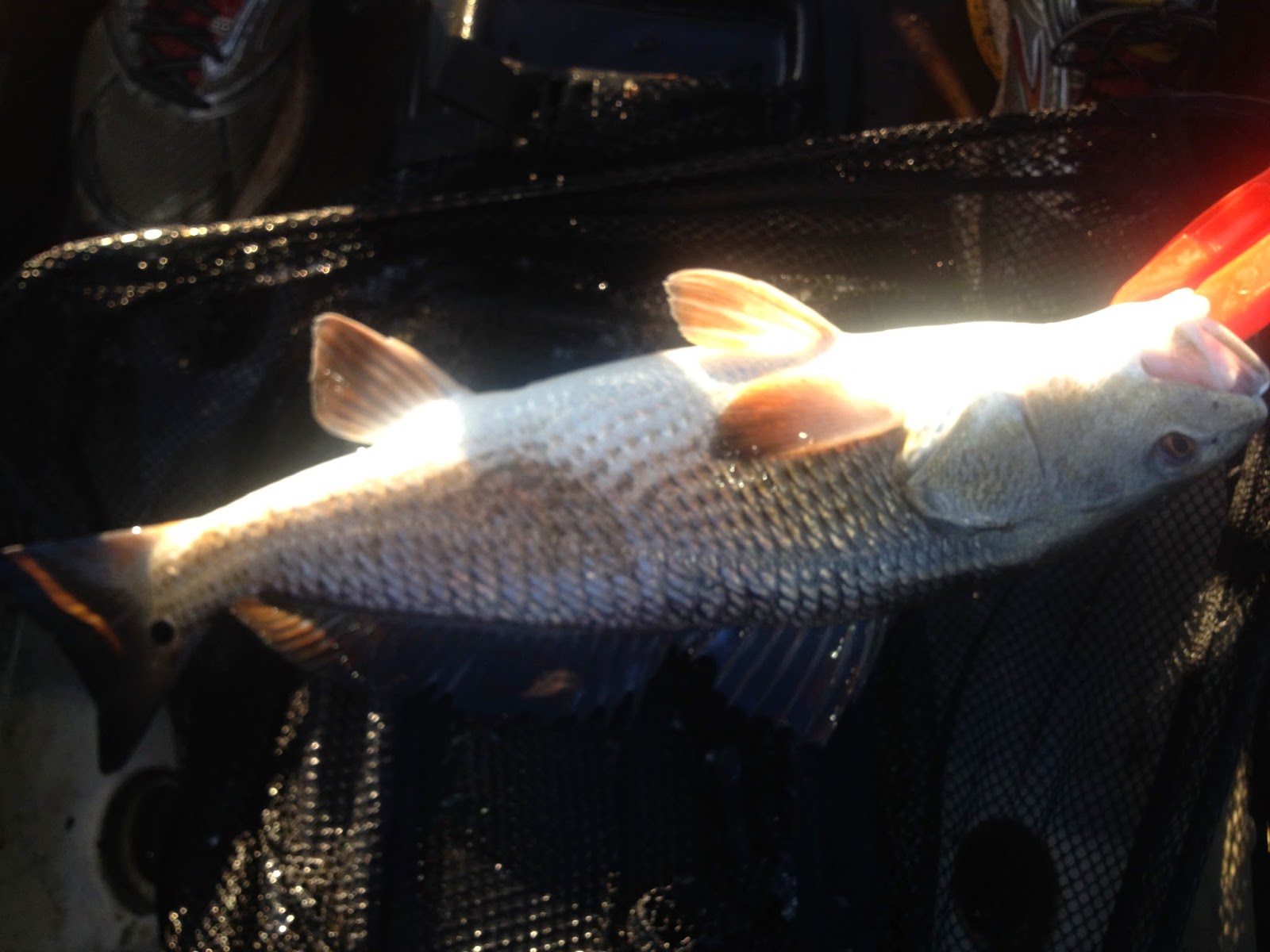 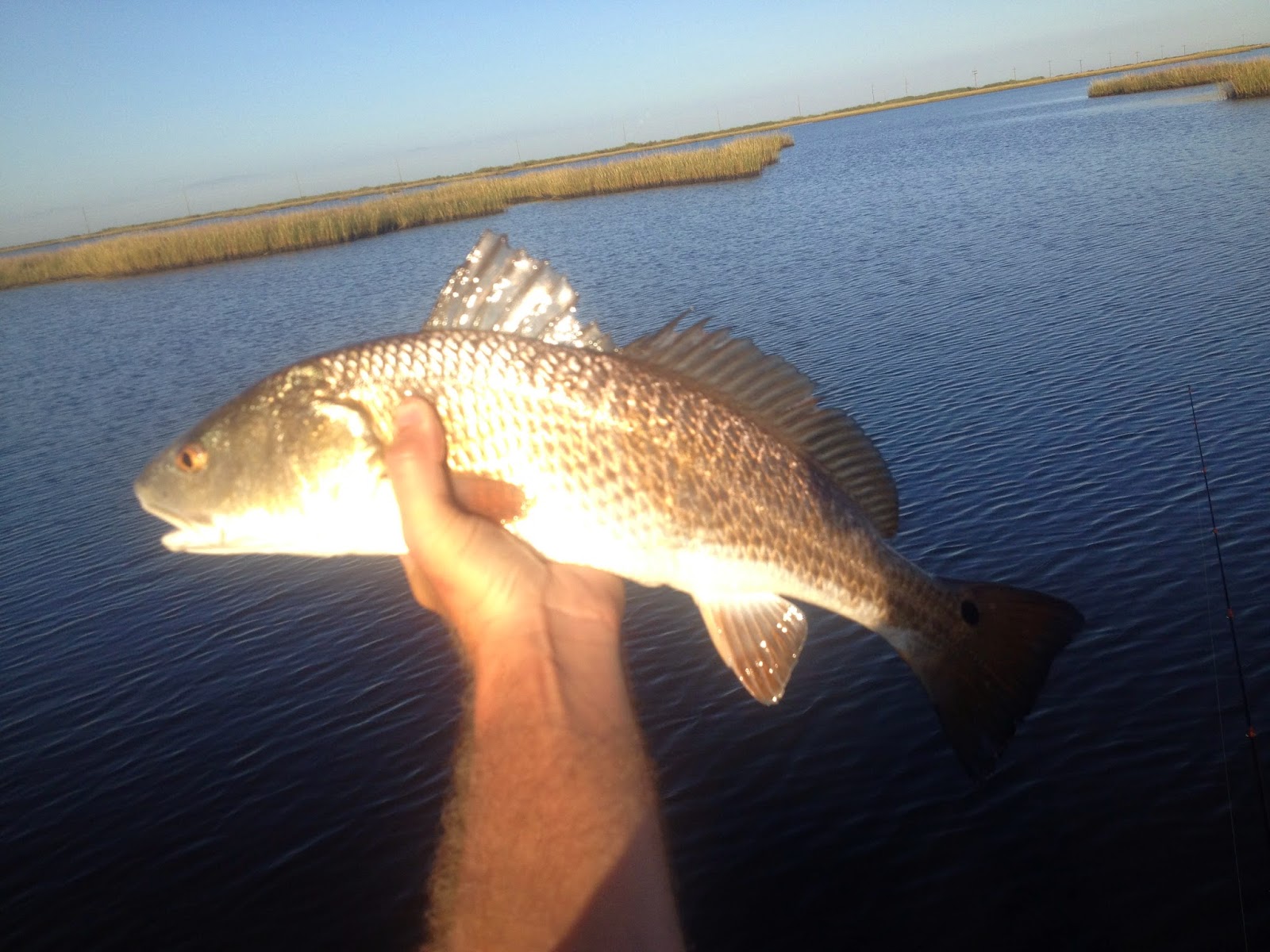 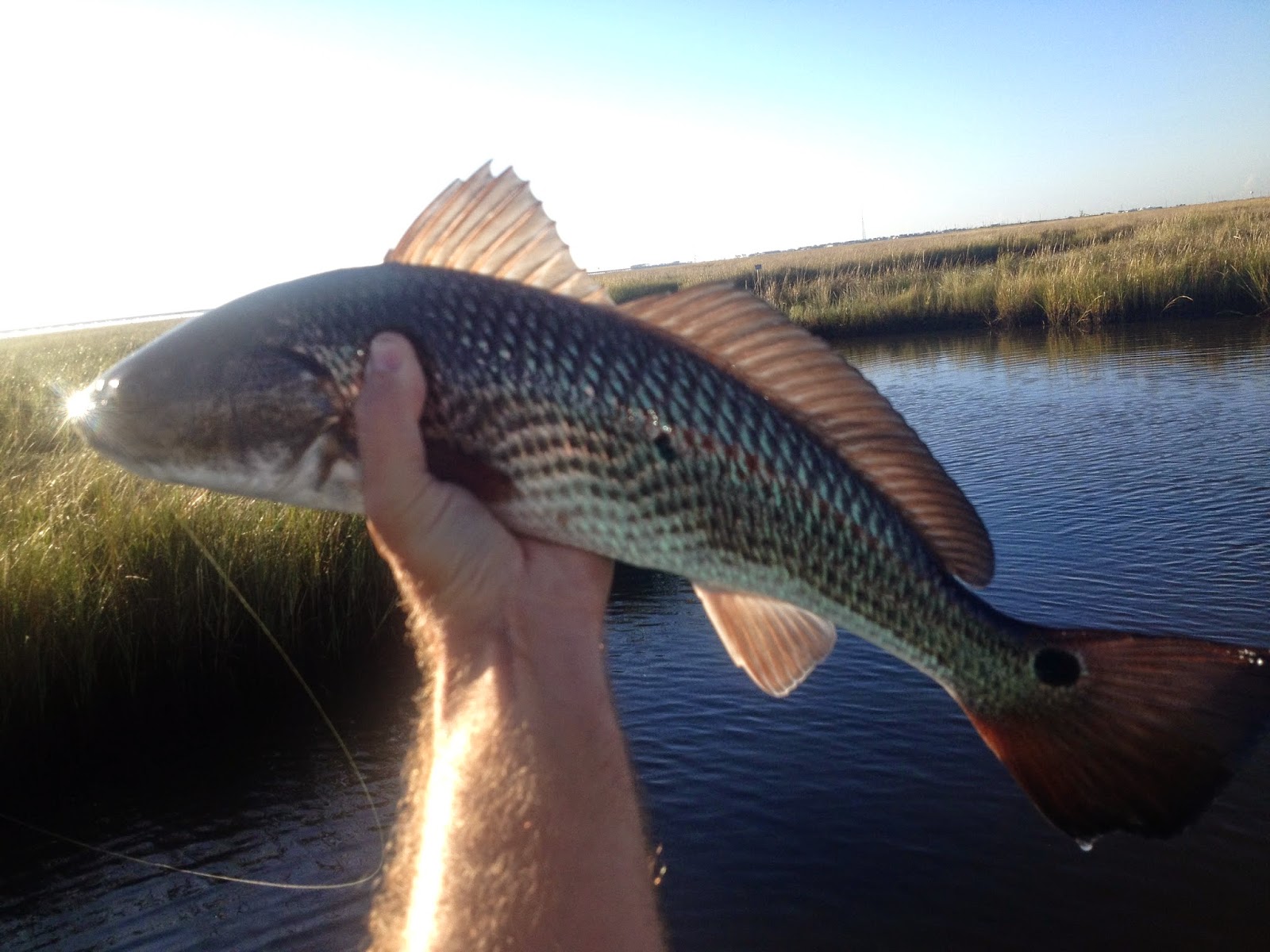 Between 7:20 and 8am I stalked and caught 4 reds and 1 drum.  The drum was tailing, I thought it was a red, sun in my face, I put the spoon over a reed and jig'd it a few times in front of him then he smashed it.  My 1st drum. 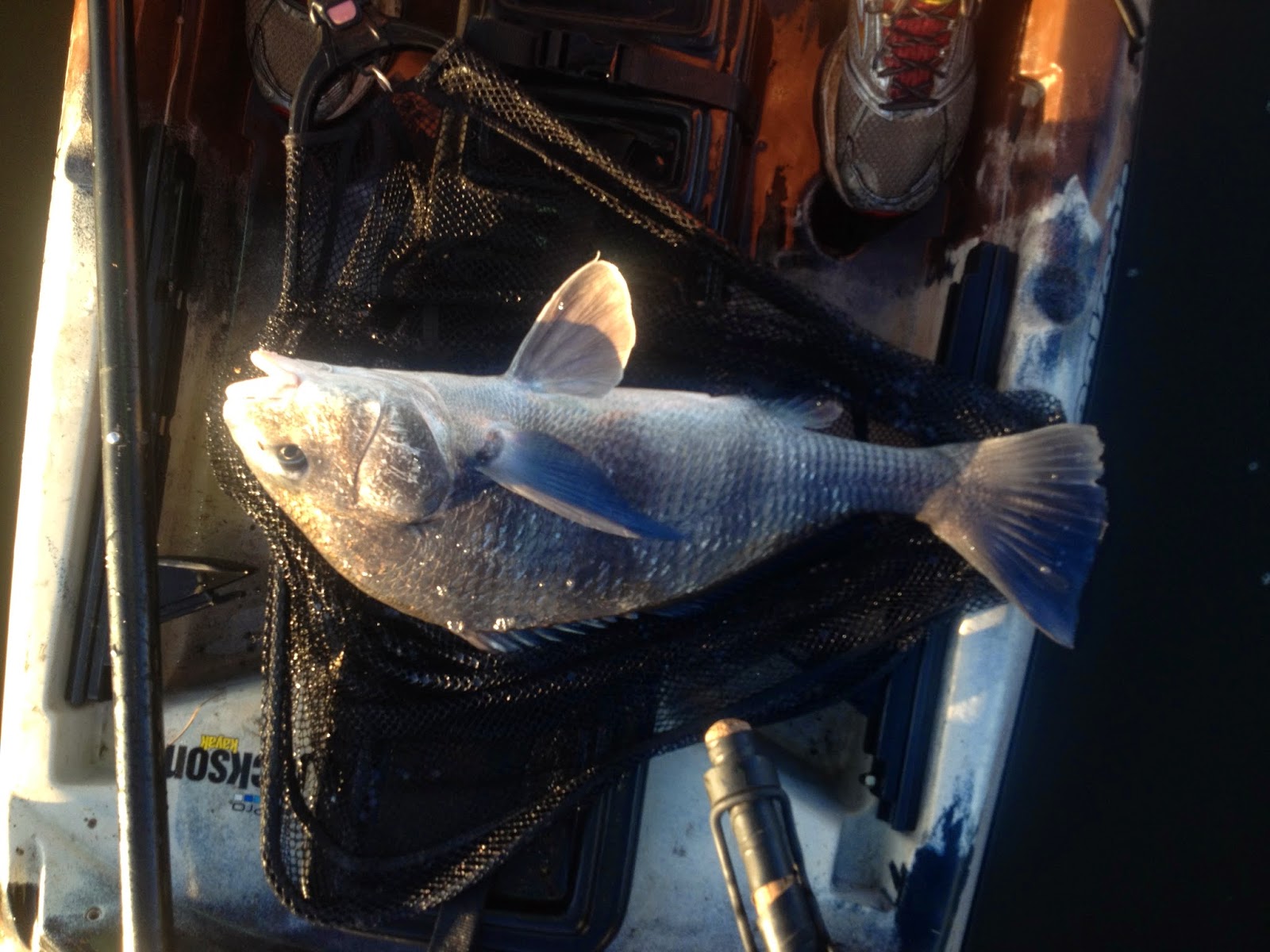 At this point I was following a canal and it ended at a "T".  As I was push polling along, I had to reach deeper and deeper to make contact with the bottom.  I thought, if I'm going to catch a speck this has got to be the spot.  The flat fell from  2 fow to over 5 fow and I suspected 7+ in the middle.  I picked up the speck rig with a TTF killer flats minnow (purple/chartreuse tail) and made a cast along the drop. 1st cast nothing.  2nd cast a little further out from the drop - NOTHING.  I hate specks...I suck at this!!  3rd cast on to the flat and work it down the drop...HARD THUMP, I set the hook and immediately whatever is on the other end peels 30 yds of line from my reel, NOT A SPECK!!  I reel, nothing happens...it runs again..another 20 yds off the reel.  At this point, I'm expecting to be spooled...so I start paddling to catch up...get the momentum going and let him pull me, drop the rudder and start the high speed pursuit.  We do this dance 6-7 times, I gain line, he takes it back.  Then he turns and goes back the other direction.  I haven't gotten within 20 yds of the fish or sea monster.  I can tell he's getting tired so I put some pressure on him and get him close to me...then I see the tail and it's got a big spot.  BIG RED!!!  Now I'm regretting that trout knot (perfection loop knots) I used to attach 14lb mono leader to braid....14 inch rainbows don't test knot strength like this...and I wasn't expecting a bull red.  We've gone a good 100 yds and I can tell he's almost ready...I try to net him...he looks at me like, "nice one loser."  Toss the net and grab the lip grips...attempt 1-fail, attempt 2-fail, c'mon man!!  Finally I get the grip's attached and pull him into the cuda.  My biggest bull red, 38 inch's. 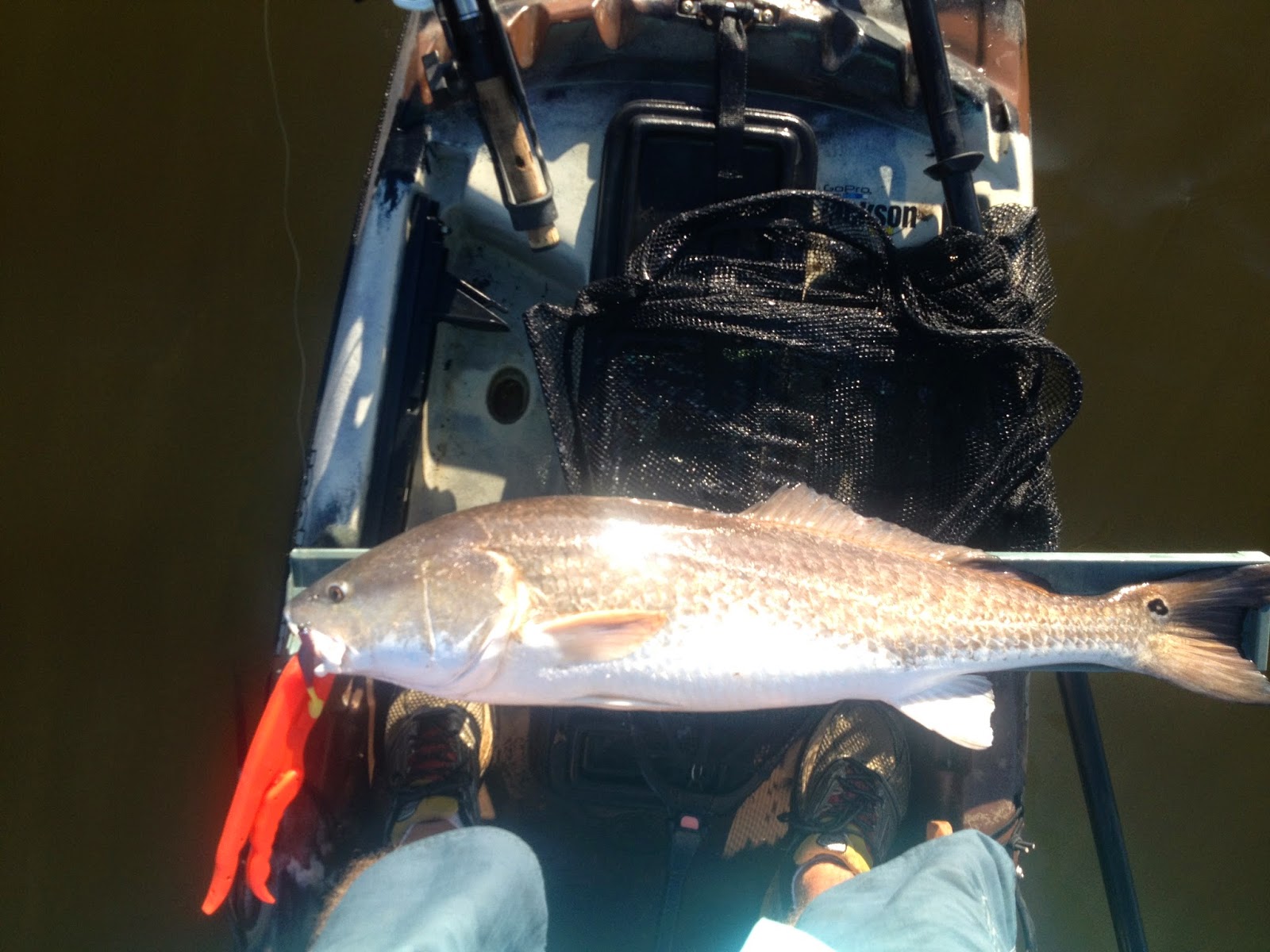 I spent 5 min holding his tail refreshing him and when he was strong enough, he pulled free and swam away.  Think I was addicted before...I get chills writing this!!!  Afterwards, I just set there and thought about how lucky I was...to be able to fish, travel to awesome locations, able to land a fish on an untested knot, and using the wrong gear!!!  I'm very fortunate.  As I was letting the burn ease from my forearms I noticed a porpoise going crazy 25 yds away.  All I could think was, I sure hope he doesn't have that red cornered. 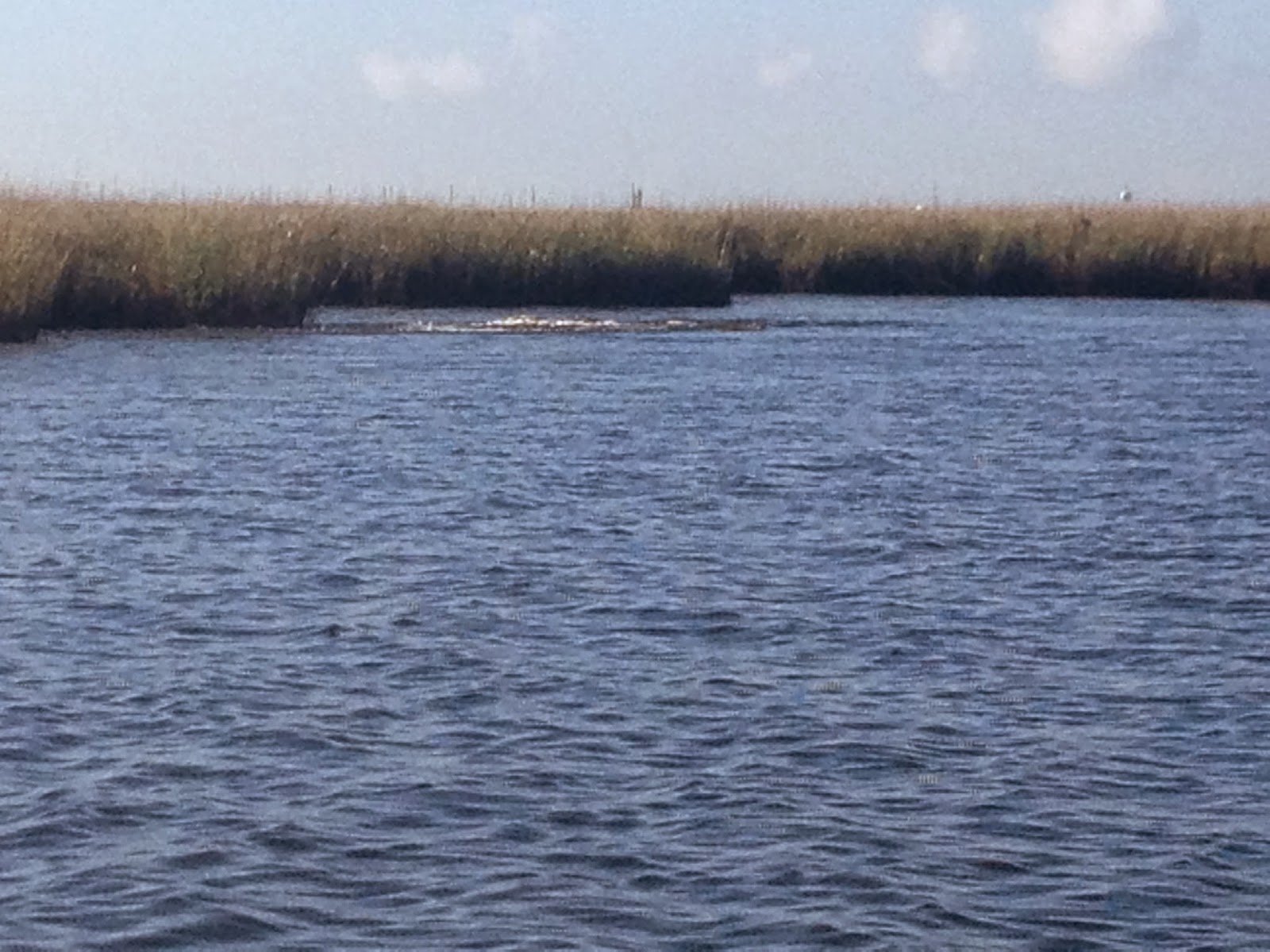 After I recovered, I felt like I needed to hit that big hole again.  Drifted down it and set up.  No more messing around, I cast right to the middle...not expecting much of anything to be left after the fight that just occurred in the middle of the dance floor.  I was wrong...no clue with trout.  1st cast and fish on. 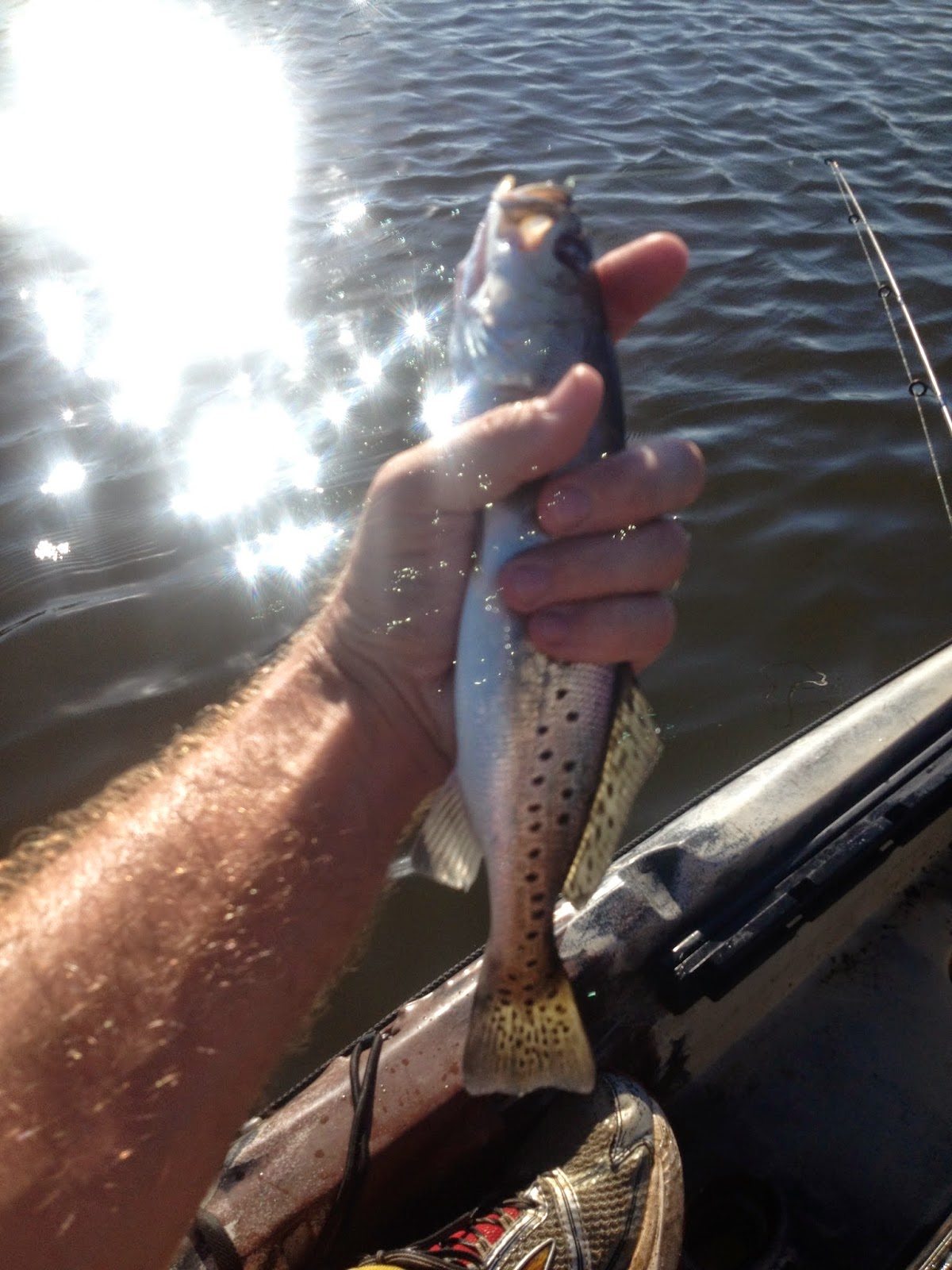 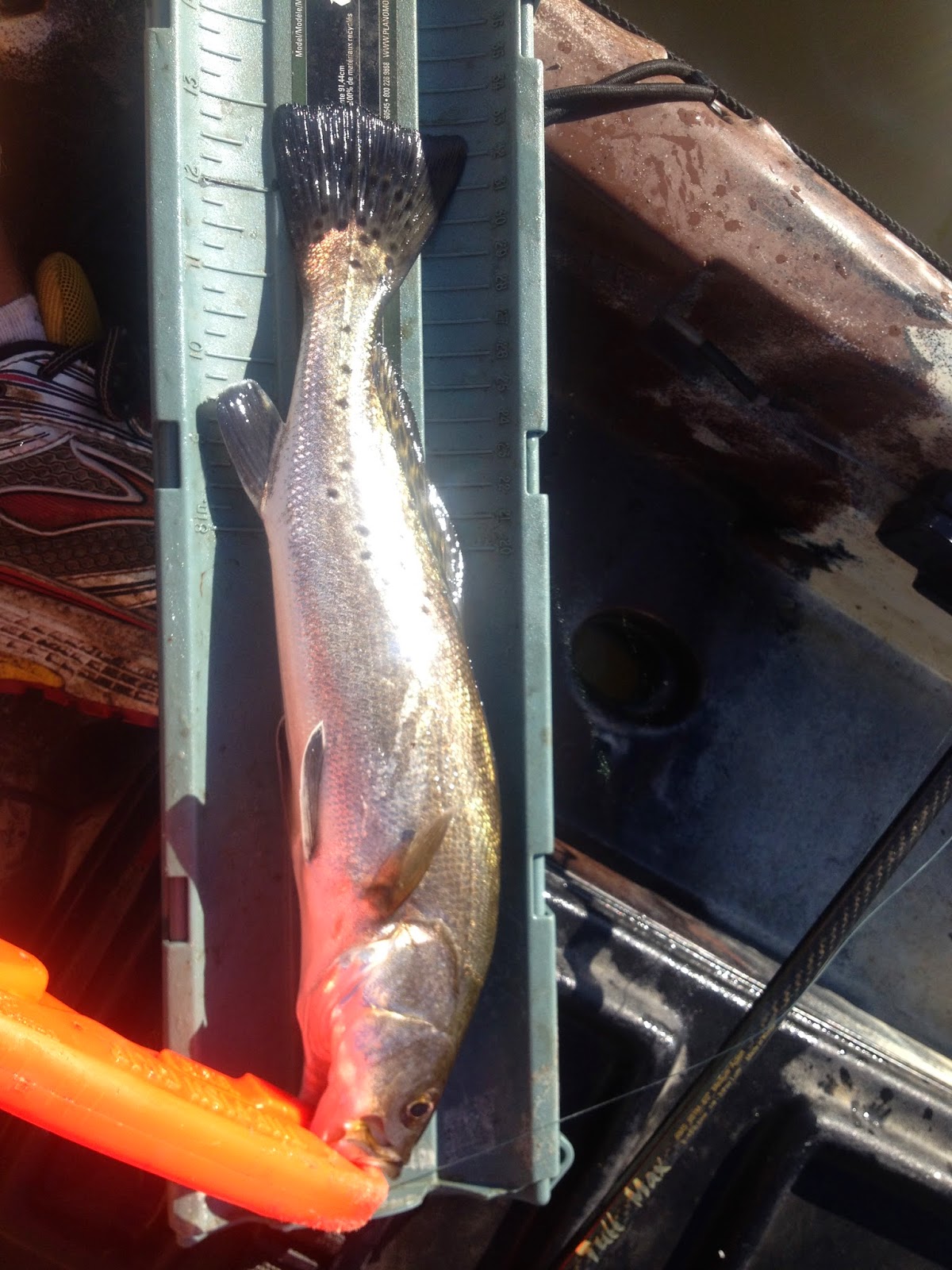 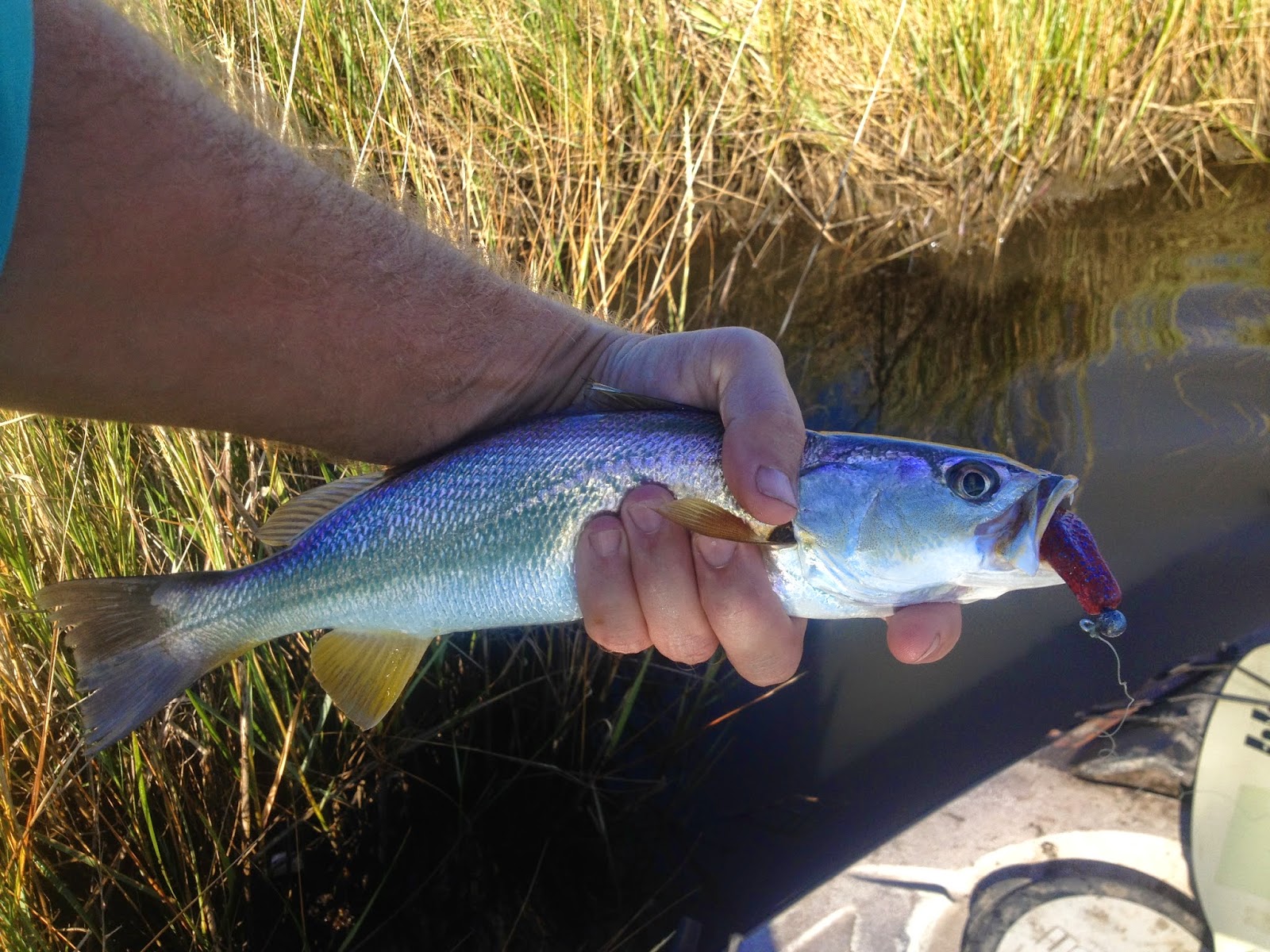 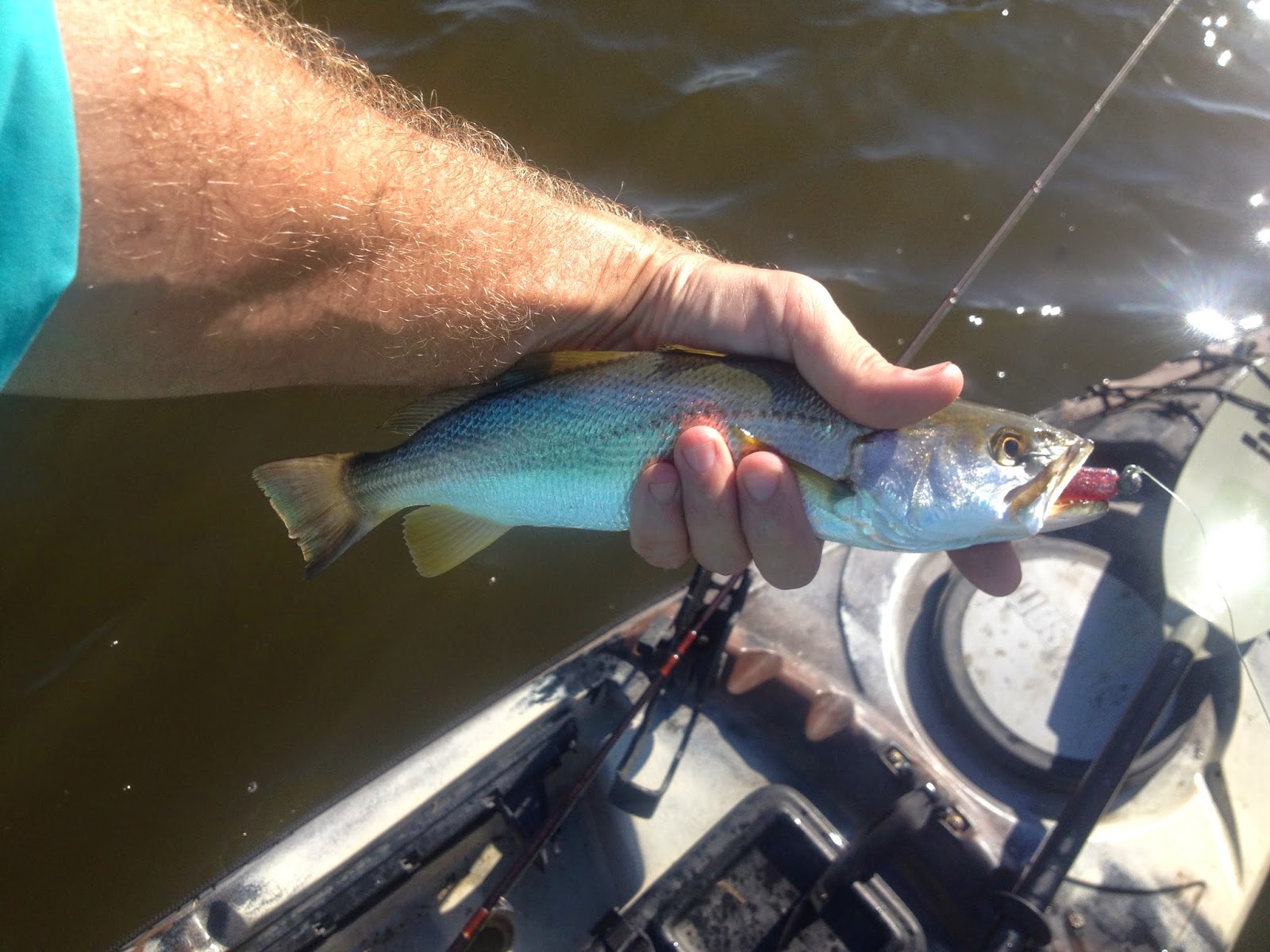 And it went like this for about 20 trout, white and specks.  Not much size to them.  Only half were keepers...not that I had any way to keep them.  Fish brain struck and I left my fish bag at home.  I wasn't going to keep reds...but I would have kept trout...I don't have any!  That hole dried up and an idea struck me in the face...a cajun slam...need a flounder...never even seen one...you can do it?!  Long story short..spent an hour do'n something...not sure what, b/c all I caught were these. 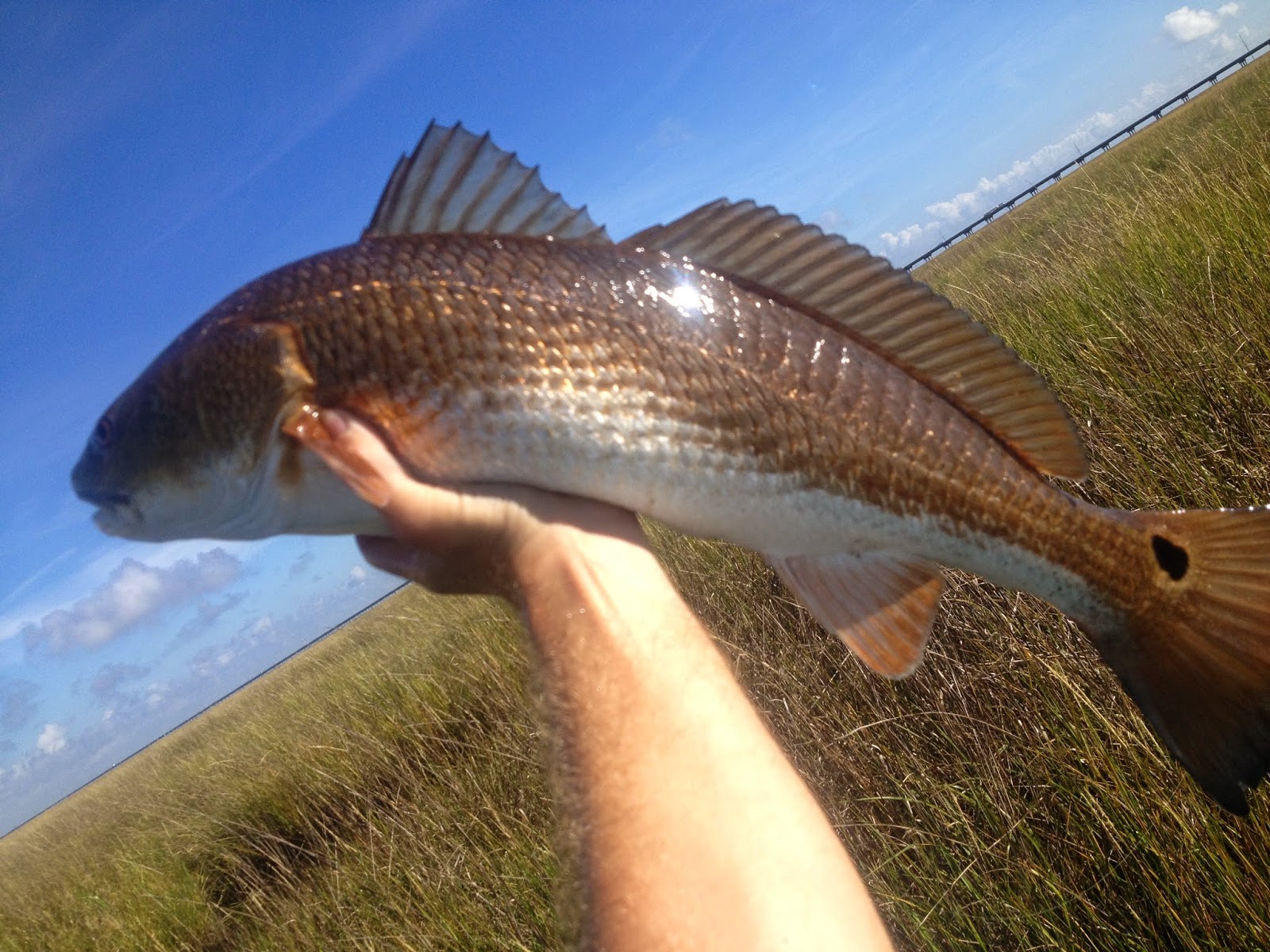 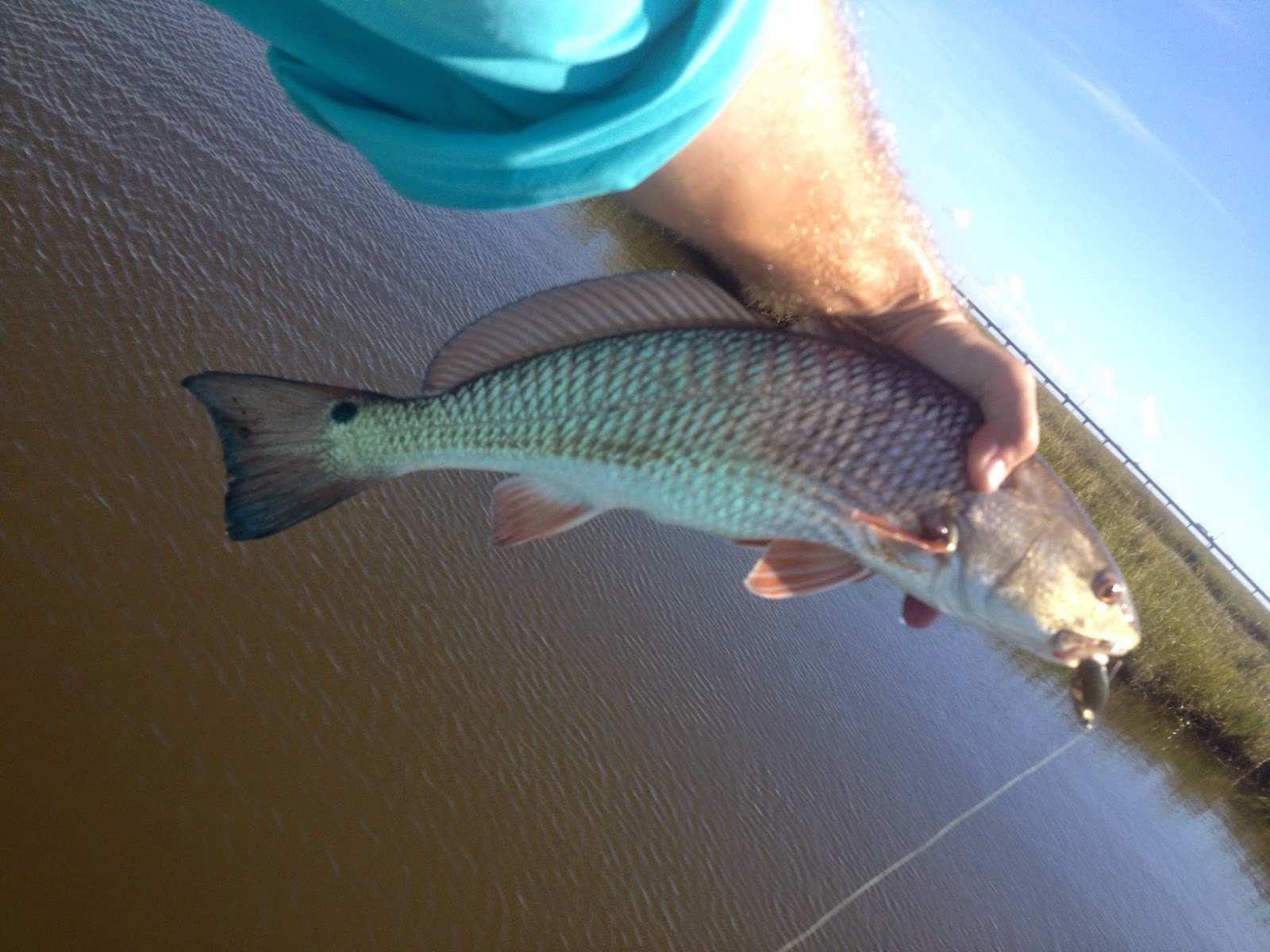 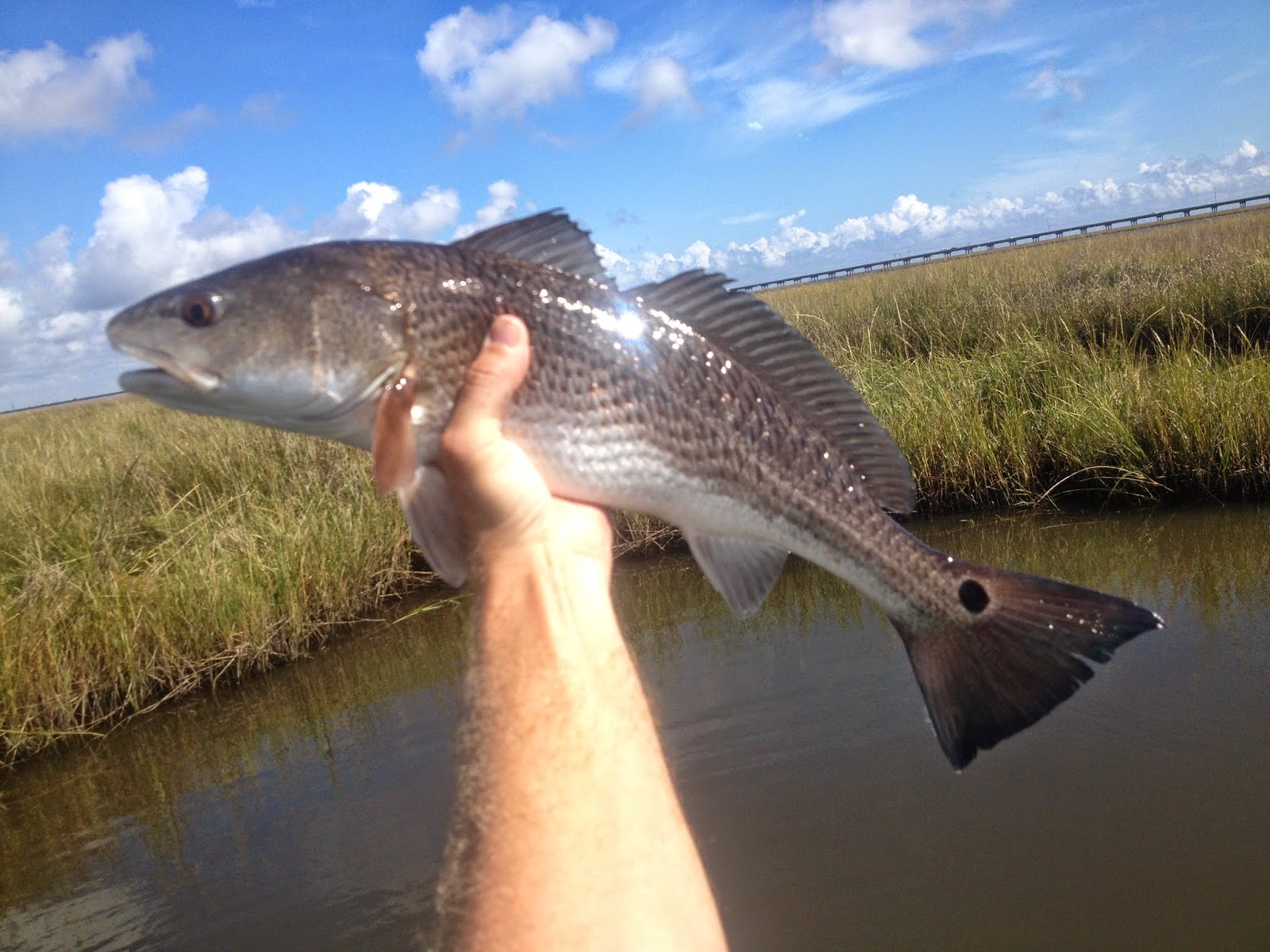 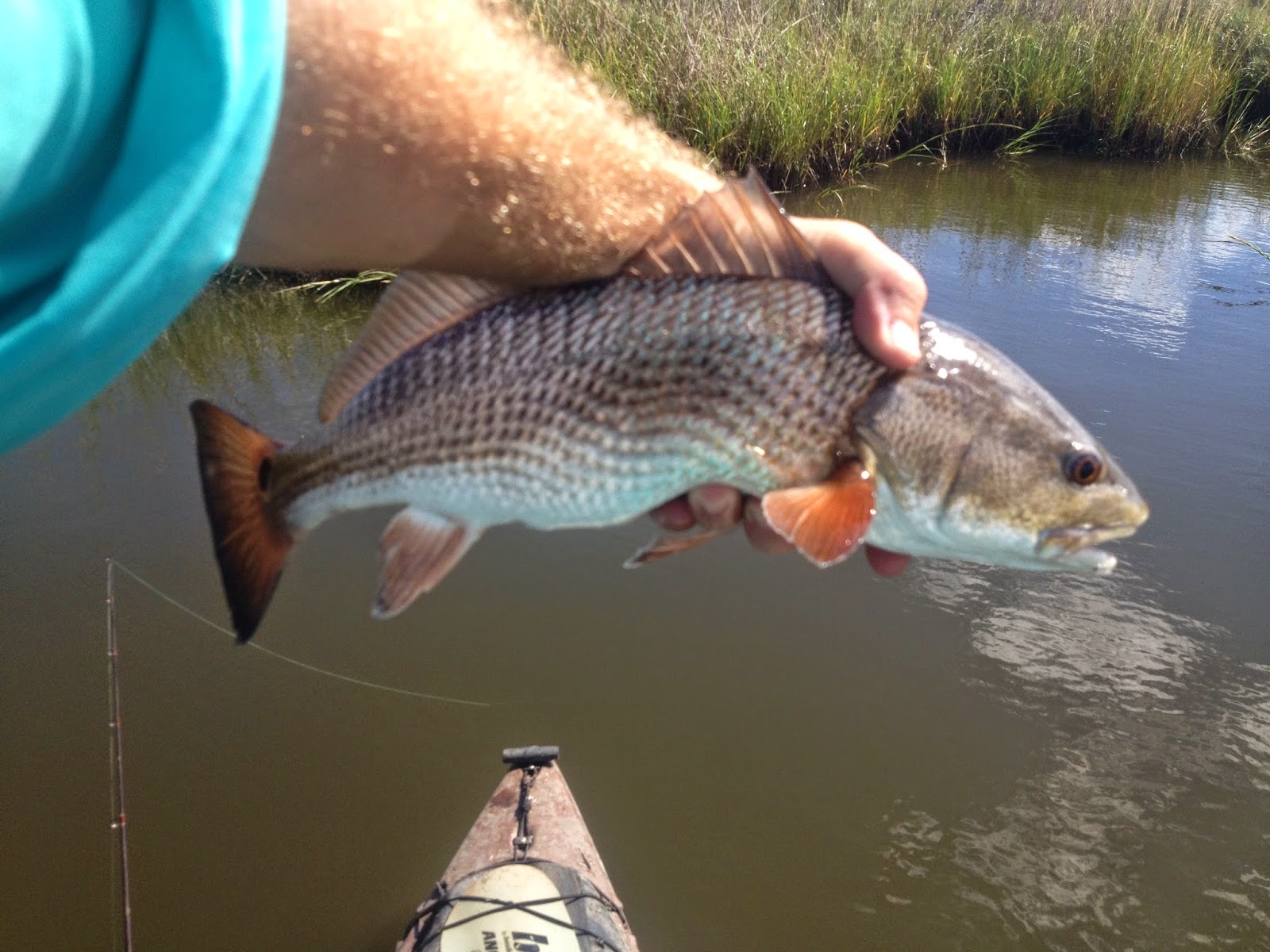 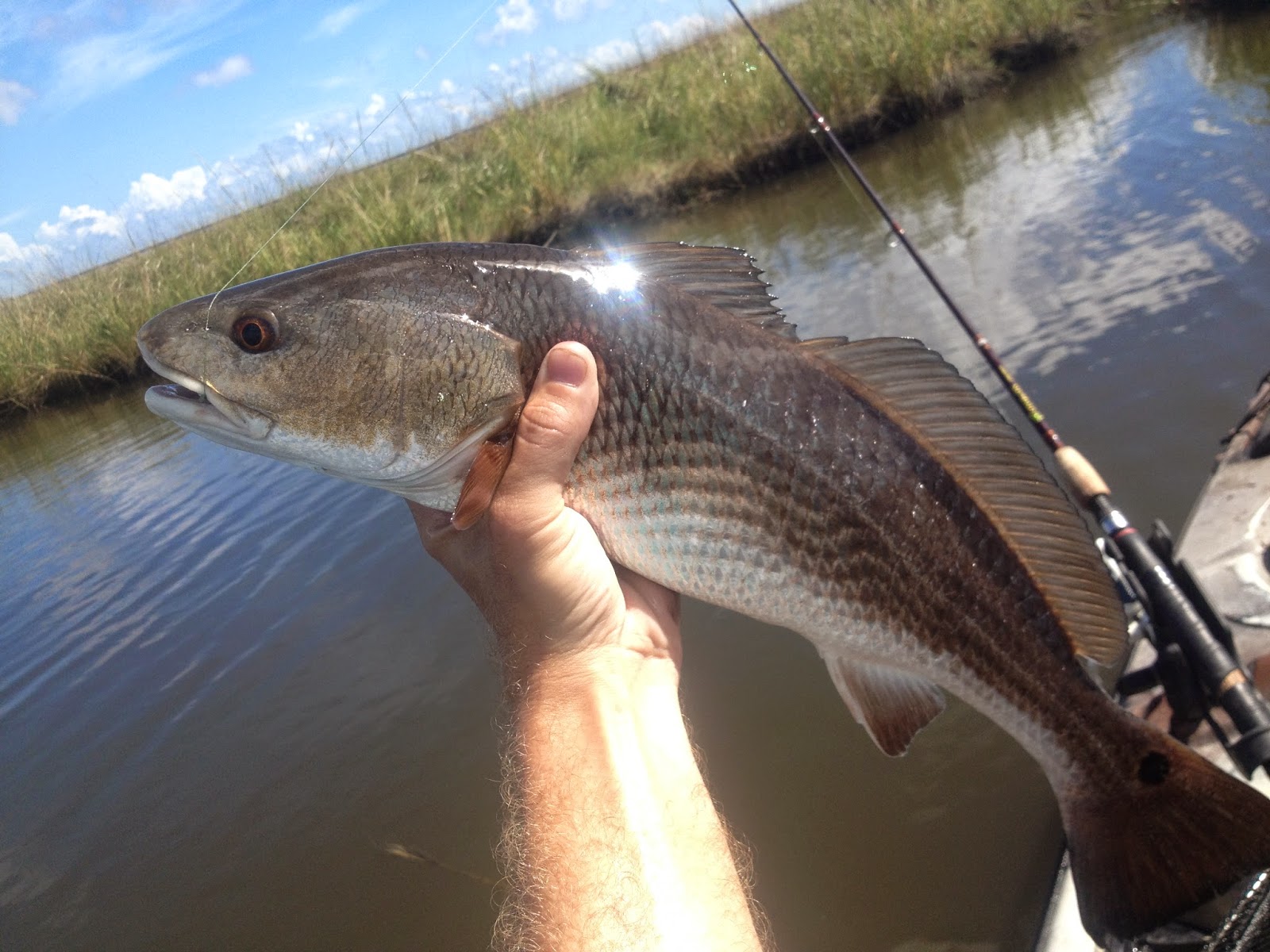 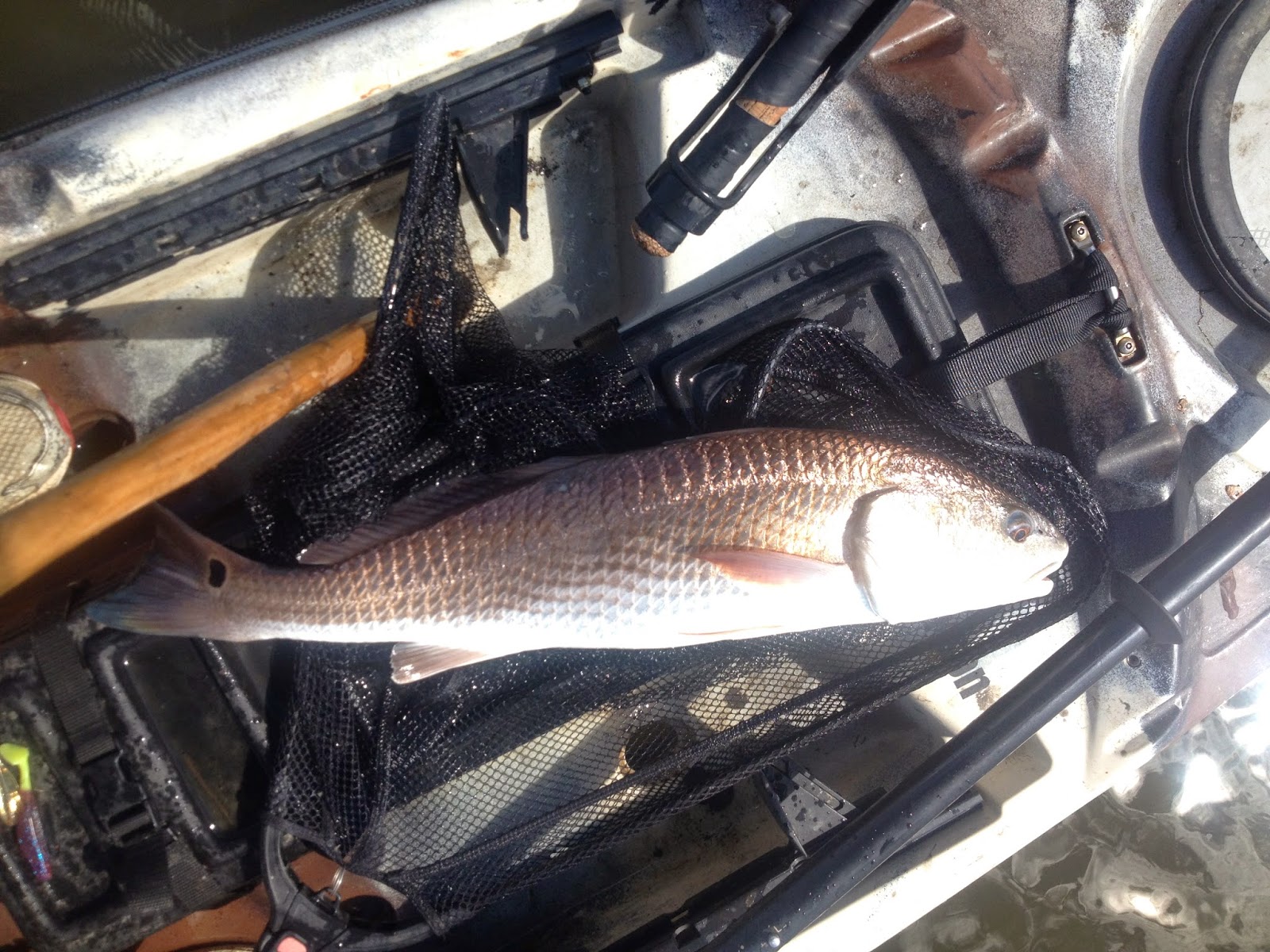 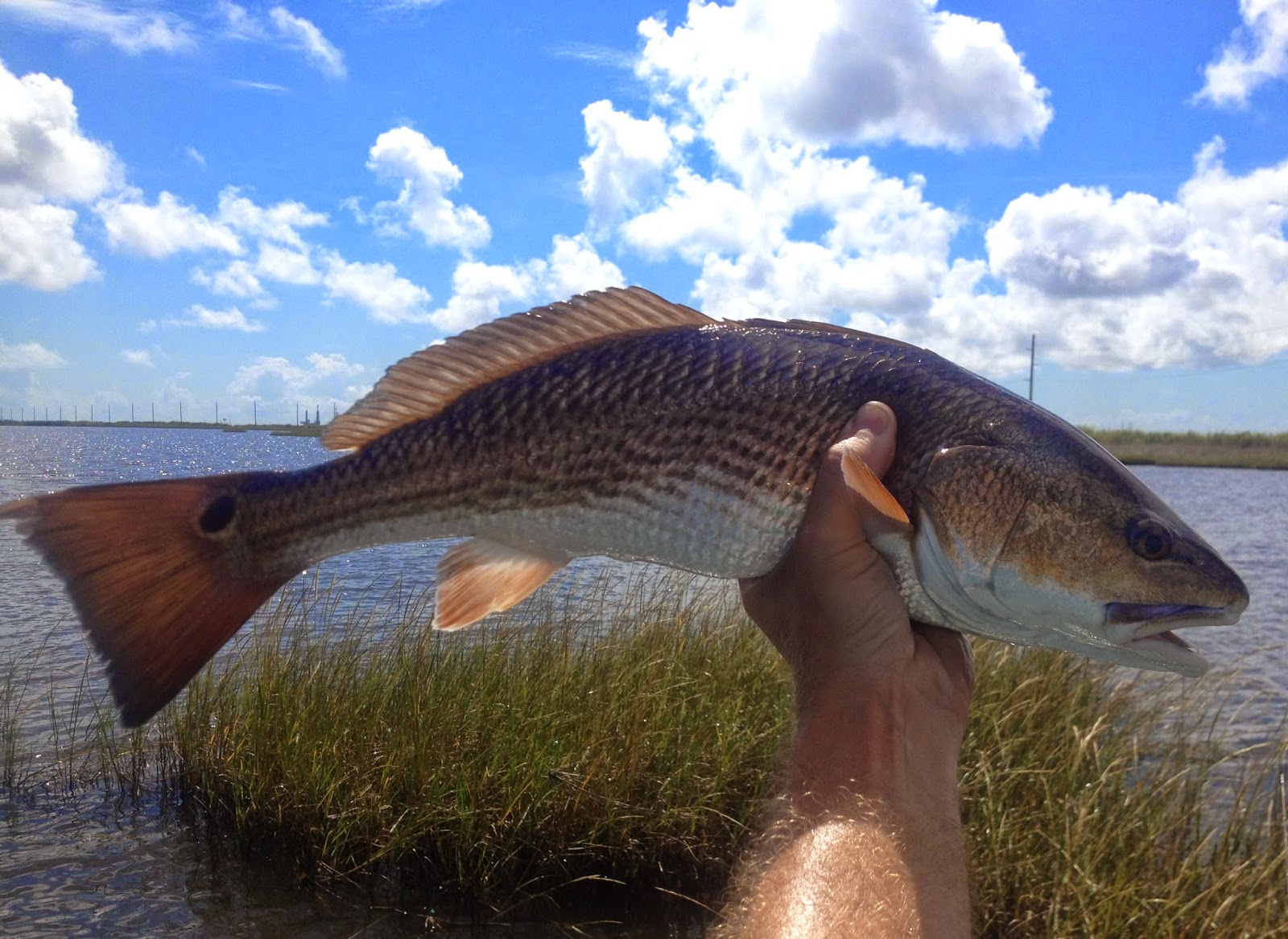 Found a few.  Last fish was caught around 1 pm.  Final tally for the day, ~30 reds (couple baby bulls and 1 legit bull), ~20 mixed/trout.  My plan of leaving by 2 was right on track.  Time to load up and head home.  Don't remember the drive...and the rest of week has been smooth...you could burn my house down and I wouldn't care.  I'd move to SELA tomorrow and feed the addiction on a regular basis...and be easier to deal with I might add!!

Posted by looknfishy at 2:08 PM