Finalist in the Orvis "20 Days in September" contest

Very excited to learn that the photo below was included as a finalist in the "20 Days in September" contest.  Here's the back ground on it. 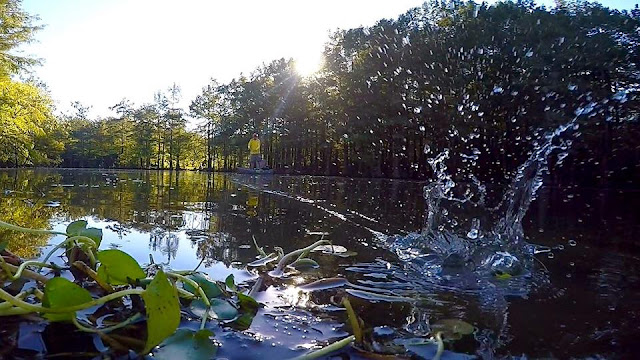 The day before I was editing another shot for my video and I noticed how cool a splash down shot I had was and the final shot was hatched.  It wasn't the same view but I could tell with some tweaking...filtered sun light, finding the right background, etc.. I had a cool vision in my head but I only had one day to accomplish it.  This was my day 20 photograph.  Friday morning I dropped my girls off at school and drove to a spot I knew would place the sun behind me without overexposing the camera.  I was a little anxious, not something I've ever experienced with photography, because I was literally fishing for a shot.  After I had the camera in the right location.  I backed off and realized I needed to get this right or it was never going to work.  The challenge was to accurately cast close enough to the lens to capture the splash but not splash the camera and leave water marks on the lens.  It took about 10 minutes from set-up, paddle out, cast and repeat (just in case I splashed the lens).  Then I went fishing because that's what this challenge was really about.  When I looked at the footage later that day I instantly realized I had captured the imagine in my head.  That in itself is reward enough.  Most of my photographs are after thoughts, captured after the fact, but this one was planned.  This challenge really inspired me and I believe that was the true nature of the Orvis "20 Days in September" contest.

To be clear I'm not soliciting any votes.  However, I've seen the photographs and they are really good.  I followed Mike Sepelak's of Mike's Gone Fishin...Again 20 day journey and was excited to see one for his photos included.  So, here's the link and if you decide to vote, you'll be entered to win an Orvis "Safe Passage Sling Pack."  You can vote for your 3 favorites here:

Posted by looknfishy at 9:42 AM