My wife and I decided to take off on a week long road trip to celebrate our 15 year wedding anniversary.  We didn't plan a destination...but rather a direction, sort of.  We decided to just take out the Rand McNally (20 year old-we've used many times) and start driving but that decision wasn't made until Saturday afternoon, after dropping the girls off in Central AR for the week.  So, it's about 2:30 in the afternoon and we're looking at the map.  Time to make a decision.  In the South, the temperatures were HOT...flip flops melting hot.  I love my flip flops, not going south!  Checked the weather (hi 80's low 50's all week) and decided to drive north and follow the "Great River Road".  We traveled 2200 miles trough 7 states (AR, MO, IL, IA, WI, KY, TN) 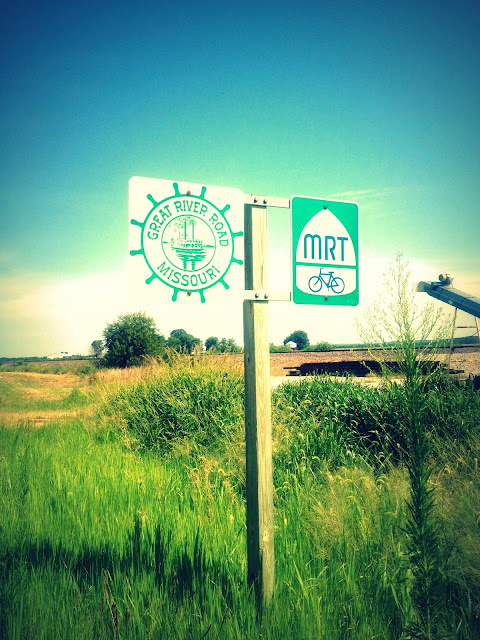 Our first few hours got us to the Missouri border and we had to make a stop for dinner.  The theme for this trip was water and paper maps (no GPS) like we did when we first got married...that simple.  Looking at the map we located Lake Wappappello outside Poplar Bluff, MO and started driving that direction. 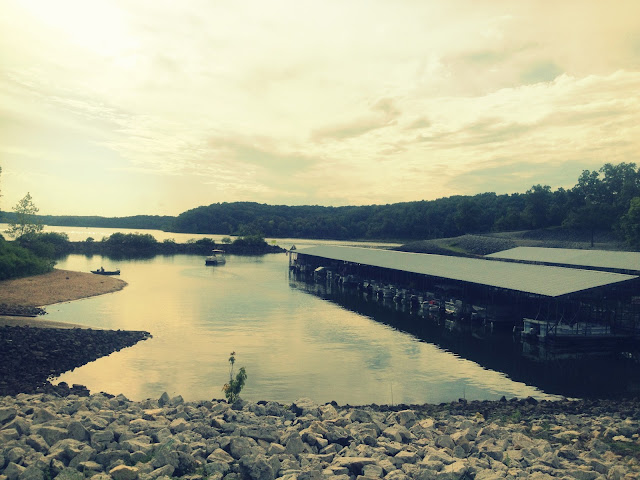 As we were driving in, we passed a cool local spot with some RV's parked in the back and a few boats in the front lot.  Looked perfect for us.  I could smell some goodness in the air...found we're I'd be pulling up a chair for dinner. 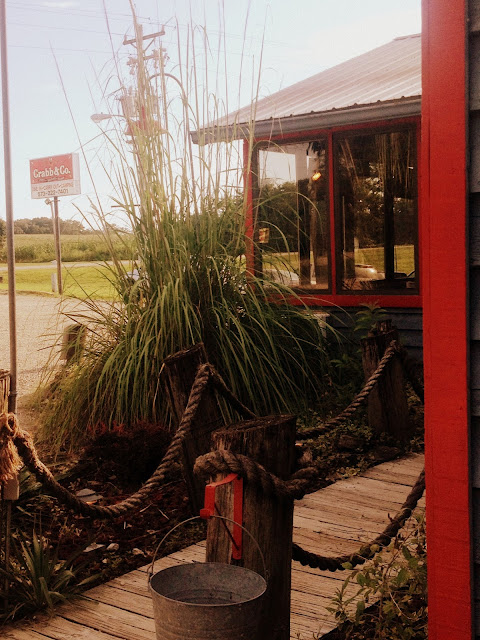 After dinner, we decided to make up some miles and not stop again until we were in St Louis.  We stayed on the scenic route and drove into the city about 9.  Stopped about a dozen times trying to get a room for the night, but everything was full.  No worries, that's part of road tripping.  The Cards (I'm a Cubs fan...the Cards are my nemesis...don't think I didn't notice) were playing a home game so every hotel in the city limits was full.  We eventually found a dump to rest at for the night.  It was terrible...I mean sleep in your clothes, don't touch the floor, kinda filthy.  It got worse, no kidding.  The next morning, I was getting breakfast...continental breakfast was 2 kinds of cereal and milk.  But they did have coffee, GREAT!  As I'm making a cup, the guy manning the breakfast area (are you afraid someone would steal the cereal), informs me that it's closing...breakfast is over, NOW!  I grab a bowl and start to pour some cereal in it...but the dispenser is broke.  The wheel spins but no crunchy goodness comes forth.  No worries, I just really wanted coffee...trust me, I'm way nicer when I have coffee.  BUT....before I could walk away, the guy grabs my bowl and starts using his finger to turn the wheel and basically serves me handfuls of crunchy goodness.  Me, "dude I'm good", him..."it works".  Then he gets the milk.  Think that's bad...it gets worse.  As I'm trying to wrestle my bowl away from this guy, a woman walks in and grabs the coffee machine.  Me, "are you taking the coffee", Him, "yes, breakfast over".  All I could say was, "I'll trade you a bowl of cereal for a cup of coffee". 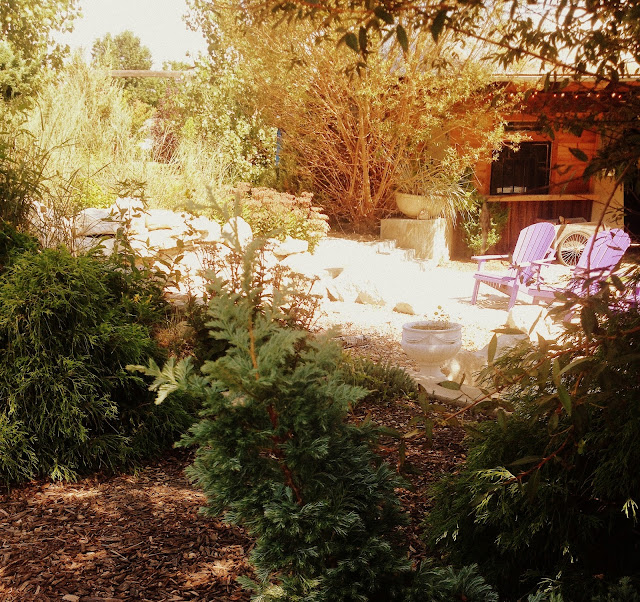 They didn't get it.  We stopped at McD's, so my wife could eat...after 15 years...I understand the dangers of a hungry woman.  There's a reason lionesses do all the hunting!  Afterwards, we drove straight to the, "Mighty Mississippi".  We were finally on the "Great River Road".  About an hour later, we ran into Overlook Farm, in Clarksville, MO.  Of course, it's the perfect place for breakfast, but we're good...I had a bowl of cereal and my wife had McD's.  So we just walked around and stalked the paying customers. 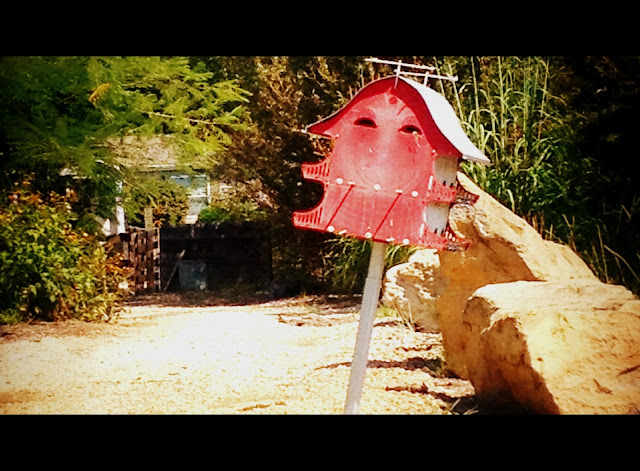 From the pamphlet I stole, I learned it's a "farm to table" experience, with an Inn.  They also host special events and weddings...sounds very romantic.  Not my thing, I prefer handfuls of cereal and filthy Inns. 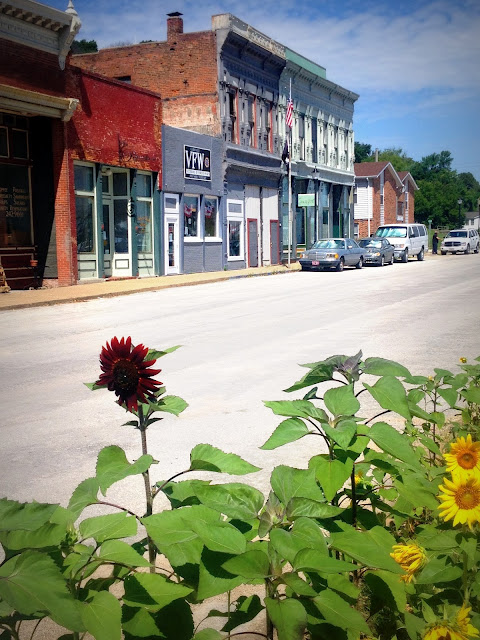 Next up, was Clarksville, MO.  We parked and walked around.  It was 11 am, it had already been an eventful day.  I found a pub down the road from the VFW and had a beer.  It was good and much needed.


After watching a barge shove off and head south, we continued north.  Passed several scenic overlooks with views like this.  We stopped at all of them. 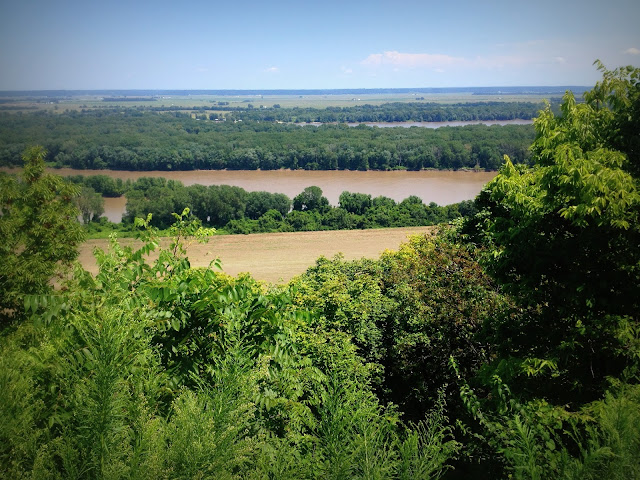 We decided to cross over into Illinois and see what that side of the river looked like.  It was mostly flat.  With miles of corn fields.  Eventually we found a nice place to sit for lunch that had live music.  They didn't mind us pulling out our camp chairs and setting under the tree.  There was a nice breeze and the temp was in the mid 80's...it was really nice! 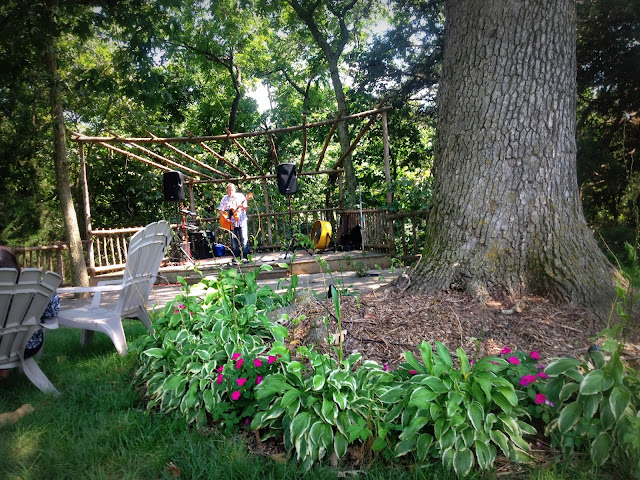 It was mid afternoon and we hadn't decided where to sleep.  So, we pulled out the map and found a lake.  Before long we were at Lake McBride just outside Iowa City, IA.  My wife really wanted a sunset cruise.  No problem...we just need a boat. 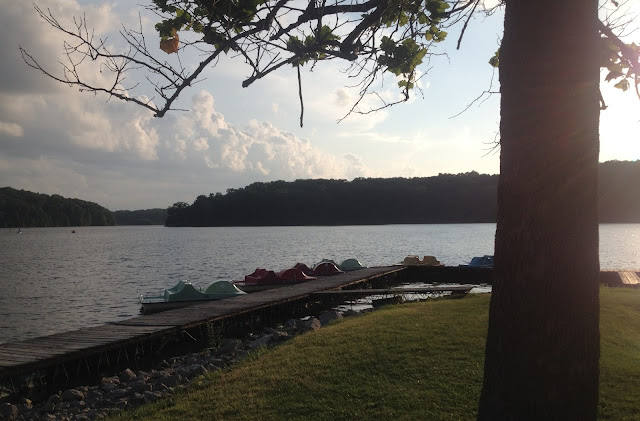 Found 1 or 10.  And off into the sunset we peddled.
If one wanted, they are plenty stable to fly fish from, and have a back casting platform... 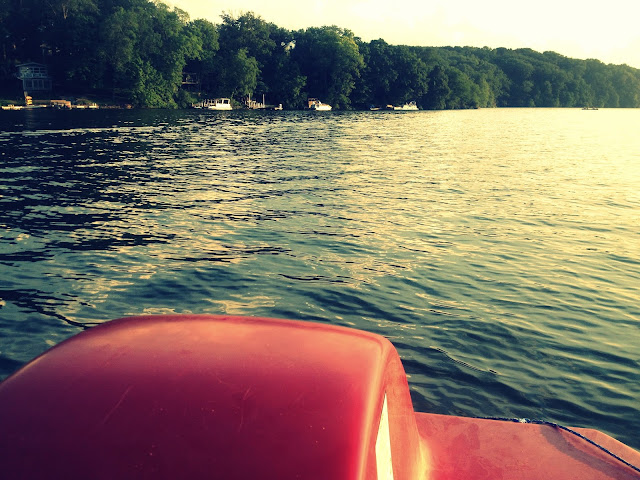 The next morning, we pulled out the map again and decided on the next stop.  I had planned on spending 1 day in the "Driftless" fishing and I was sure she'd have a great time camping, or shopping and doing girl stuff in Decorah, IA.  So that's where we decided to drive next. 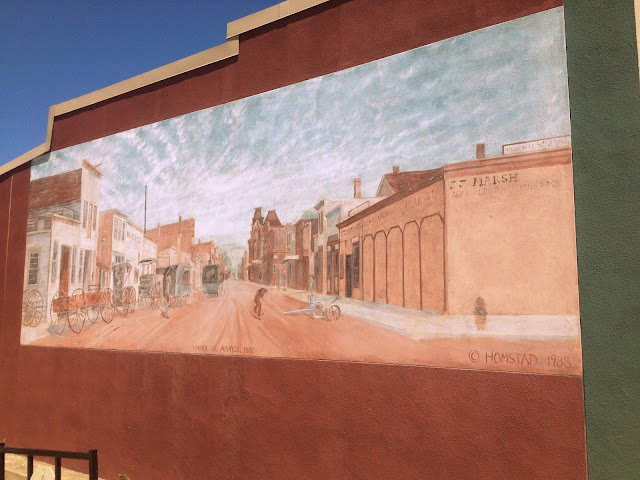 As were driving around town we happened to park beside a B&B.  Actually, I parked so I could point out the camping area on a map...and there it was...interesting!  She decided she'd rather stay here instead of camping.  I wanted to fish...so claw foot tubs and Keurig coffee it was!  Funny story about the B&B, I'll cover later. 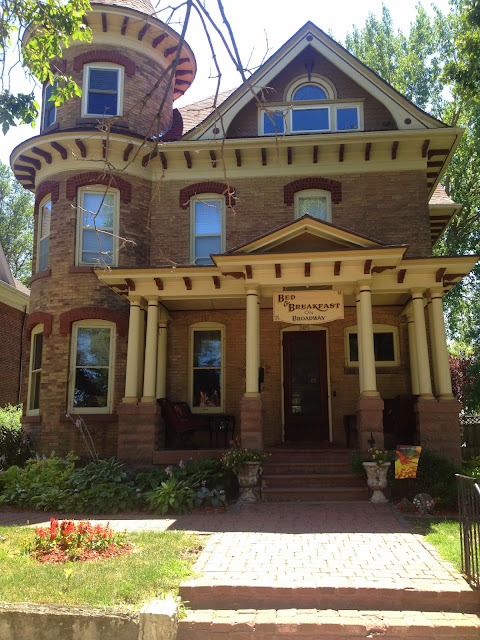 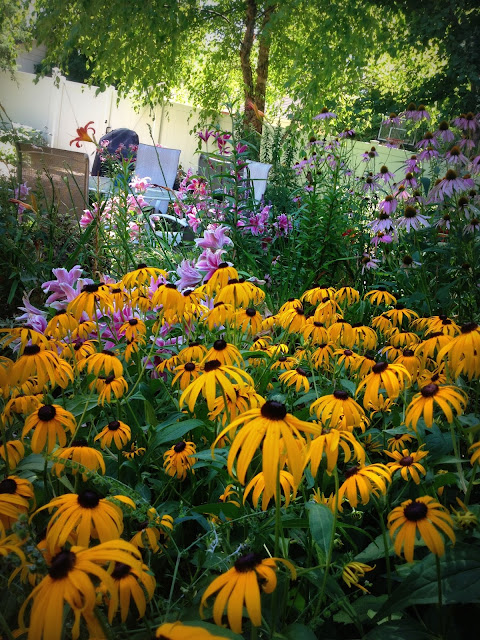 We spent the afternoon walking around town.  Making appointments for my wife and such.  Really, she has no sense of direction, and if she got lost while I was fishing, I'd never hear the end of it.  So I did my best to acquaint her with the small town. 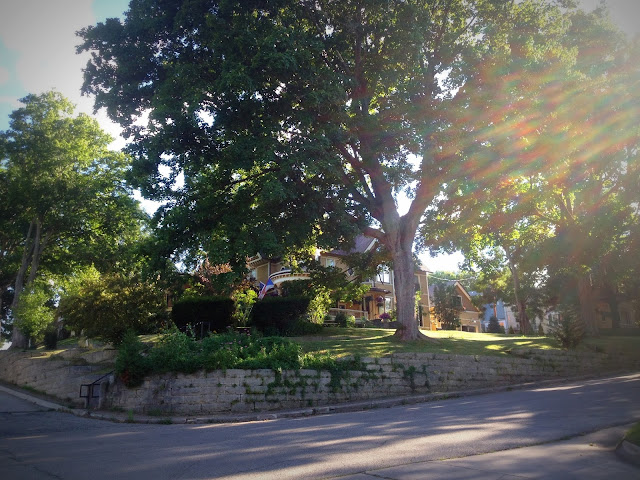 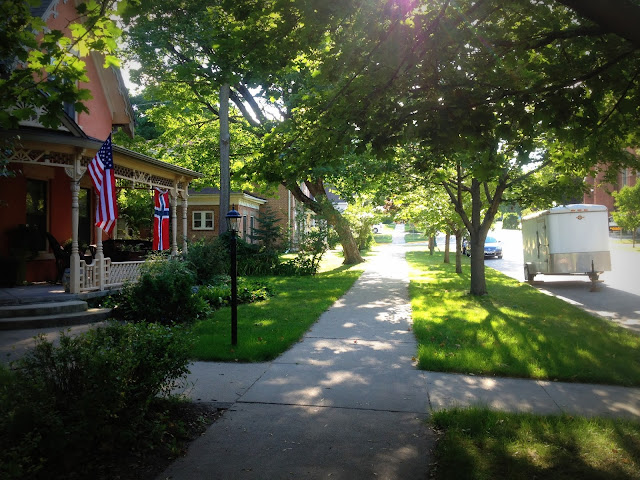 At this point, I've found the "cutest" little town (her words), garden full of flowers, coffee shops, good food, shopping...I feel like I've done my part to secure a day of fishing.

The fishing was awesome, so check back for the follow-up post. Of course, if you wanted a sneak peak, I update Facebook and Instagram more often.