I could begin this post with the details of the huge red below.  But that's no fun.  Instead, lets back this story up a month or 2.  I have been trying to get down to SELA since October.  My last trip was in June.  I never go that long between trips.  That's the beauty of living in SEAR, basically on the LA/AR border.  I'm 5-6 hours drive to great kayak fishing water...fresh and salt. 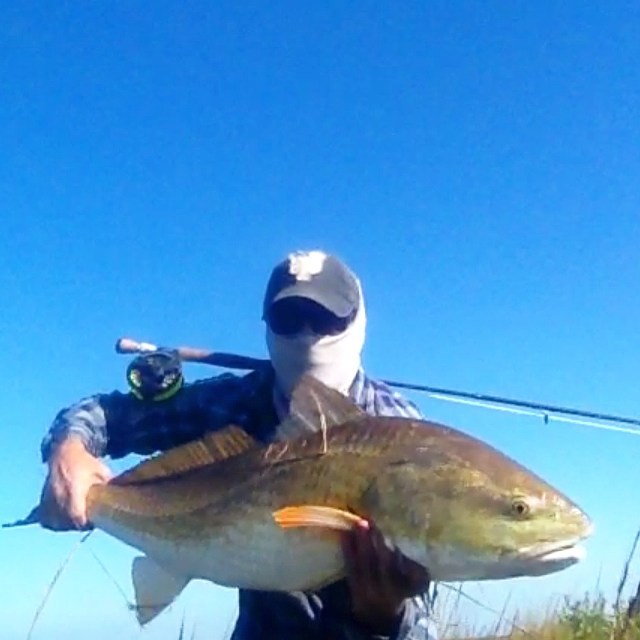 In October the weather becomes more kayak angler friendly in SELA.  Less melting of people while sitting in plastic boats.  From that month until December it just gets better for both, catching and angler comfort.  Unfortunately, there just wasn't a great time to go in October or November.  The weather was either terrible or it was Thanksgiving and my wife had that look that said, "I dare you!" 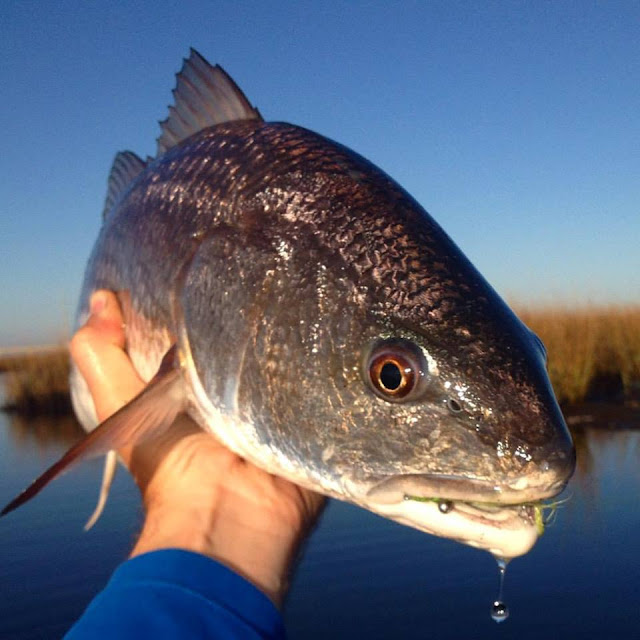 But finally it all lined out.  The conditions looked awesome for sightfishing reds in the marsh.  Honestly, anytime is great for chasing reds in SELA if you just want to blind cast and work the marsh.  I prefer to find a target and test my kayak ninja skills.  There are specific conditions I look for when I decide to drive 6 hours.  So you can imagine my excitement when I saw a forecast for nothing but sun and no wind!  That excitement got supercharged when I watched a video about sightfishing colossal reds in the marsh.  http://www.saltstrong.com/louisiana-winter-redfish/  Like I needed help.

I closed my eyes Sunday night and pretended to sleep while the images of colossal reds danced in my head.  Monday morning took forever to arrive.  When it finally did I was sitting in my truck at the road side access. 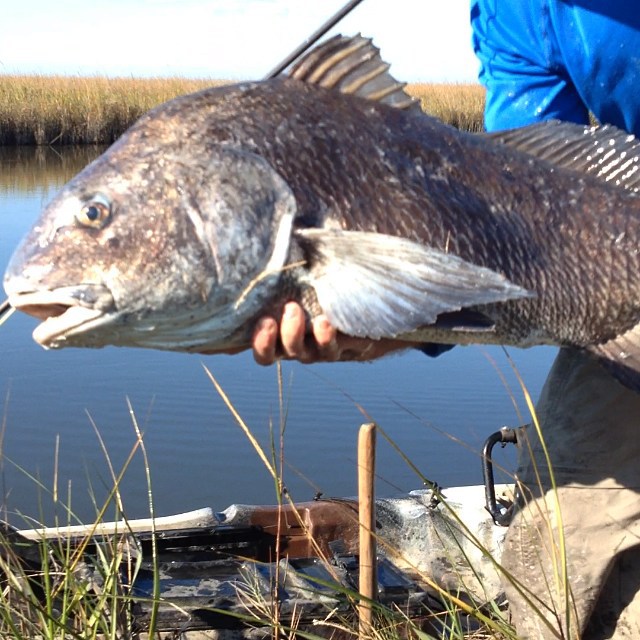 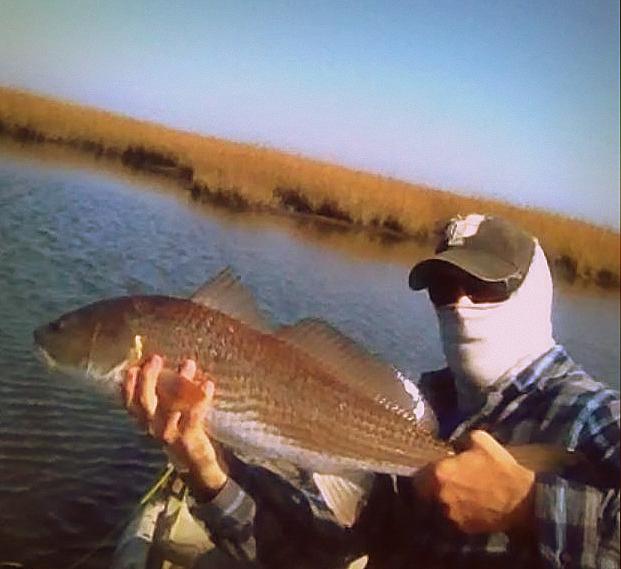 After that the day was just insane.  I had a solid day of catching and covered many miles of water.  I was exhausted from not sleeping and fighting upper slot reds all day.  I stopped for lunch and considered turning around and heading for the truck.  As I was resting I noticed schools of bait going crazy in the incoming tide.  The flow was evident and a current line was very obvious.  I know a fishy sight when I see it. 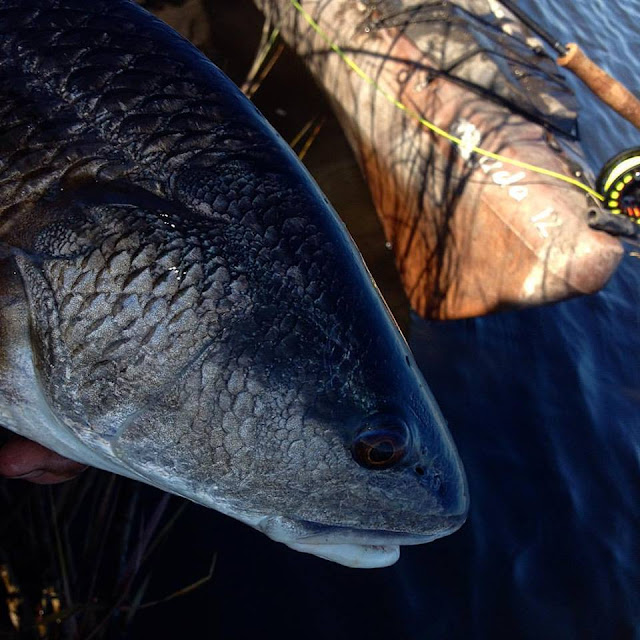 I decided to stay and fish that hole.  But nothing was happening.  Now I'm done...but I can see another marsh choke point.  I convince myself to go investigate that one.  As I'm getting closer, I can see the same signs of bait activity.  Expecting the same ending, I consider turning around again. Just as I'm about to leave, I see a huge flash of gold!  The feeling that went over me was somewhere between sheer panic, like when you skipped school for the 1st time and you're trying to get home and intercept the schools phone call (maybe that's me).  And...I just saw a freaking leprechaun and his shinny "pot of gold!" 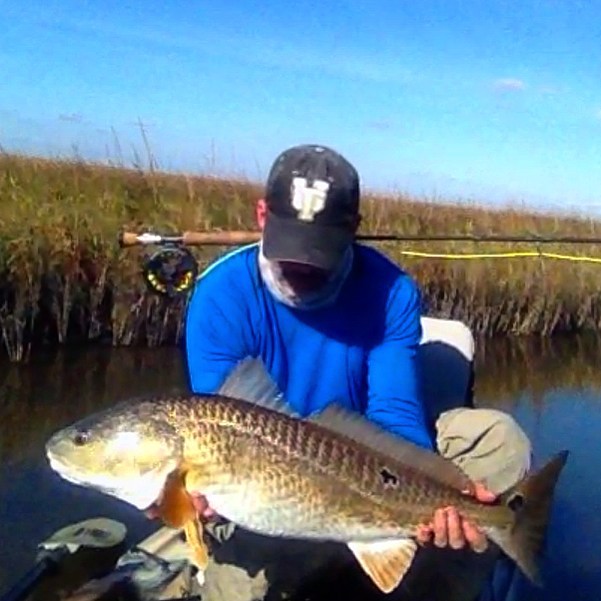 Each feeling carries a specific amount of clumsiness and expected increase in tension.  Which means failure is the only possible outcome.  I always got caught skipping class and the only leprechaun I ever see is on a marshmallowless box of Luck Charms (why do kids just eat the charms).  That's what I was dealing with as I came up with a game plan for getting a fly in front of that red.  I pushed polled up to with in 30 ft, watching as the beast would torpedo through the school and disappear.  Then moments later it would reappear from another direction.  It wasn't being cautious but it's path was nearly impossible to predict.  I knew just blindly slinging fly line across the school was sure doom...so I waited.  I watched for a few minutes until I could see it coming from an angle I could work with.  I placed the fly a few feet out from its course and started stripping.  Not for cash... 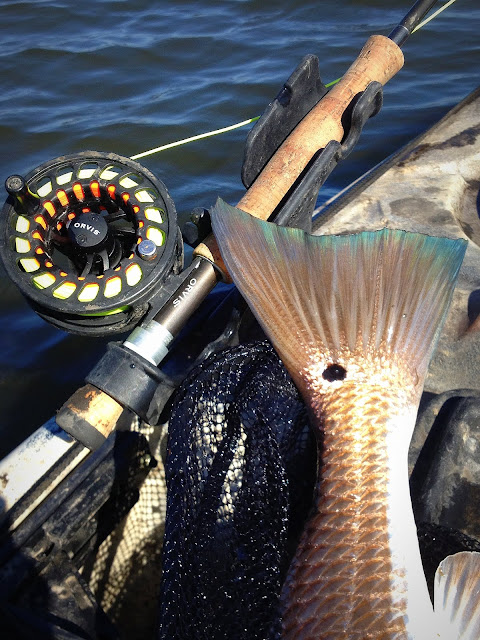 Fully clothed, buffed out ninja mode, I watched as the red turned away.  Failure, ball game, walk of shame, basses loaded 2 out and you fouled out.  You name the emotion and that's how I felt.  But wait...it's back up.  I have a chance to be a hero again.  Center your yoga chi and get back in the game dude!  Put the mess of fur back in the water.  Start stripping again.  Not for cash... 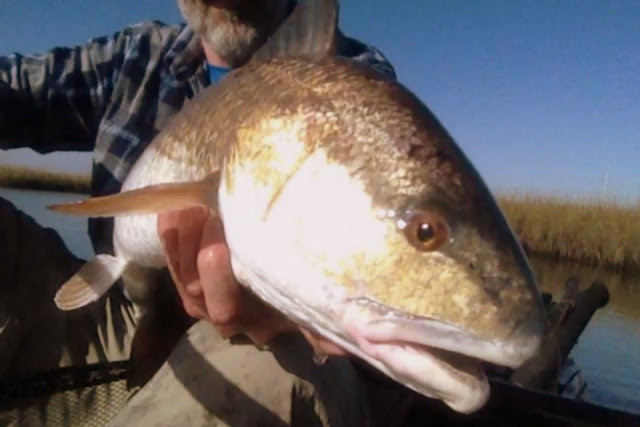 See the "V" and line goes tight...game on!  Then it was just hang on and enjoy the ride. We checked the left side of the mash before turning around and checking the right side of the marsh.  When those sides were deemed unsuitable for grip-n-grins.  He decided to show me this "other" spot on the far side of the marsh.  He was so excited about the hero shot that he showed me my backing several times running to get there.  It was a long fight, my forearms were on fire.  Eventually, he wore down.  I beached the kayak and landed him on an island to speed up the release.  Quick picture and rushed measurement before reviving him.  He swam away strong. 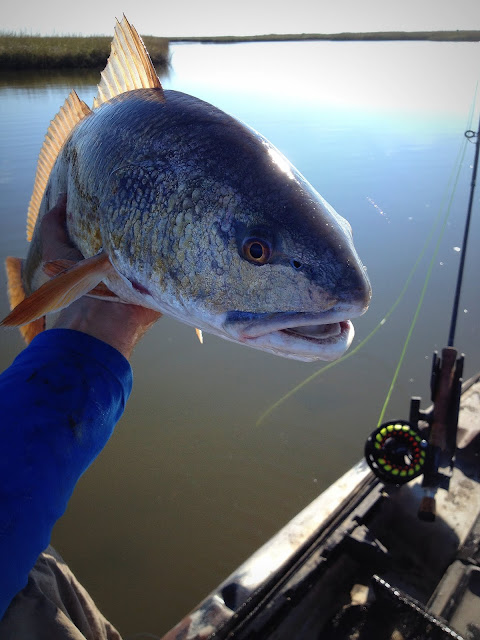 Tuesday started like Monday.  Except the conditions were nearly perfect.  I say nearly, but I can't imagine anything better.  It's just hard to say anything is perfect.  I decided to paddle to where I left on Monday and fish from that spot on.  It was a long paddle but I arrived just when I knew the sun would be at the right angle to see reds in the water.  Caught a few slots reds before I made the decision to go bull hunting. 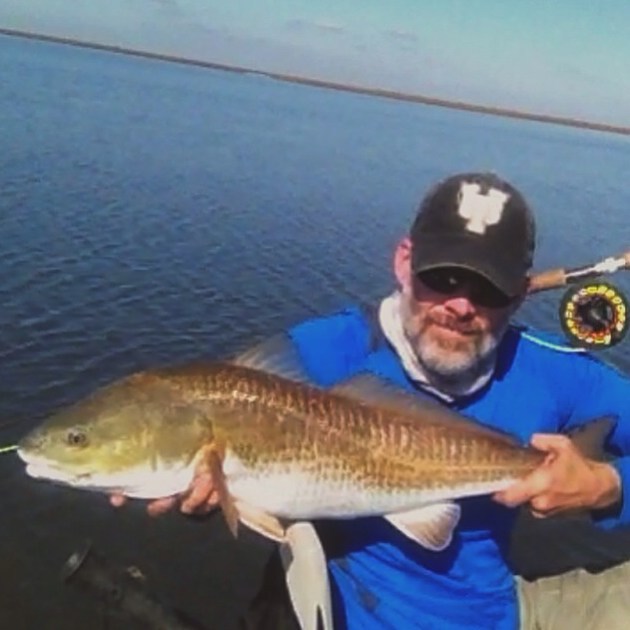 At one point I watched as 2, 35-37" reds swam under my kayak.  I didn't breath until that were behind me.  Made a half back hand cast and watched one of them eat.  The exciting part of casting to a raging bull behind you is the balance after you hook into a VW bug on steroids.  Almost went swimming as he went real far real fast. 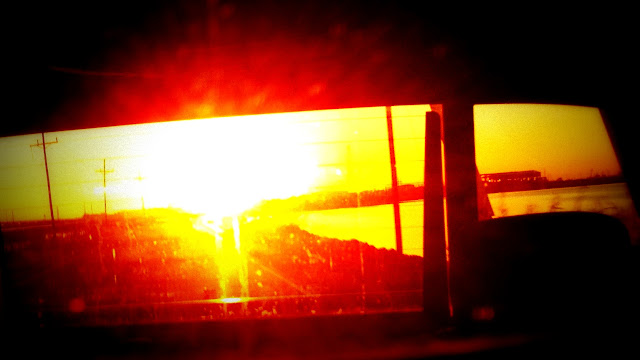 That's pretty much how Tuesday went.  Sight fished several bull reds in skinny water.  It was one of those days where the few that were lost to broken hooks didn't hurt so bad.  This was a trip for the books.  Hope I get to experience another like it.  If not, that's cool with me.  This one was a "pot of gold."

Posted by looknfishy at 7:09 PM