Family travel over the holidays meant I had a couple days to kill after the gatherings.  Had a grand plan of packing camping gear and getting lost on a new river but after a few phone calls trying to convince the less extreme anglers I hang with, they convinced me to stay local, Little Red again! 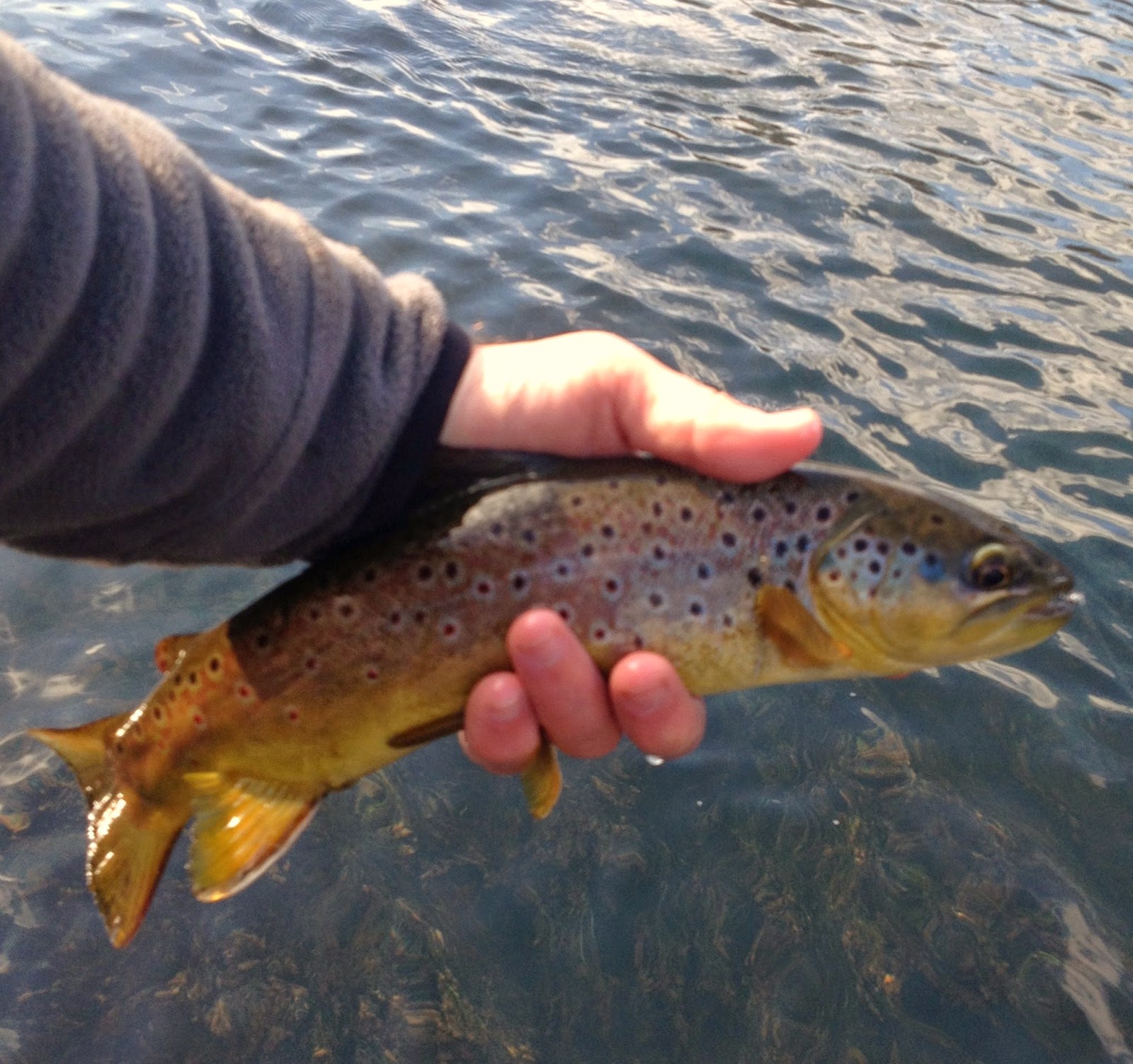 Monday was a late night, gift opening, festivities, and WAY too much excitement...talking about babies, disney world, what to do with pets over the holidays!  Wasn't long before I was day dreaming about a drift and able to excuse myself from the conversation.  Got in touch with the 1st victim, to make sure we were still rolling.  But the coldish 25f start and forecast of 35f for the high on Tuesday was enough to change his mind. 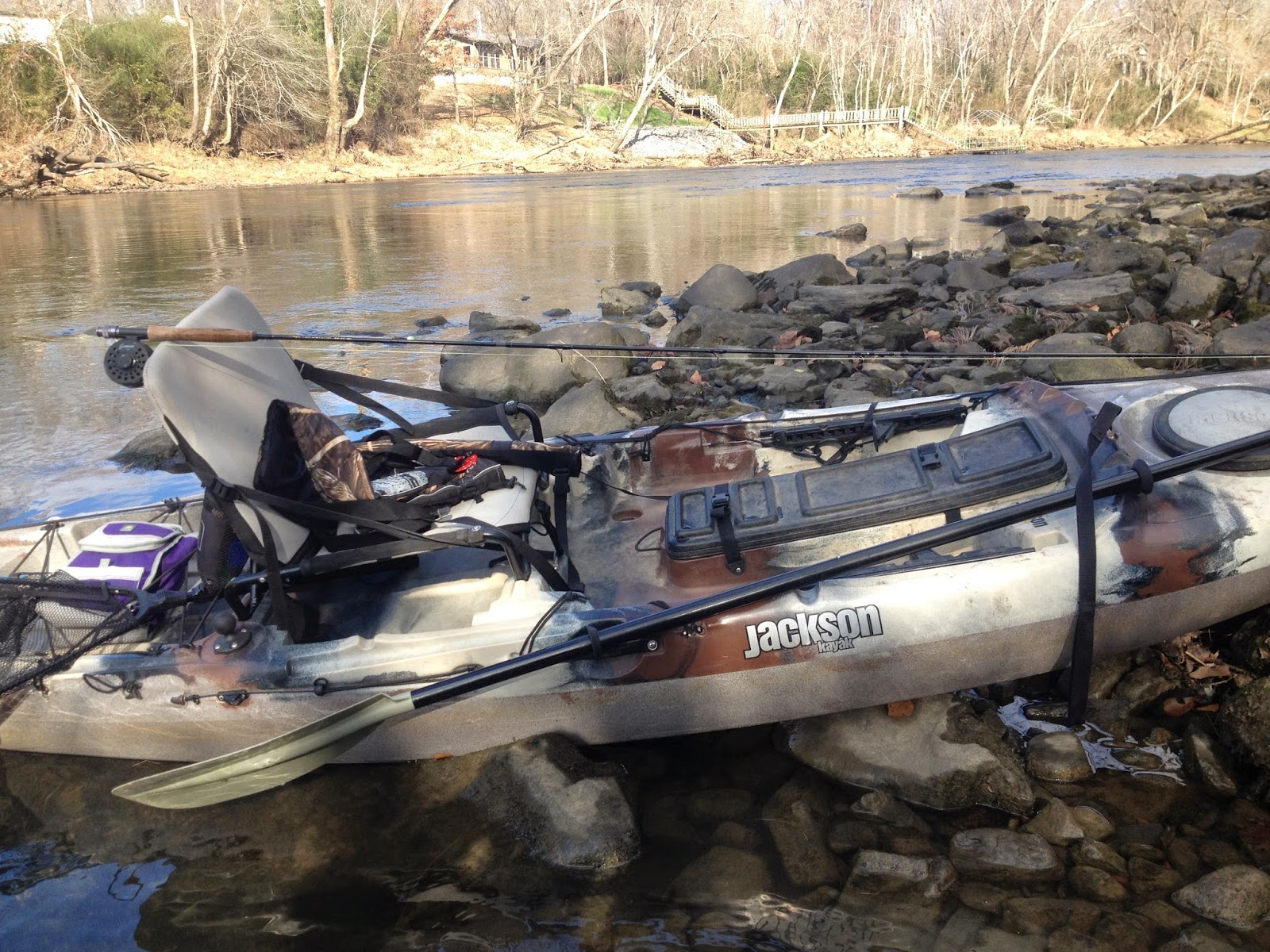 New plan, solo voyage and need a shuttle.  So I called a buddy (Thx Tom!!) that lives close to the river and he was willing to help as long as I was early...don't have to worry about that...I'm late for some things (ex, anything immediately following a trip)...but fish'n isn't usually one of them. 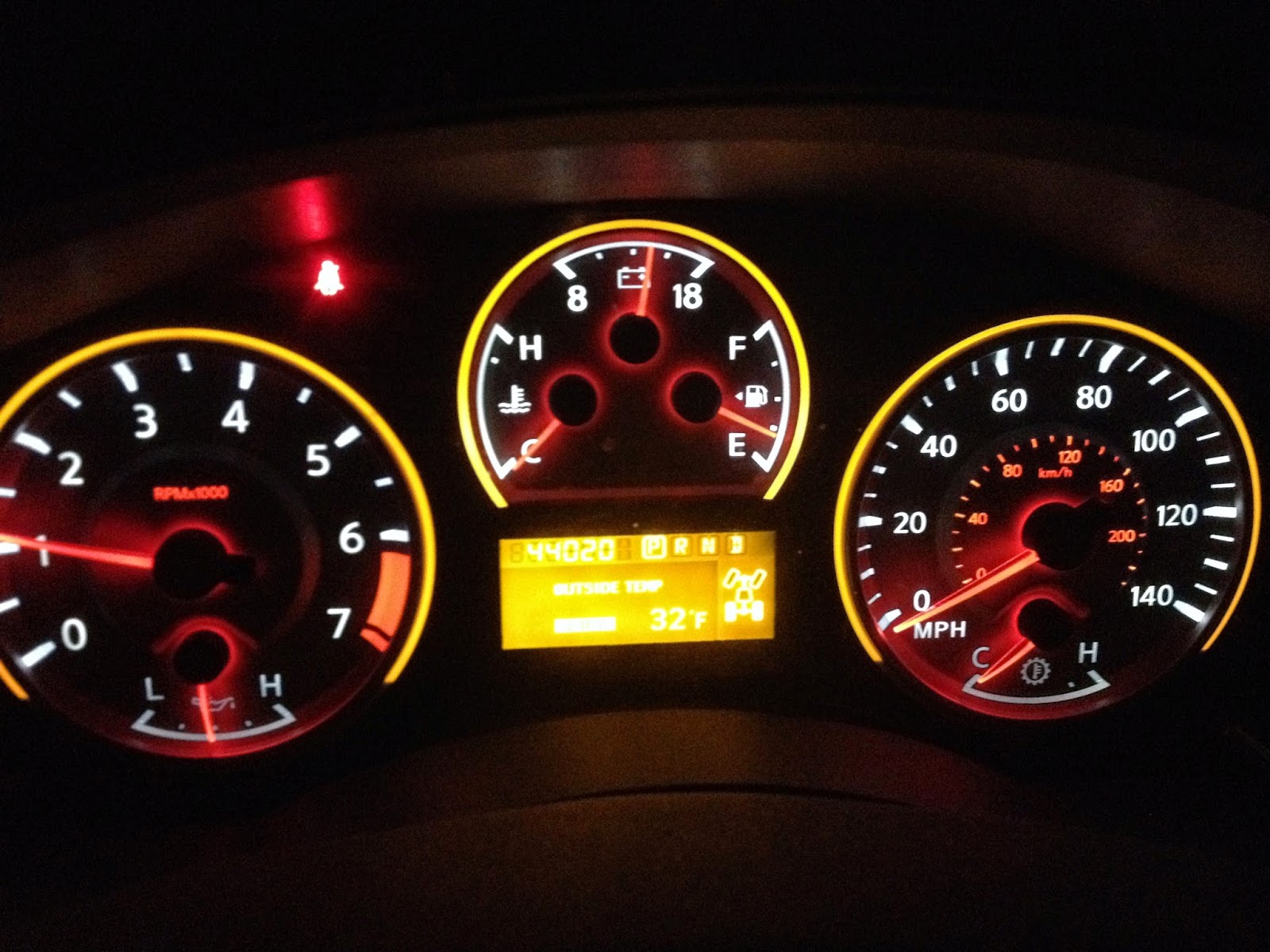 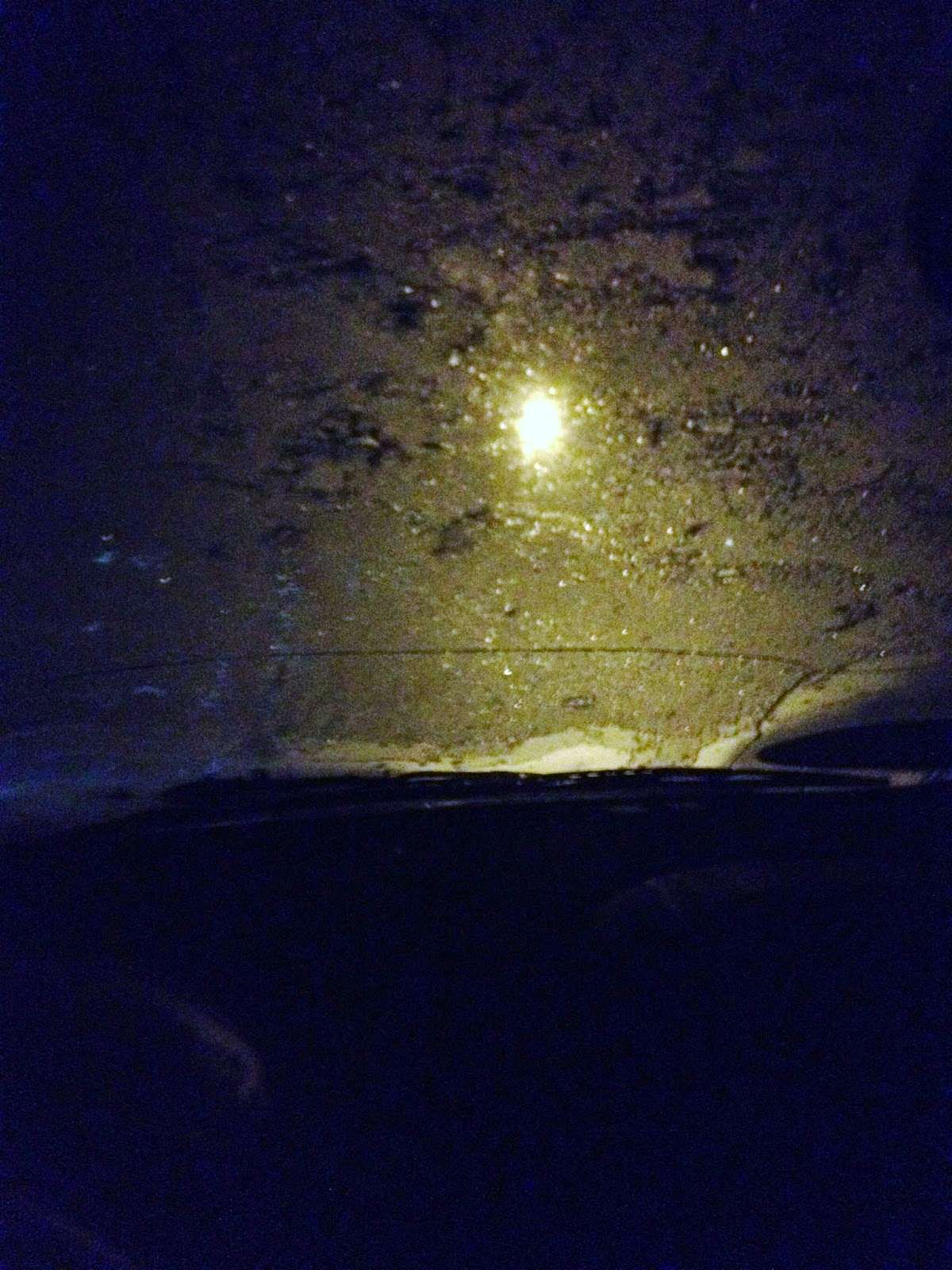 Day started at 4am, coffee, pack some calories...AWESOME left overs from the celebration the night before.  I'm sitting in my truck at 4:15am watching the ice melt off the window!! Forecast was pretty accurate.  The hour long drive always seems to take 3 hours, but I arrived on time and as predicted...so I guess it's just an hour.  Unload, upload, and we're heading to swinging bridge before 6am.  He drops me off in the empty parking lot, and wishes me luck.  As he's leaving the only other person I'll see on the river pulls up and unloads his gheenoe (those are nice look'n boats).  We'll pass each other repeatedly all day and share relevant fish inTALE!

First thing I noticed after I get started was the water had a little more flow....gonna start with a streamer.  Last trip I had to walk the 1st shoal but not today.  I slide right down past the boulder field and stop at a good fall out.  Had some success here last trip but not today.  Streamer wasn't working, after 25 mins I departed for a new location.  I was set on throwing the streamer for the 1st 3 hours...but it never produced.  Some days you just have to feed'em what they want.  Obvious problem was figuring out what they wanted. 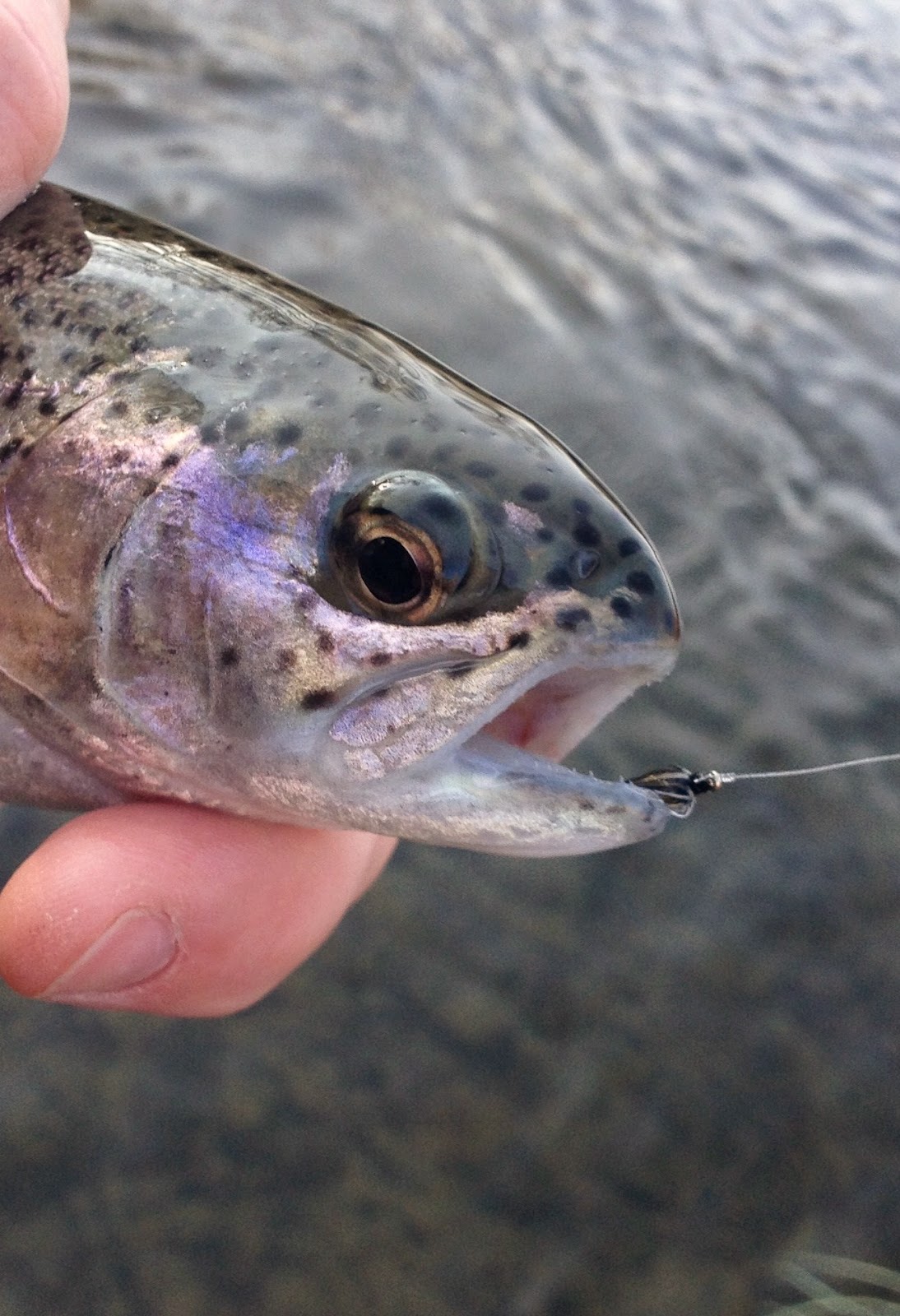 I switched to a soft hackle but they didn't want it.  Managed a few but what I remember most was dropping my reel in the water while releasing a bow and having to reach in elbow deep to retrieve it.  It's a guides icing over, paddle freezing to the webbing, kind of day.  It was a great experience, give it a try sometime!!! Still haven't found a consistent pattern so I switched again....and again...and again.  Finger tips are numb so it's pretty easy and I quickly accomplish this simple feat.  Feeling frustrated, I had no clue what the trout wanted, but I wanted an early lunch and needed to warm my hands up.  Time for an intermission!!


Break must have been the answer b/c after lunch I found a descent midge feed...and decided to feed'em what they wanted.  It lasted about an hour and was very intense...or as intense as drifting a midge under an indicator can be.  But it was working so I kept doing it. 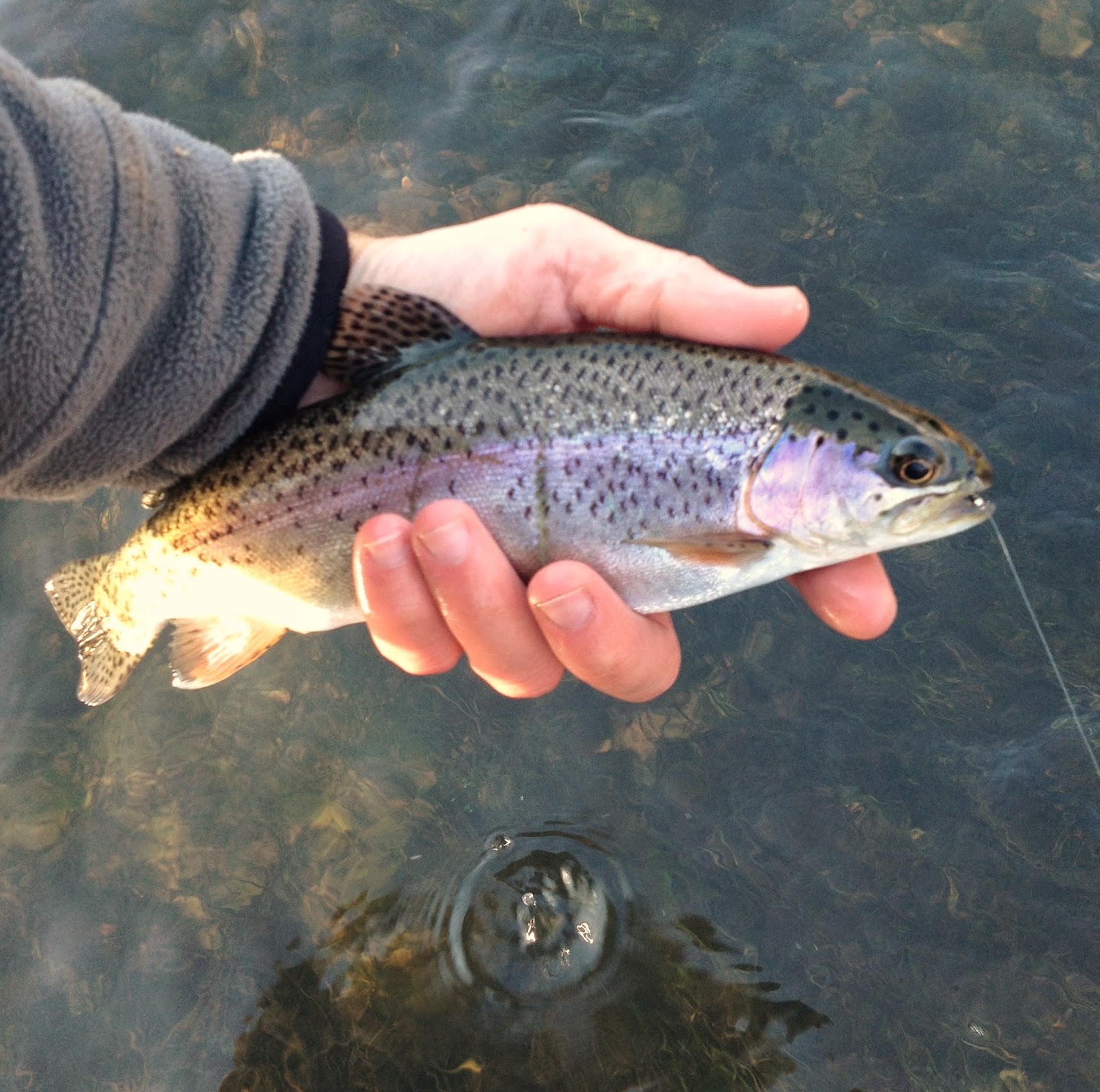 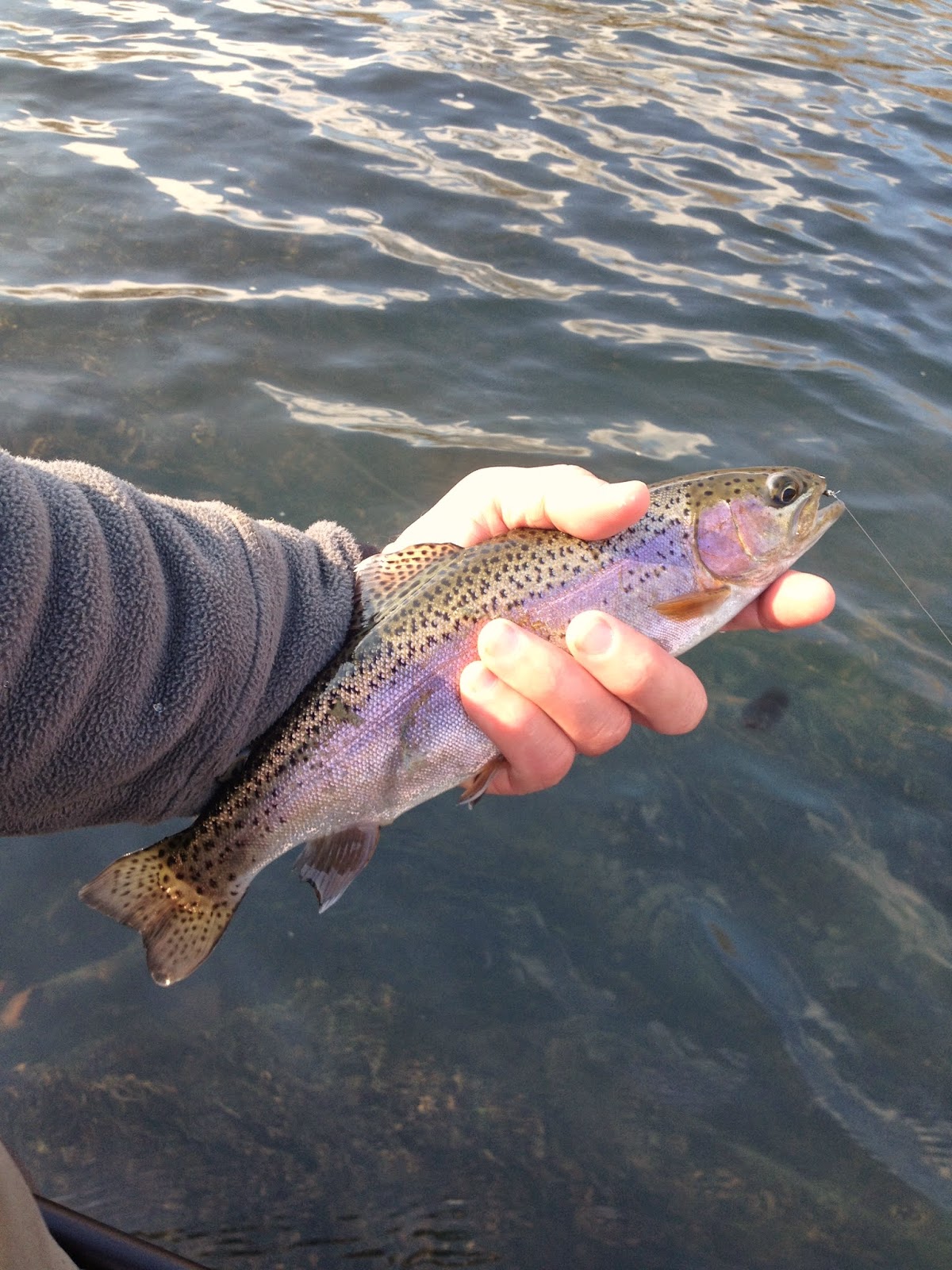 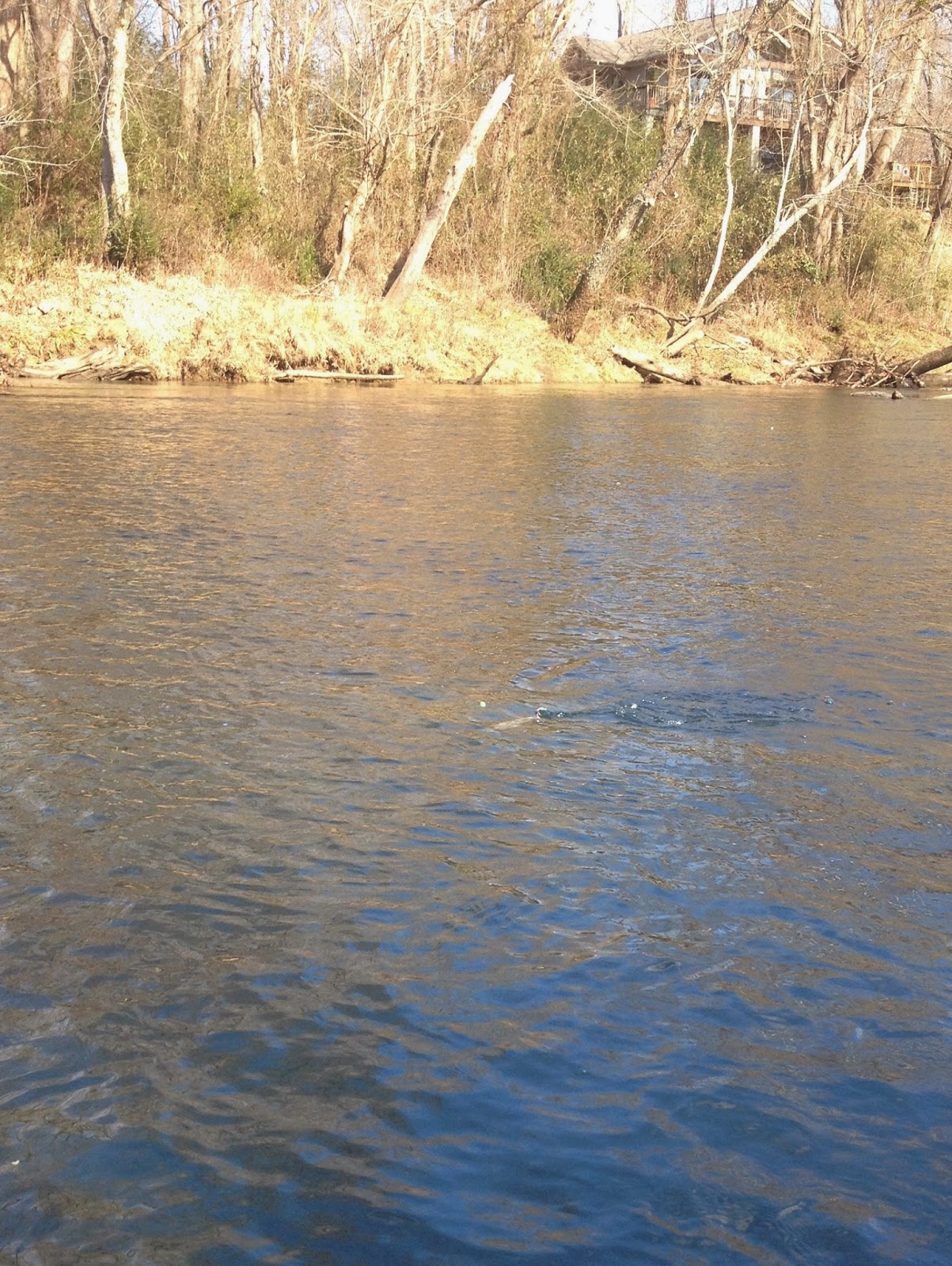 Trout would popcorn the surface for 20 mins and rest for 10 mins or so before repeating.  I managed to sneak out far enough that I was nearly in the middle of the action.  Fortunately, I found a few browns...and missed a good one.  So my interest in indicator drifting stayed hi. 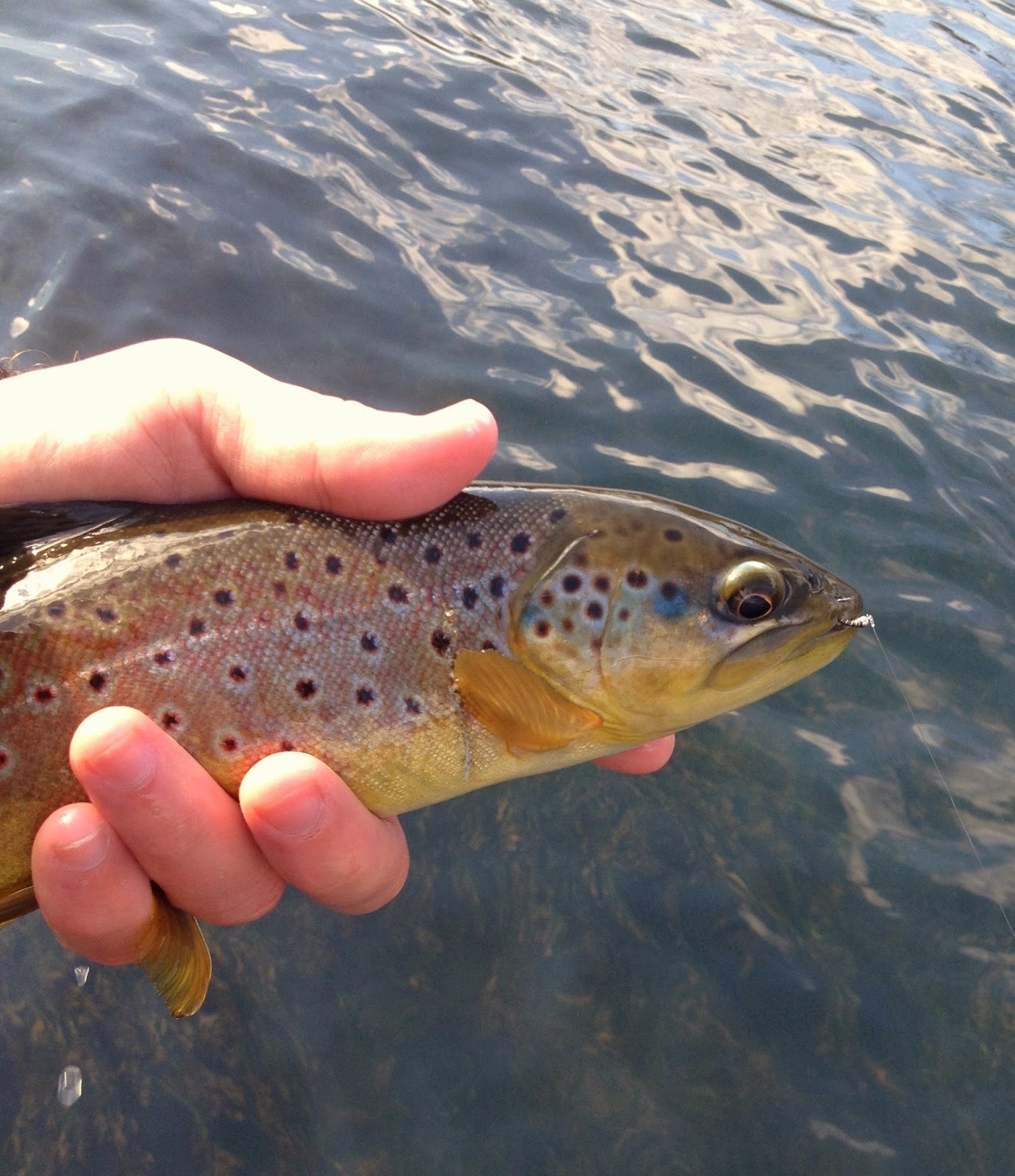 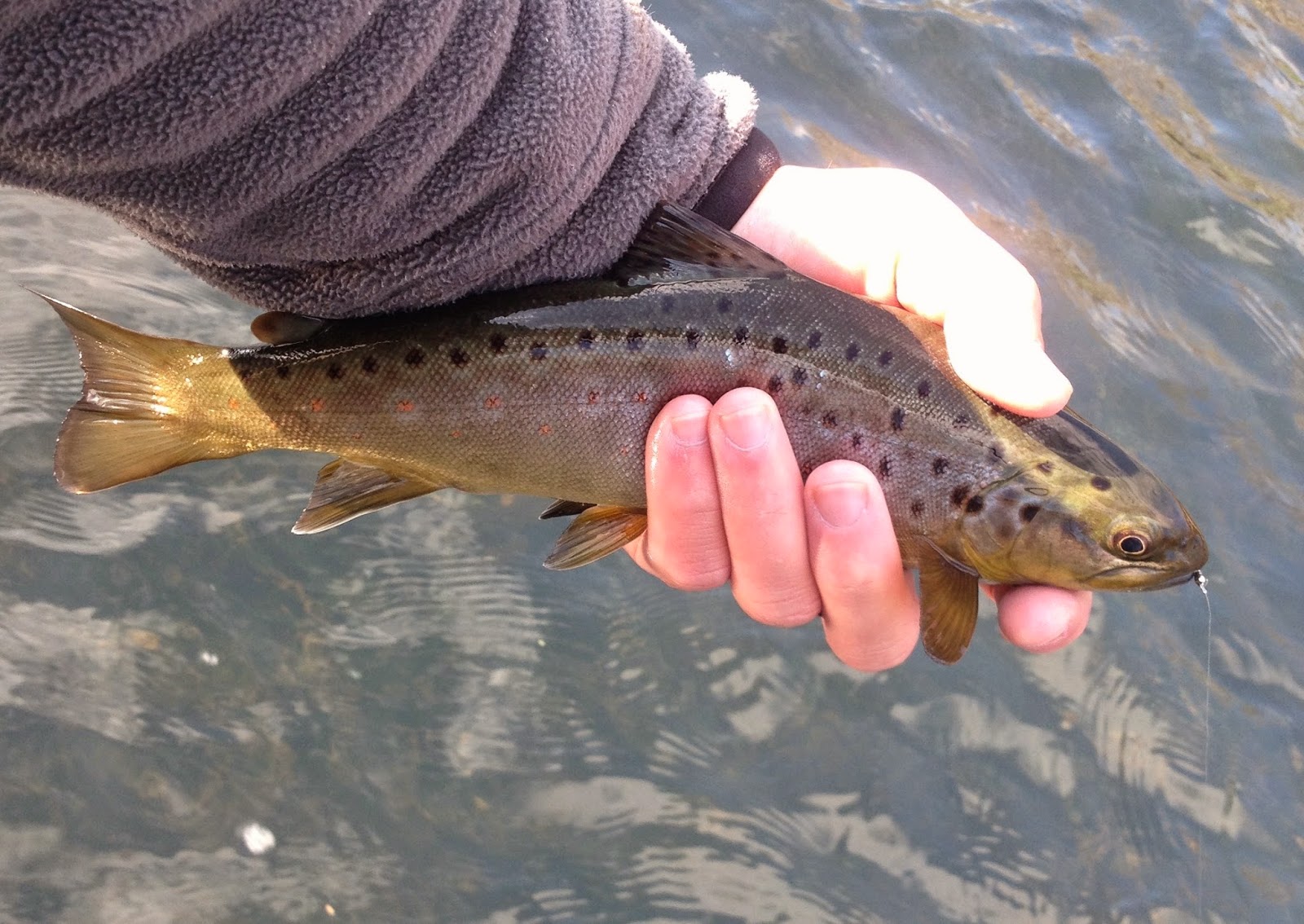 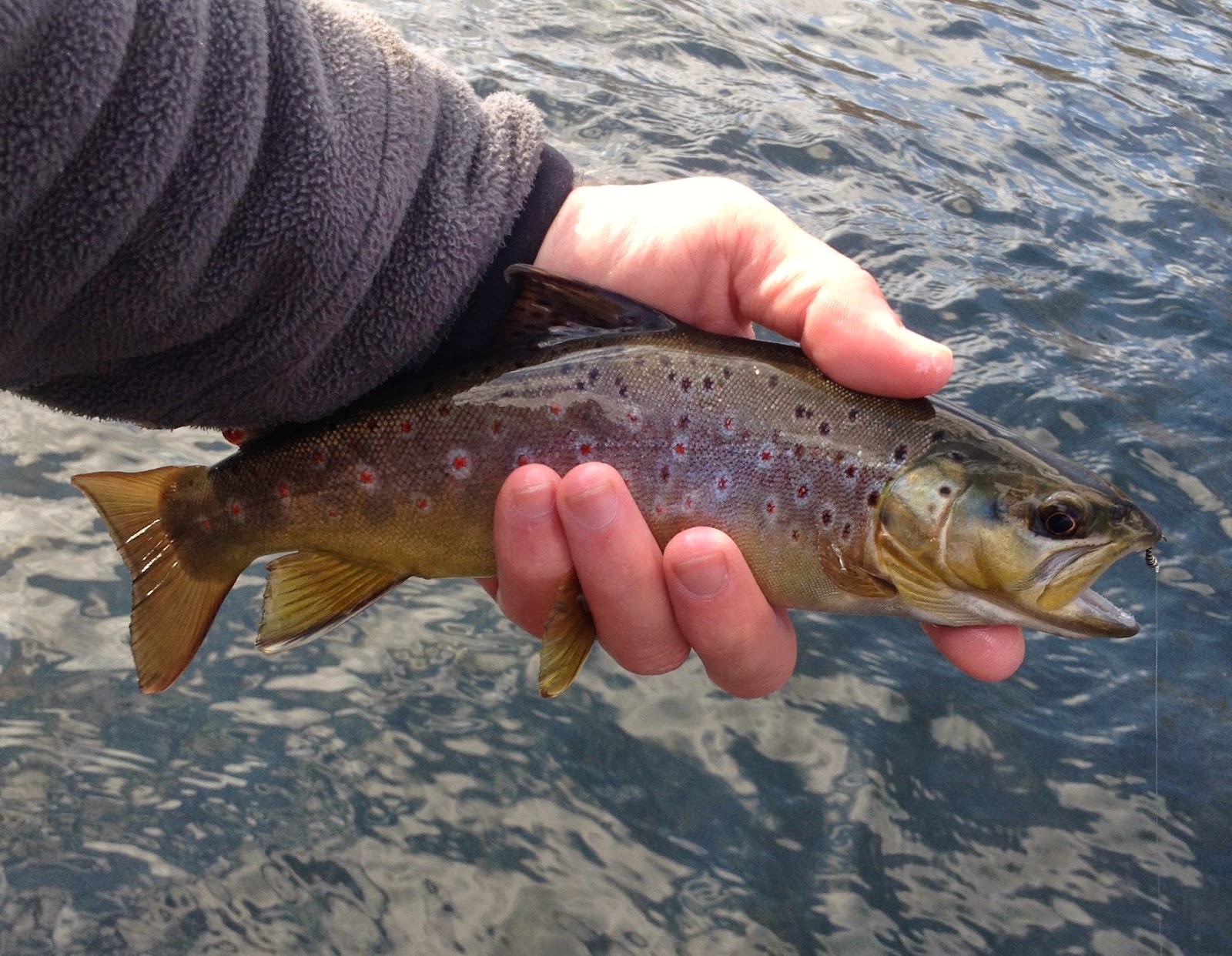 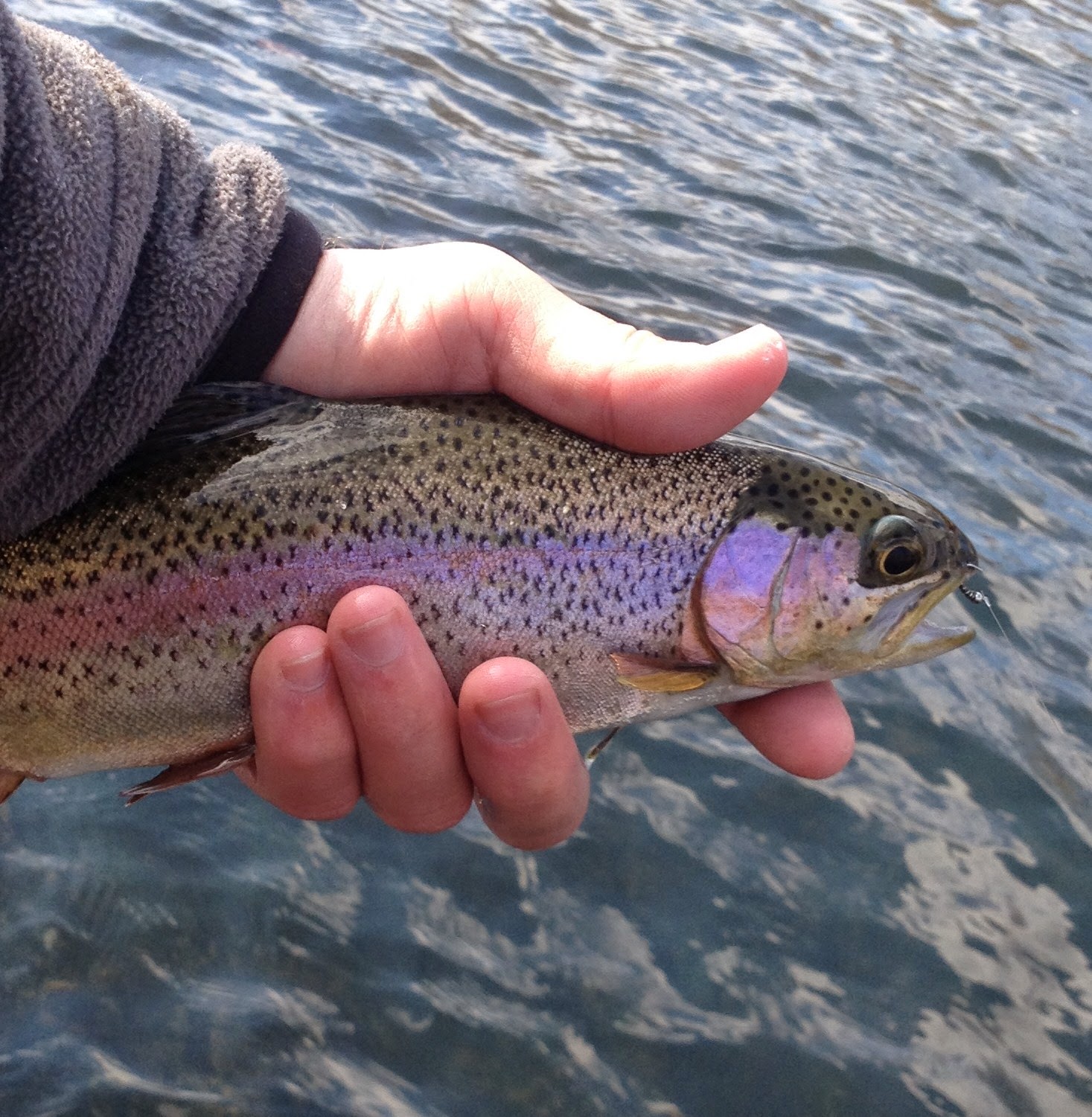 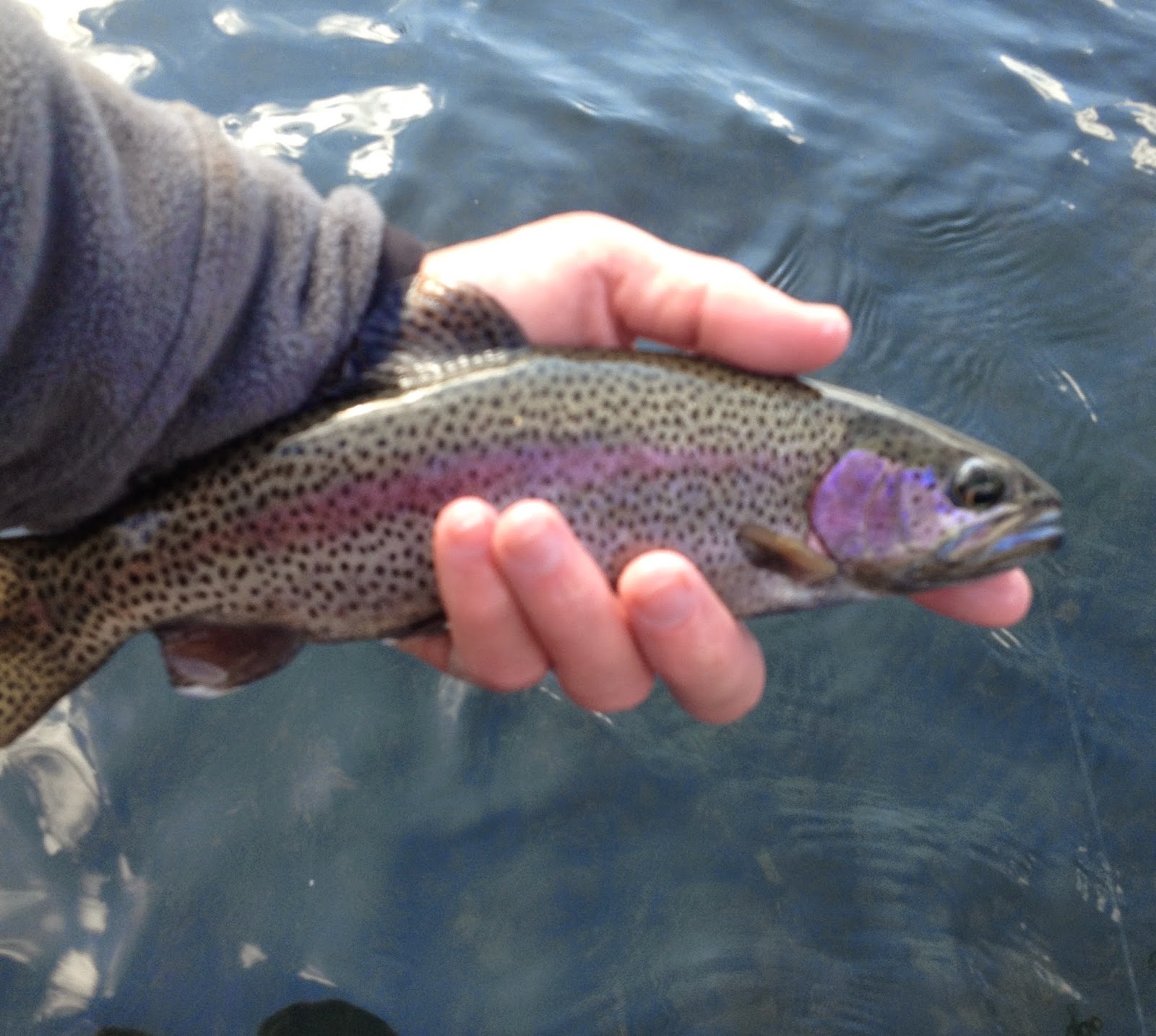 That bite went stale.  Jumped back in the cuda and changed the venue.  My interest in eagle eyeing an indicator was giving me a headache.  So I opted for a small streamer and managed a few more bows. 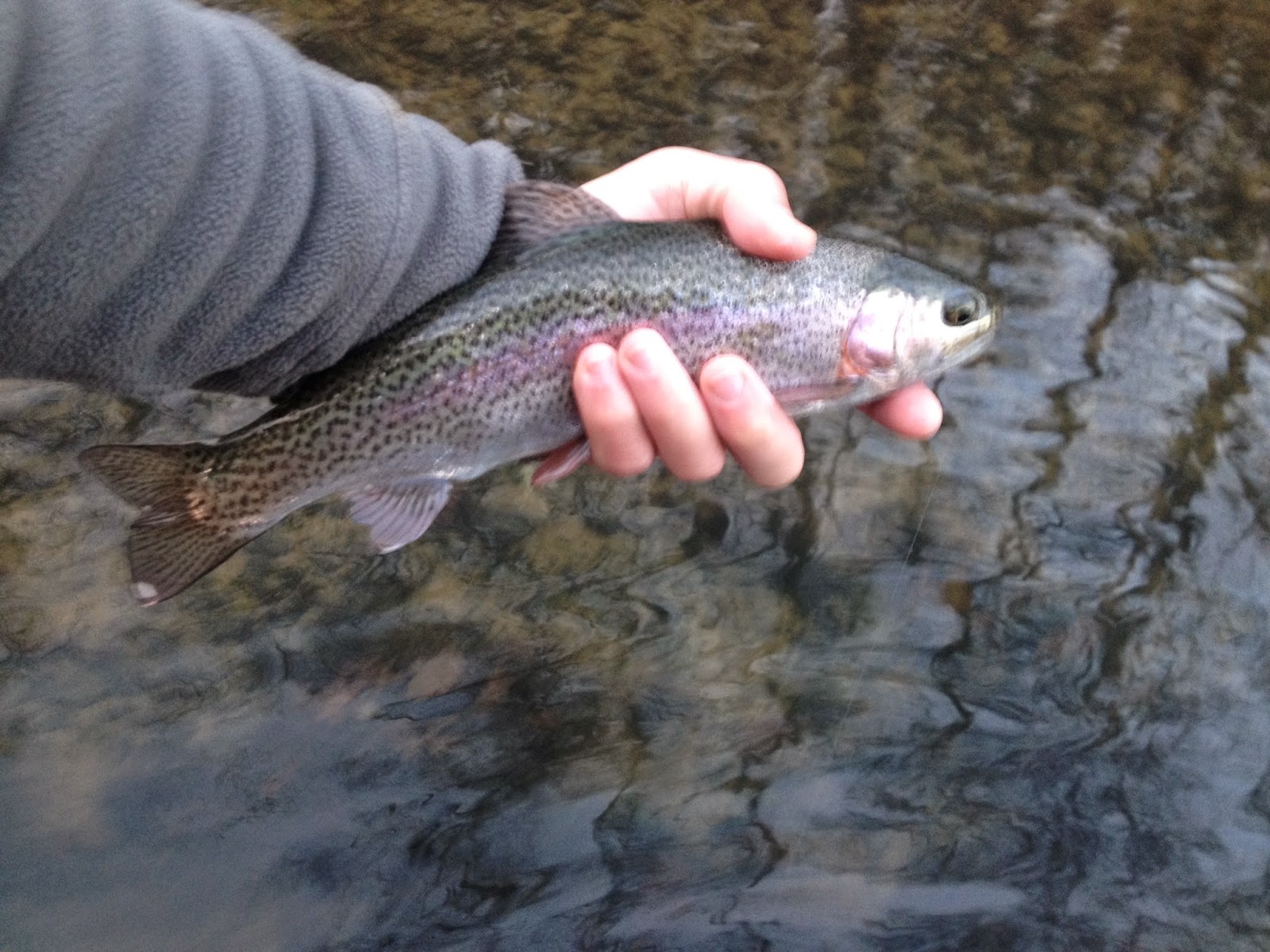 Began to notice that my attention was more on my surroundings and not fishing.  Sure sign it's time to paddle out when you start taking pictures of the bank and other scenic views.  Thankfully, I avoided scoping out vegetation...nothing wrong with that (if it's your thing)...but I'm more of a fish guy. 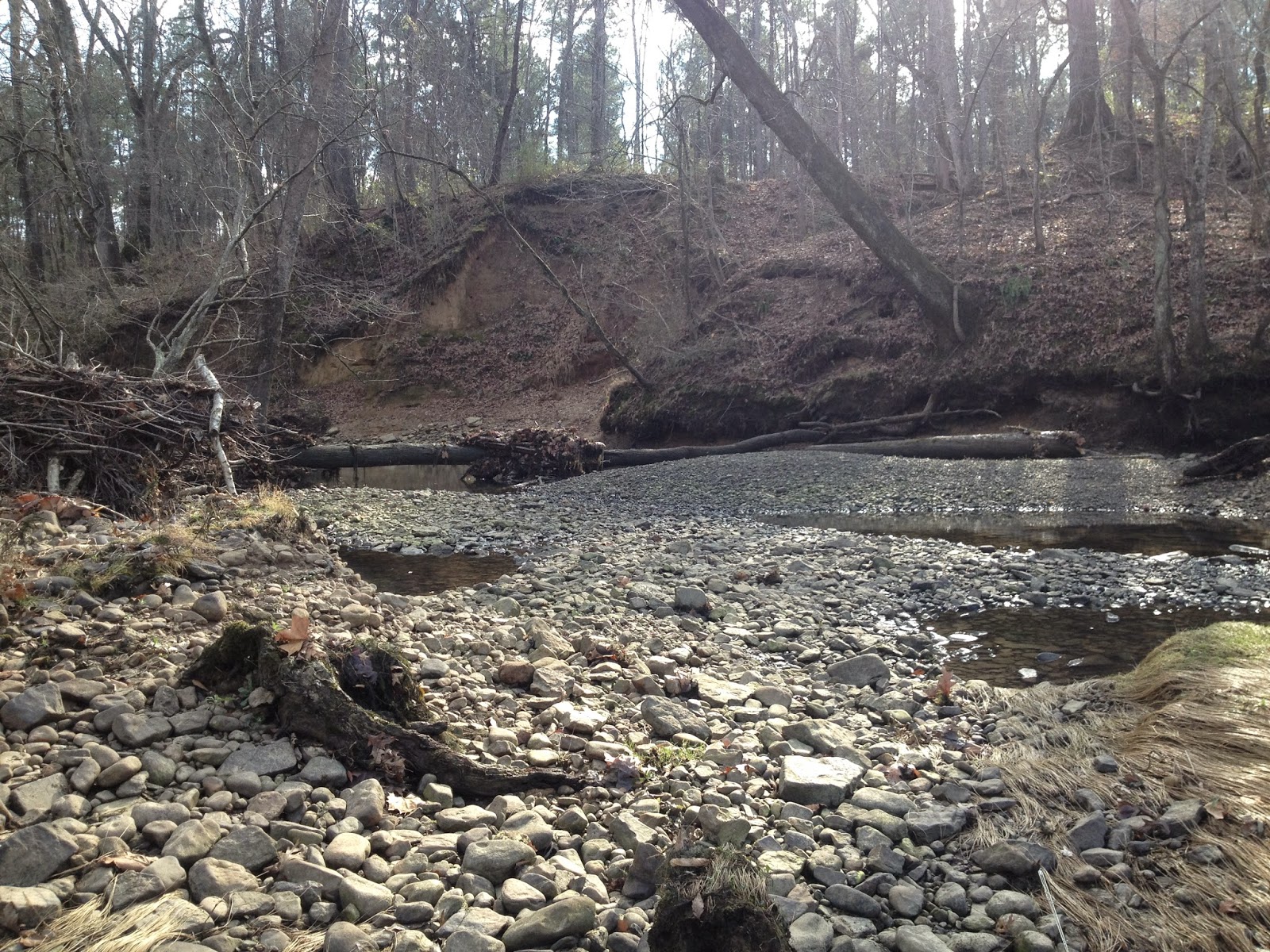 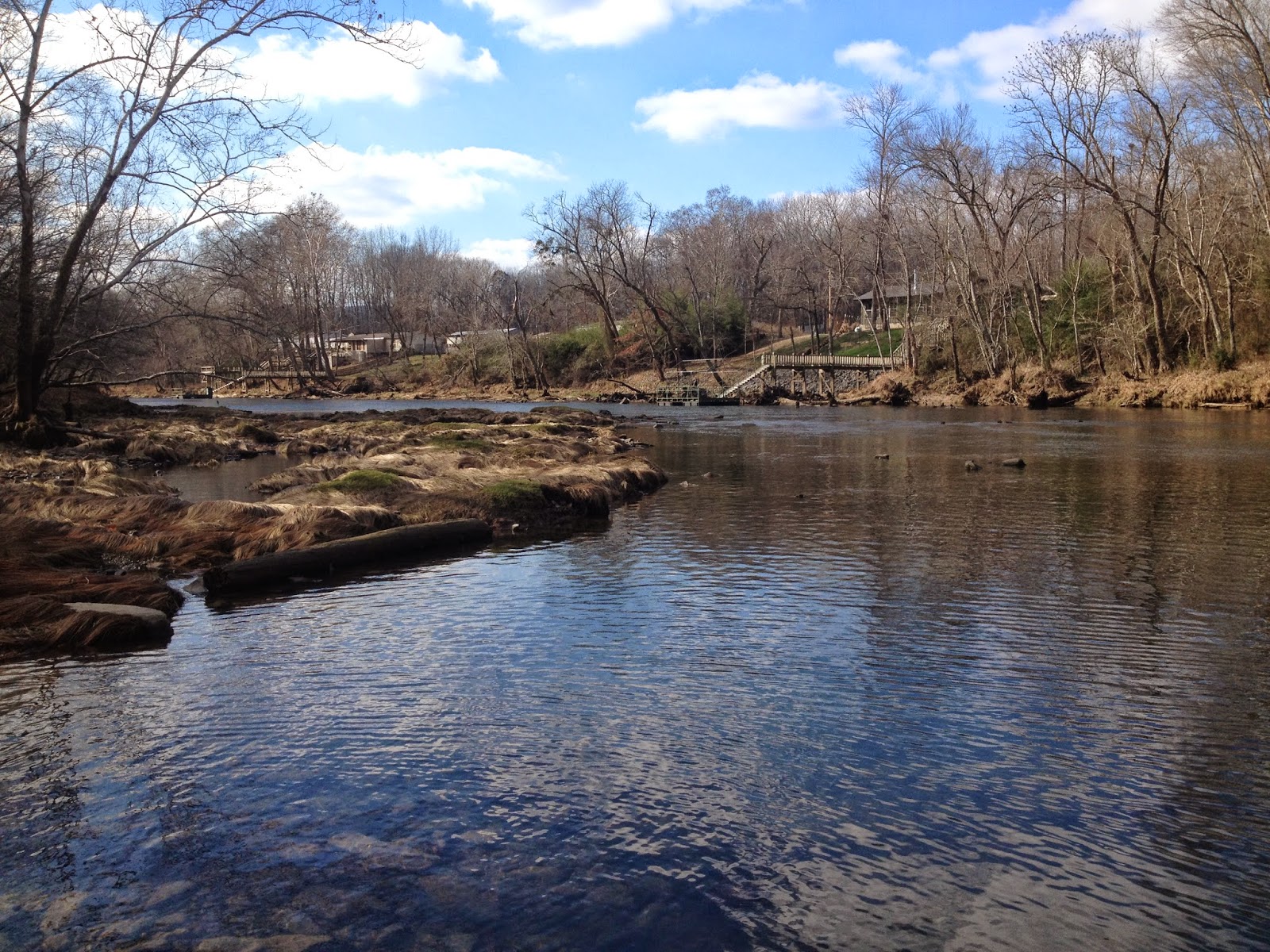 Had a mile or so to paddle and this to summit so I started the journey back around 2pm. 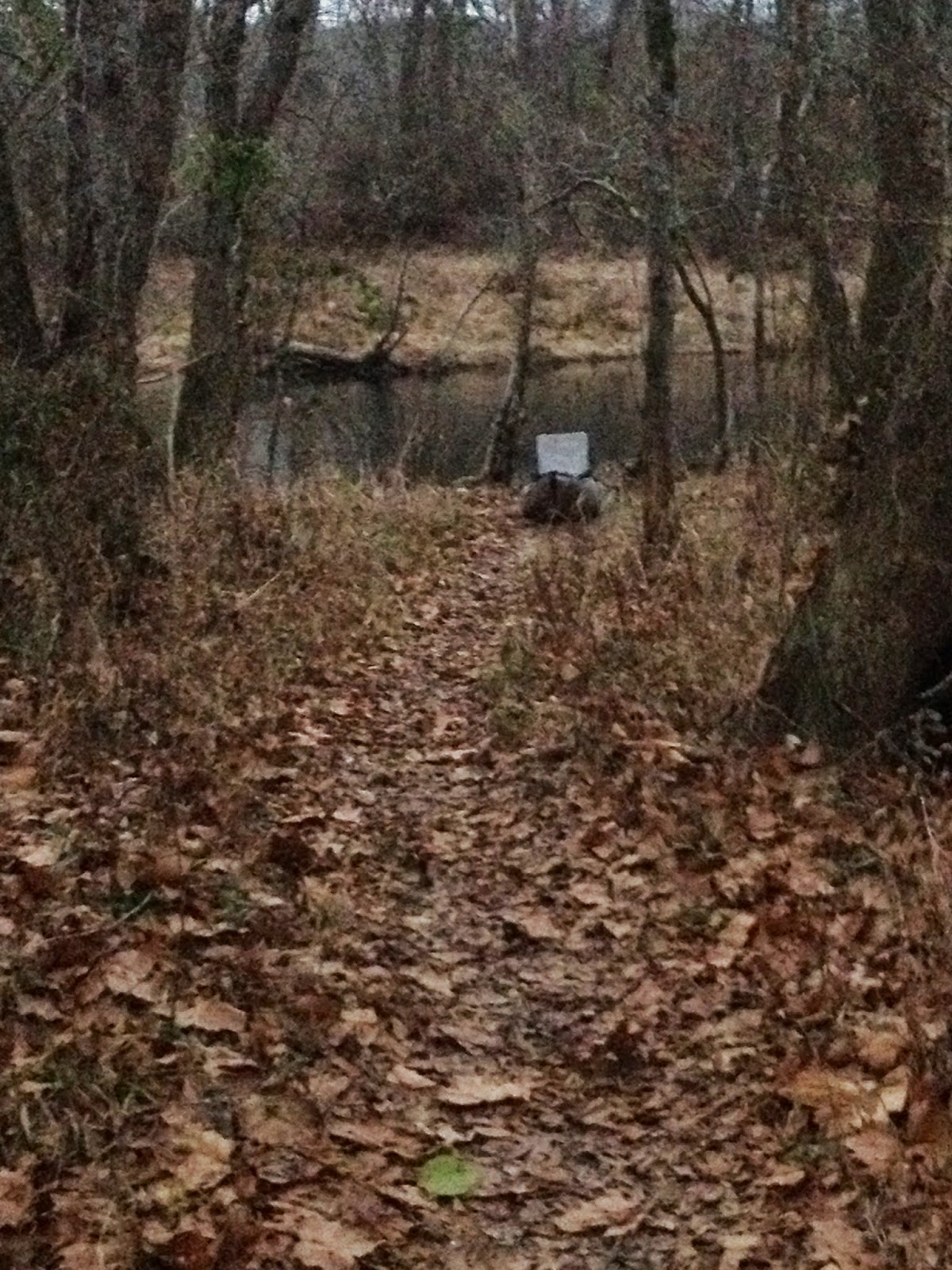 Packed it up and headed to the in-laws for more calories and a warm-up.

Started much the same way day 1 started, sketchy weather forecast, calling for near freezing temps and 100% chance of rain all day.  My brother was day 2 victim.  But he pointed out the fine print (fair weather fisher) in his fishing buddy contract and opted out.  I went to bed New Years eve thinking I would just play it by ear and see what it looked like in the morning.  Woke up and it's all wrong...no rain...temp 38f...overcast and fishable in every way!!!  So I loaded up and got on the road faster than firefighters responding to a fire at the Playboy Mansion.  My wife even mention my fish brain, as she gave me a hug she noticed I was already shaking with excitement.  It was 10am and I was just now leaving...that's not excitement, more desperation to get gone, b/c I only had half a day to fish.  An hour later and I was RUNNING my cuda and gear down the "summit".  Plan to paddle up to where I left off last trip and float back throwing streamers in the overcast afternoon.

Didn't take long to get gone and the rain started soon after.  Paddled into a crazy midge frenzy and spent a little time auditioning unsuspecting trout. 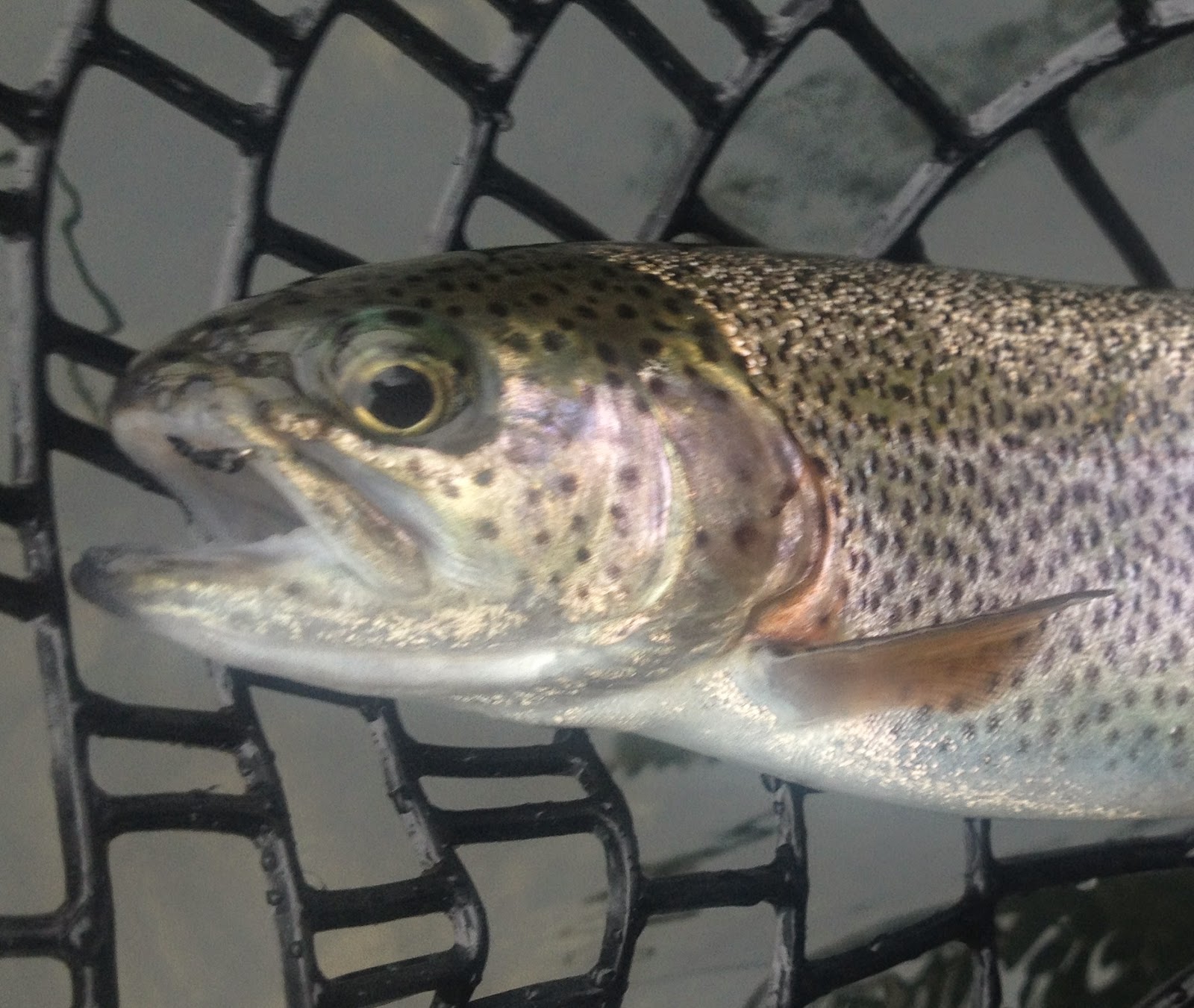 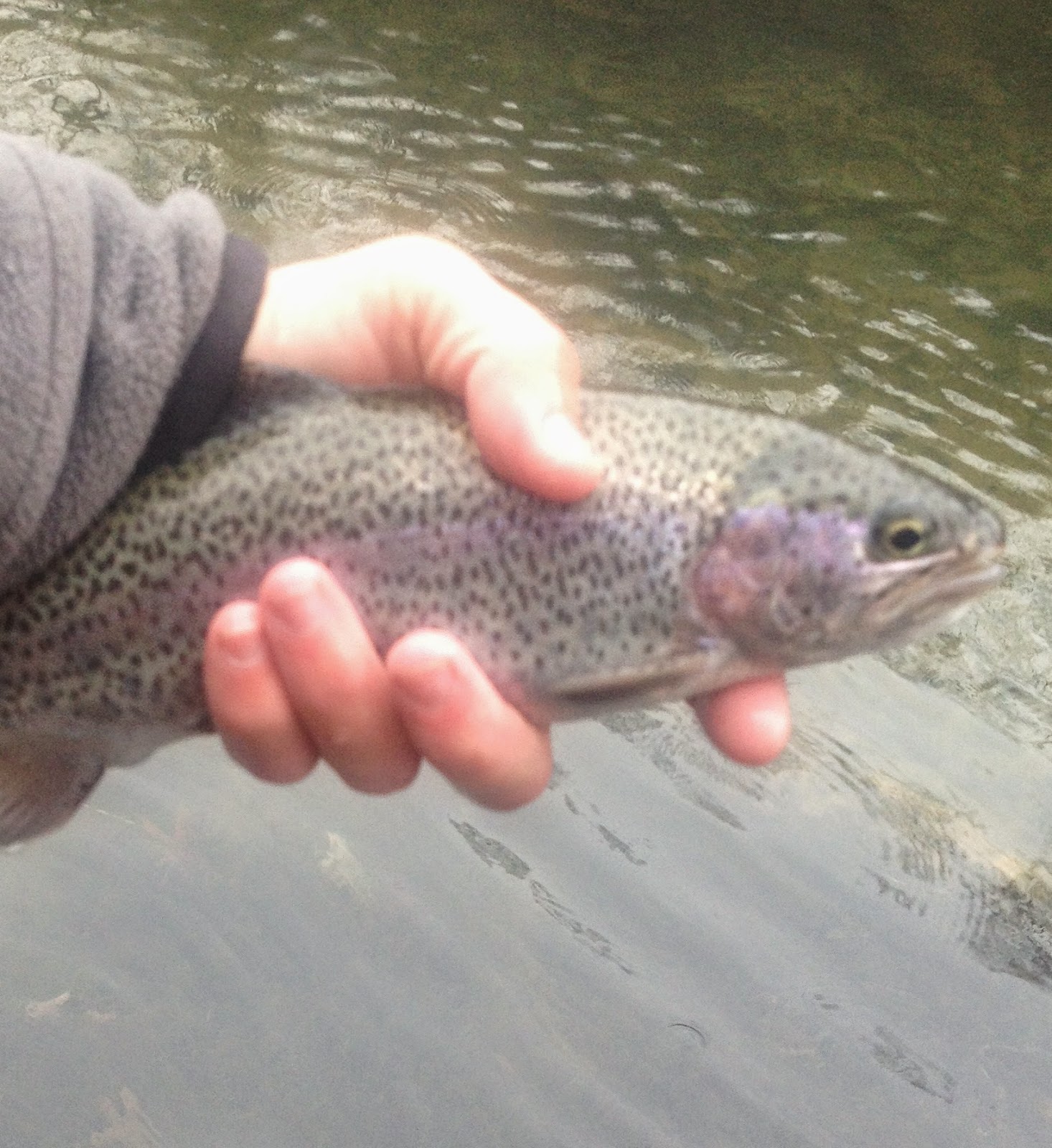 Not many pictures b/c of the time I had on the water but it was easily a fish every cast afternoon...until I needed to paddle up river so I could float back as it got dark.  So I left fish in hopes of finding that 1 good fish!! 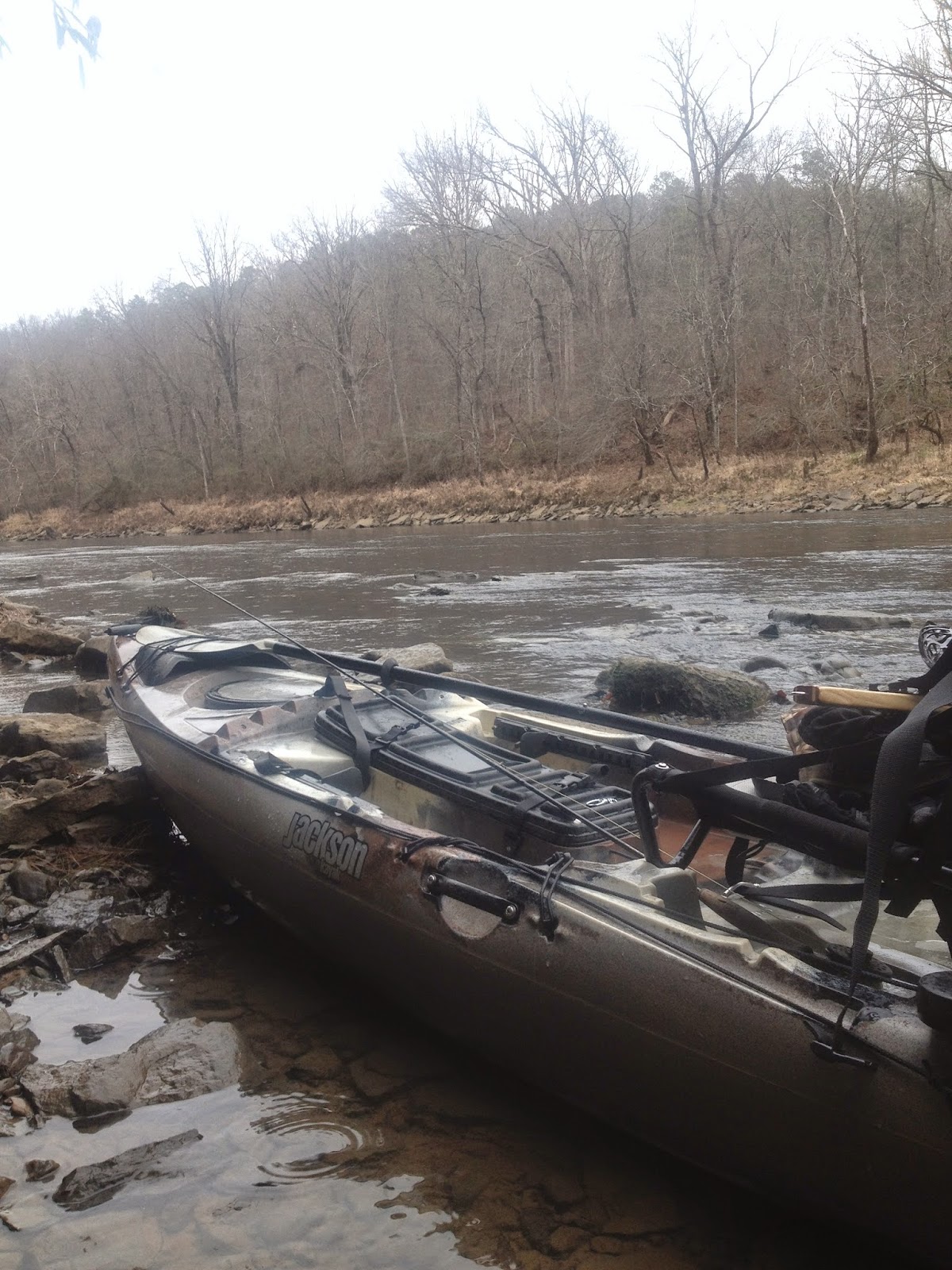 Stopped to rest a few times and enjoyed a cold beverage...speaks to me for sure!!!  Noticed a few river dwellers but not another sole on the river, 2 guys at the walk-in access.


Not sure why there weren't any other people on the river.  The weather was perfect for fishing and I was rewarded for getting out.  I covered 2.5 miles of river and was ready to start throwing at timber.  It's getting dark and the rain has gotten heavier...just the terrible weather I was hoping for.  Attached the meat whistle to the end of 6ft of 2x and presented to some heavy rock formations across the river.  Few casts in and I had a good brown on.  It wasn't meant to be and he spit the hook.  Drifted down and hooked up again...this time it's a monster.  I presented beside a large root wad and saw a giant flash dart out.  I set and he runs under the root wad...a moment later...snap, he takes the meat whistle, must have wrapped me!!  It was fantastic, only regret was throwing the 5wt and not my 8wt...just didn't have the backbone to pull him out of that cover!!  He schooled me!!

I Kept drifting and slinging 4"s of fluff at the timber.  It's always more fun to hook up...but getting the follow and the subsequent "stank eye" from a few more nice browns was awesome and I would have gone home happy with just those few events.  But it was a streamer day and the last fish was icing on the cake!!  Same pattern...timber and quick strips away from the timber.  If you hung around long enough, you get to see the worst picture of the best fish!!!

Last brown was ~19"s, wouldn't fit in the net easily.  I attempted the grip and grin, but he was ready to go.  I only hold fish over water and use a light grip.  So as soon as he started to struggle I had no chance of holding him w/o hurting him...this is the picture I have...I love it!!!!

Paddled back in the dark and pouring rain and carried everything back up the "summit", fun!  The afternoon ended splendidly.  I'm ready to do it again, and in worse conditions!!  My wife thinks I need an intervention b/c I "believe" I'm having fun.  I love streamer fishing, and I know it's fun!!

Posted by looknfishy at 2:09 PM