Infected with the Fever

News Alert....Cabin Fever is nearing epidemic levels and is wide spread across the fishing world.  I knew I was infected on Monday when I started making grand plans of driving all over the Country fishing in Colorado, Iowa, Missouri, Louisiana...No, not 1 state, I was planning on fishing in all of them in 3 days.  I had a major case of Cabin Fever.  I get this way every March (no matter how much I fish during the year I can't build up an immunity).  It struck me early this year, January!  Luckily, reality punched me in the face and a bad decision got a black eye.  Otherwise you'd be reading about interesting bumper stickers, funny license plates, and getting a traffic report.  **Bad decision is in training and a rematch is scheduled for March!!**  Only known therapy is to get out and wet a line!!


The weather has been down right, spectacular!!  The lows aren't too much fun, low 30's at night, ignore the lows!!!  Focus on the highs...HIGHS were near 70F!!!  All this over a 3 day weekend meant a camping trip wasn't avoidable.  It's only 3.5 hours to Heber Springs and I knew the LRR could treat my fever.  I decided to camp 2 nights at JFK park and reap the full benefit of treatment.  (Ironic since it was MLK holiday weekend)  Relief was almost instant, as I was driving over the dam I was greeted to an amazing sunset.

I packed lite so setting up camp was a breeze.  In under an hour, I was sitting by a fire, checking the generation schedule, and drinking a cold one. 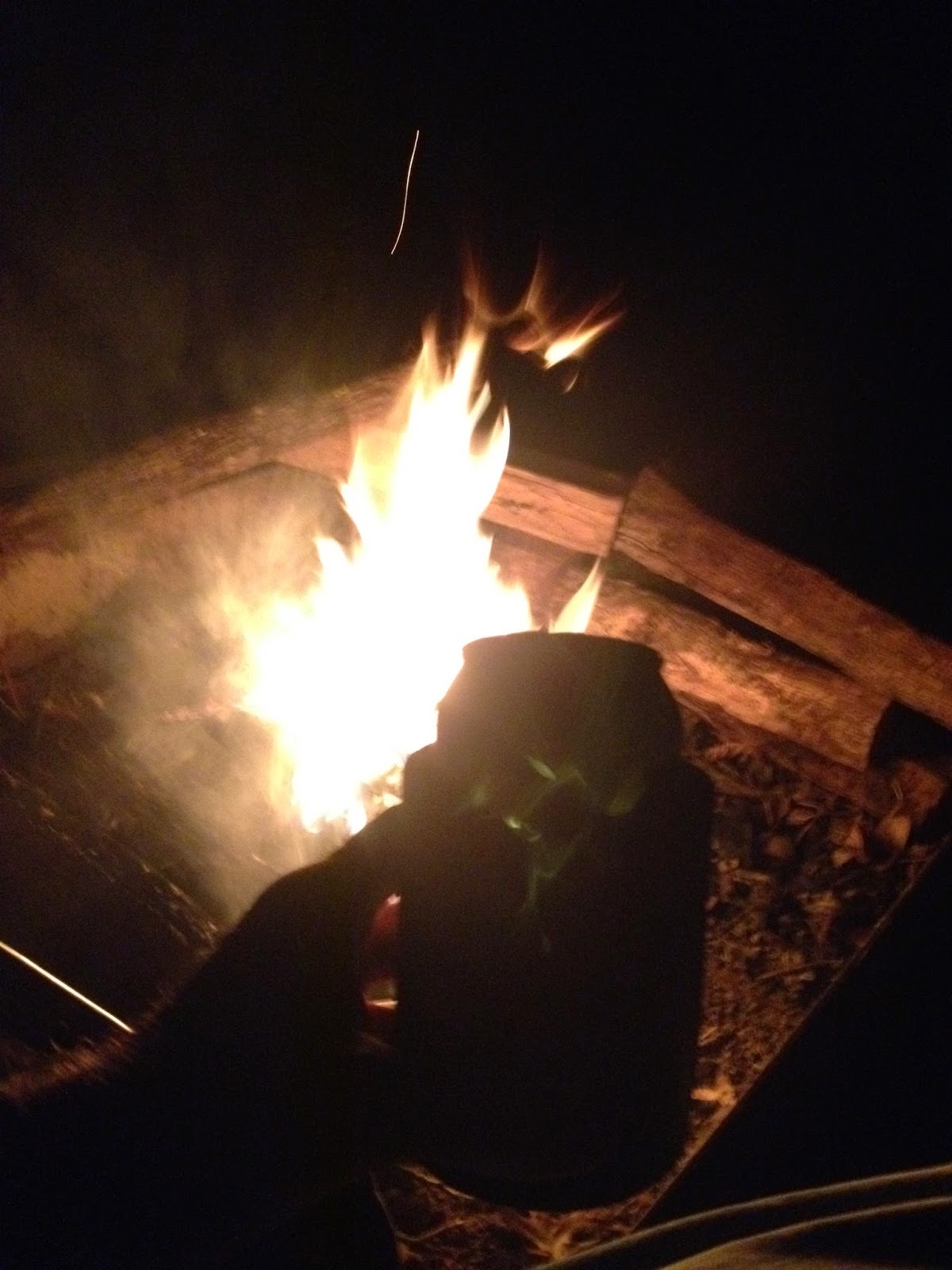 Remember when I said, ignore the lows...don't listen to me.  At 5am when everything had a layer of ice on it, I was very much aware of the temp.   Gearing up isn't an option in my 2 person tent and I was dressing for a 30F start, warming to 65F...That meant stripping and redressing in the cold, short sleeves on 1st followed by cold gear to be removed as needed. Coffee not required for a jolt when you have freezing body parts. 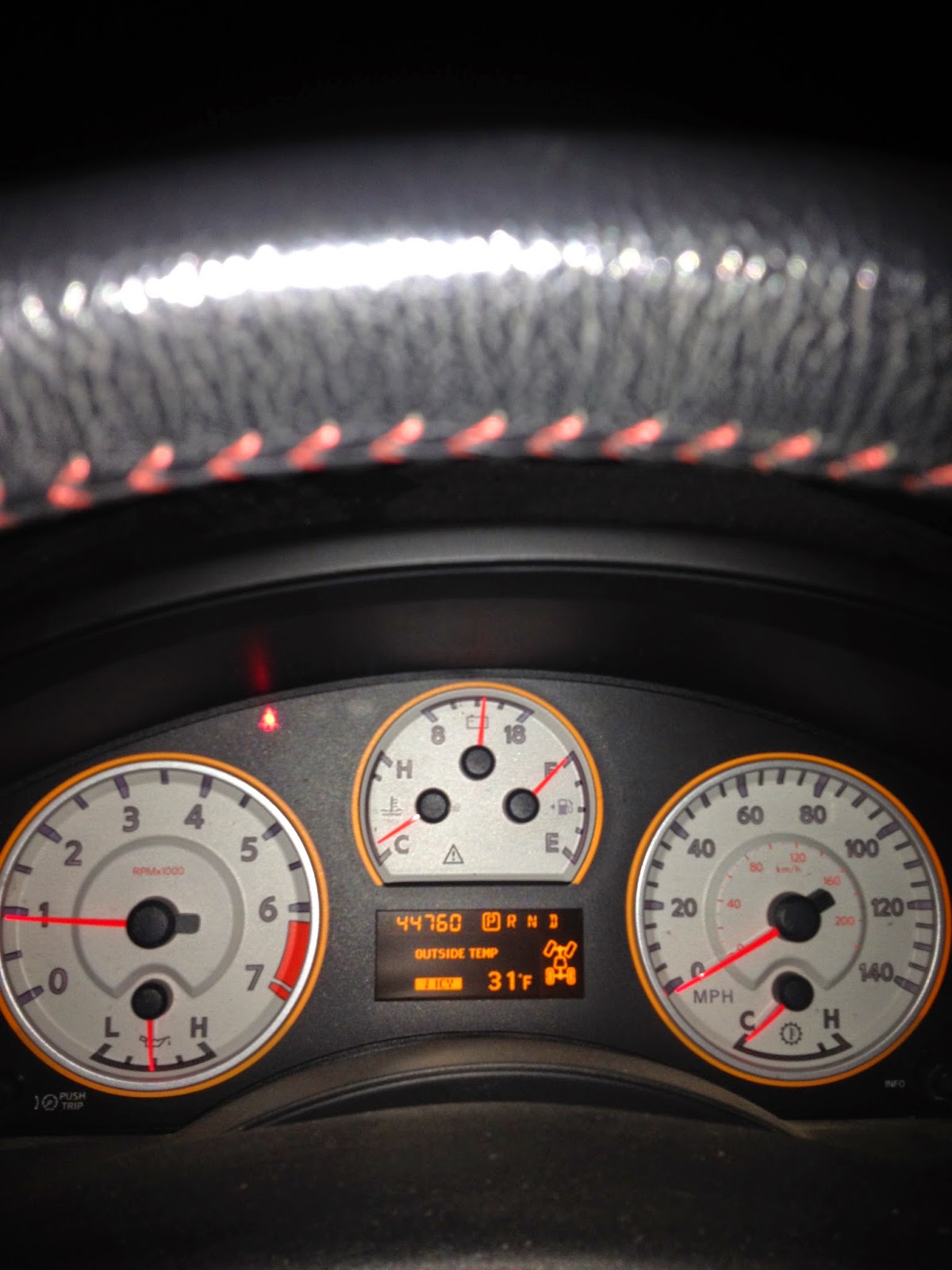 Jumped in the truck and headed to the river.  The COE was not running any water today so I was planning to fish all day.  I would head up river throwing streamers in fast water as the sun came up and nymph my way back after lunch.  Then back to the articulated stuff as the sun left.  It's fun to make a plan...plans are what keep you from being unprepared.  Back to that in a moment. 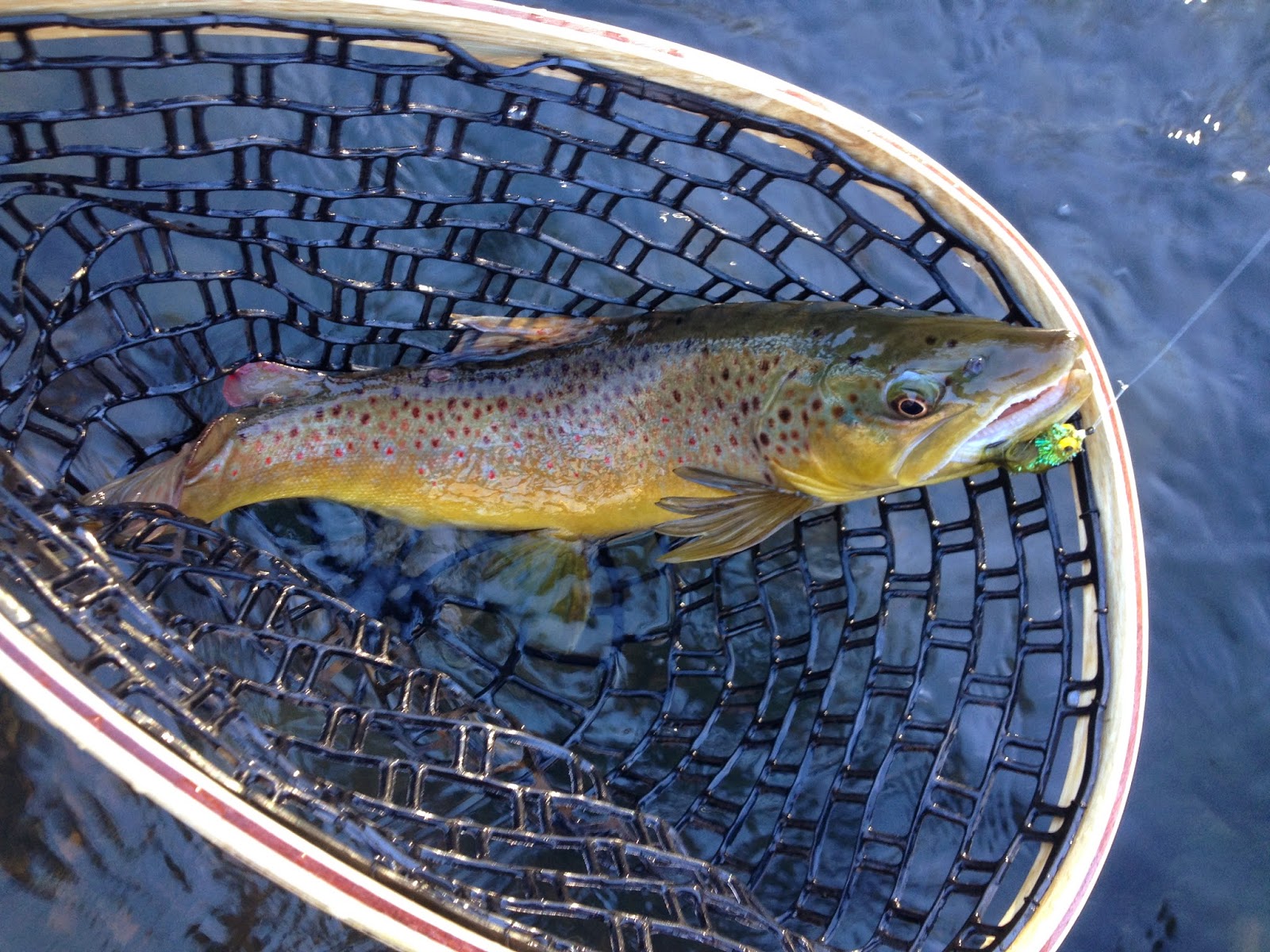 The morning started just like I planned.  I went to a spot I knew had a deep run and pulled 2 nice Browns from that run before 9am.  My fever was diminishing with every cast and I was feeling great.  I wasn't in a hurry.  I packed up about 9:30 and started up river.  The sun was getting high and the bite was getting slower but I was suffering from streamer fever now and I couldn't put the meaty stuff away.  I knew the areas that would be best for streamer work so I paddled past a bunch of water that would be great for nymphing later. 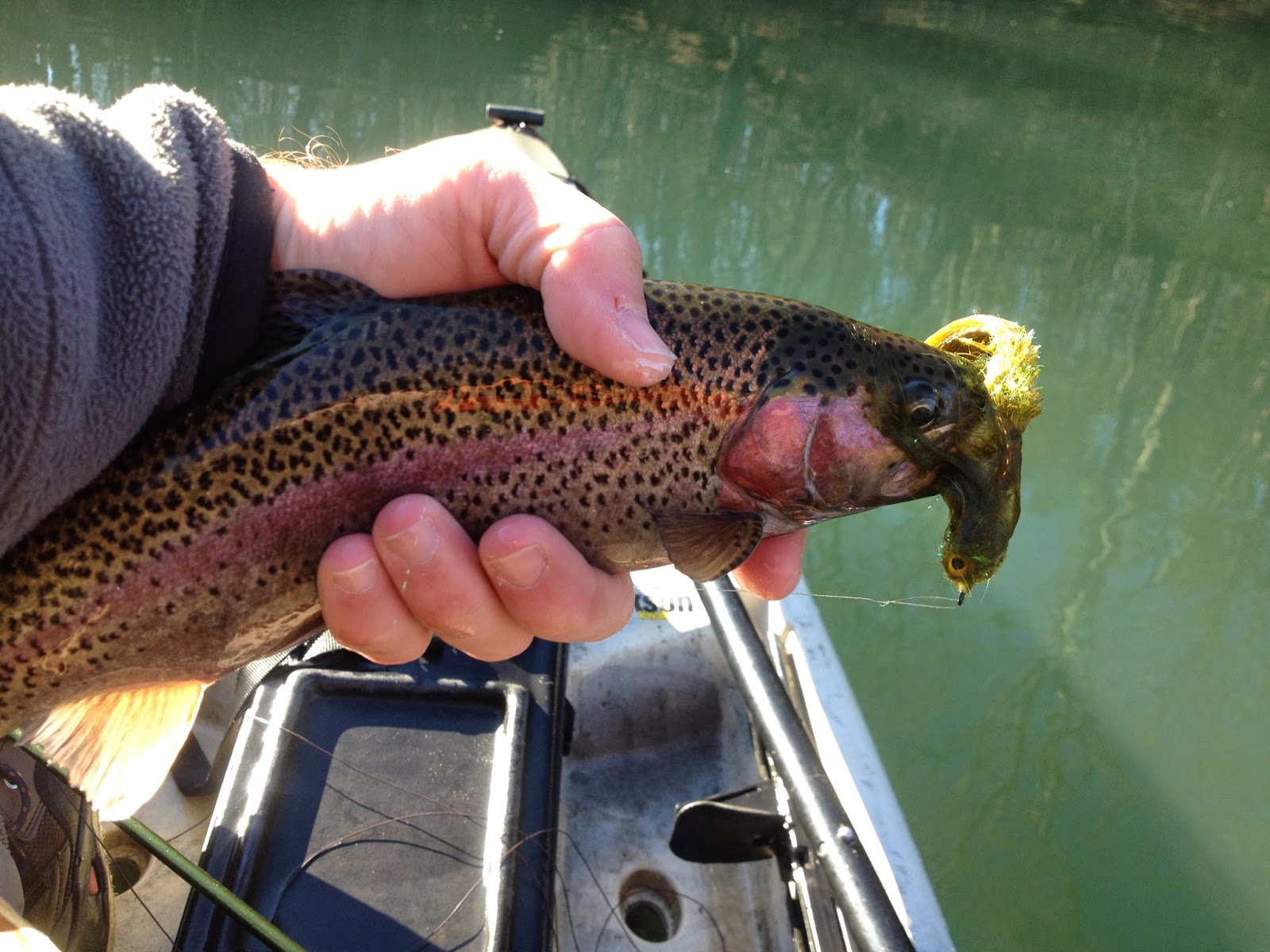 Throwing streamers isn't the way to load the boat and today wasn't different.  Caught a few more bows but that's it...just a few fish before lunch.  They were some hard fighters and I was pumped to pull 2 nearly 20" browns. 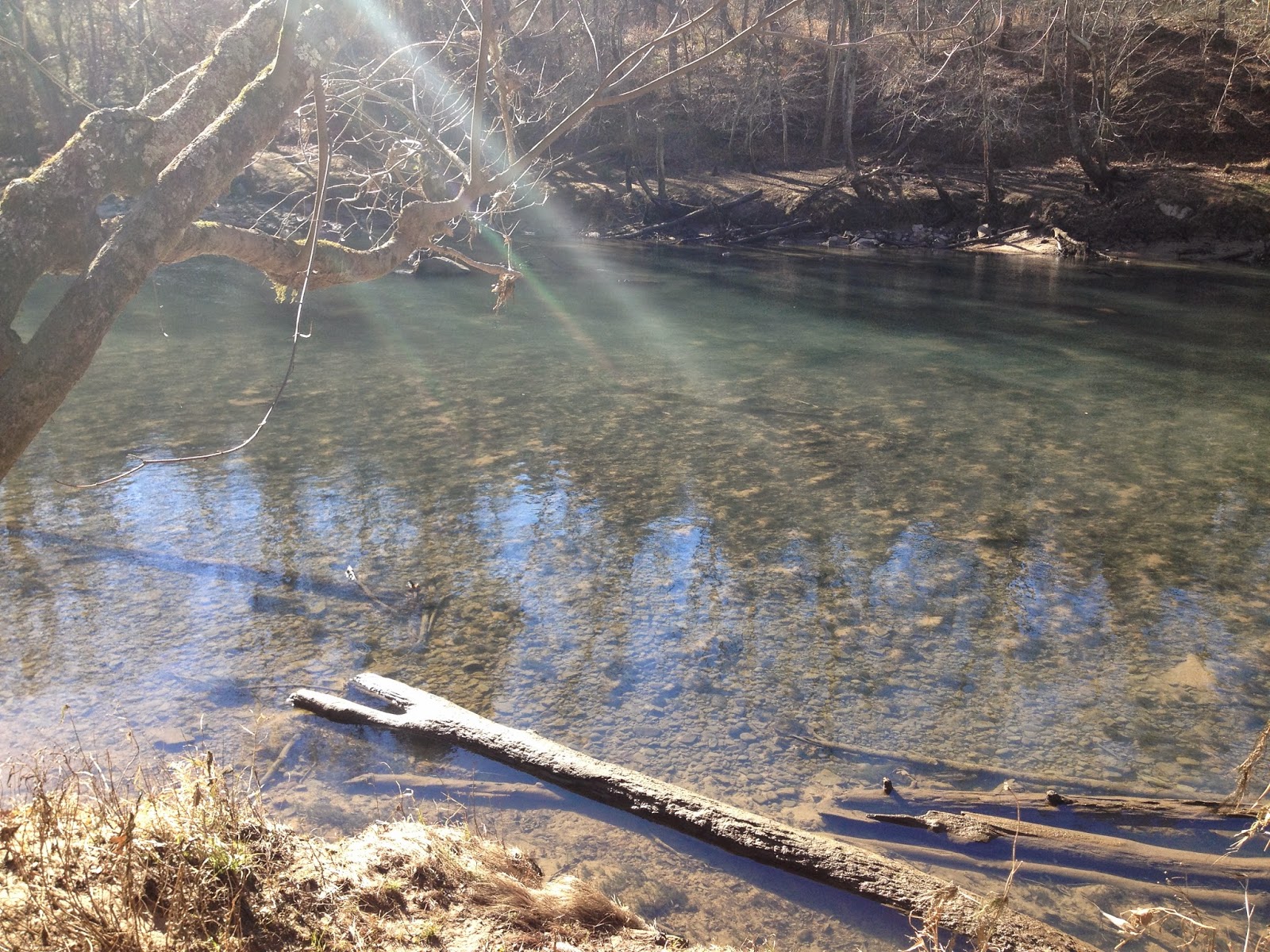 Took a break around lunch time, grabbed come calories.  Checked in at home...just enjoying the day.  When all of the sudden, I feel something crash into my leg.  I turn and there's my kayak, guess it's ready to leave.  The island it had been resting on was an underwater island now.  Confused I grabbed my phone and called the COE...guess they didn't follow their plan and pooped on mine.  They had turned on a unit for 2 hours earlier and that water reached me just when I got to my favorite place to wade.  Thanks for the warning.  I wasn't expecting the rise in water and wasn't prepared...as such I was lucky to be standing by my kayak. 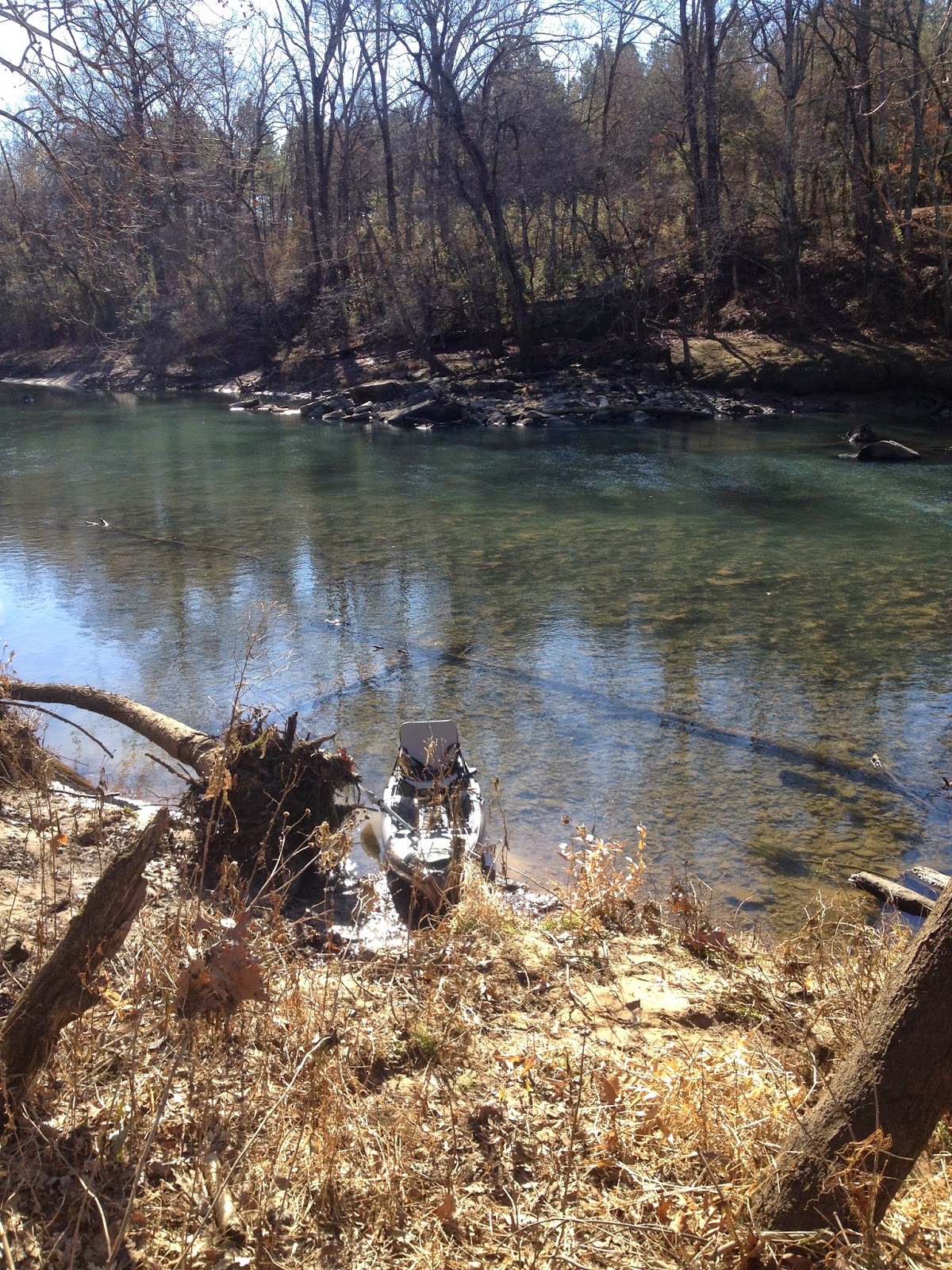 Wasn't the end of the world, some moving water increases feeding activity...at least that's what I read in my library of fishing magazines or watched or was told, can't remember where the knowledge came from.  But plan "B" was in action.  I go into fly fishing ninja mode.  I'm drifting...slinging at the bank, ripping, and stripping wait'n for that monster Brown to eat.  Hold on it's about to get real!!  Envision, full sinking line all over my feet, under the kayak, all up in my rudder...did I say "ninja" mode.  I meant "GB Packer" mode in the last 2 minutes of the NFC championship game.  It was both comic and tragic!  Full sink and kayaks don't go well together...at one point I managed to tie the Cuda in the perfect improved clinch knot.  If only I could do that with my SH's (1 hackle always finds a way into the knot)!!? 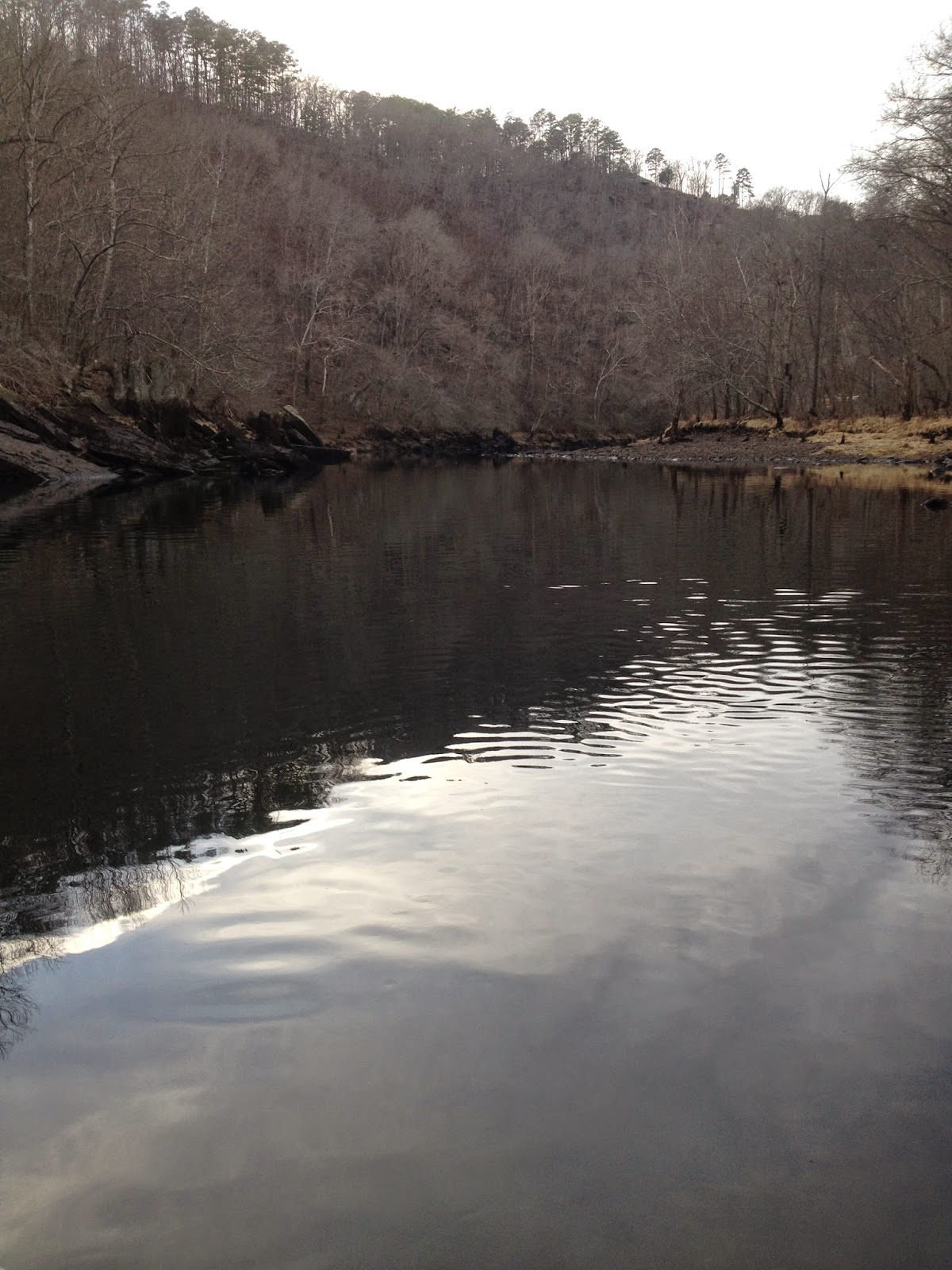 So plan "C" if you will introduce yourself...say what...this will be on the fly, fly fishing!  Put the big stuff away and drifted an indicator until I found a place to wade.  So much fun watching my kayak with 1 eye (afraid it would lift and drift).  While watching my indicator with the other eye.  I did manage a few more bows on the way out.  Eventually, plan "C" became plan "D", paddle out and wade below the dam!! 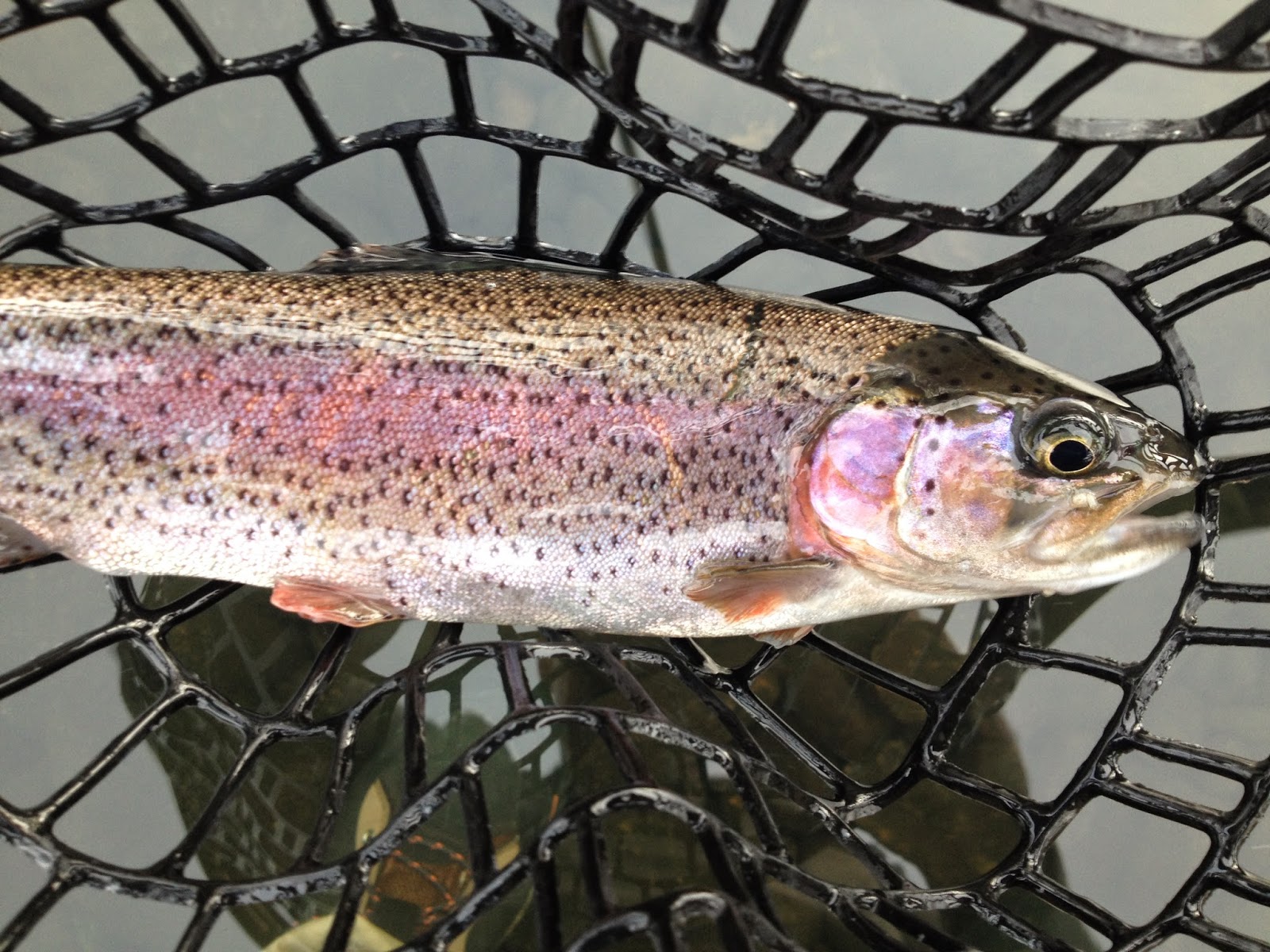 Had a good time below the dam.  Not many people fishing and found a few small bows.  The campground was pretty empty over the weekend. 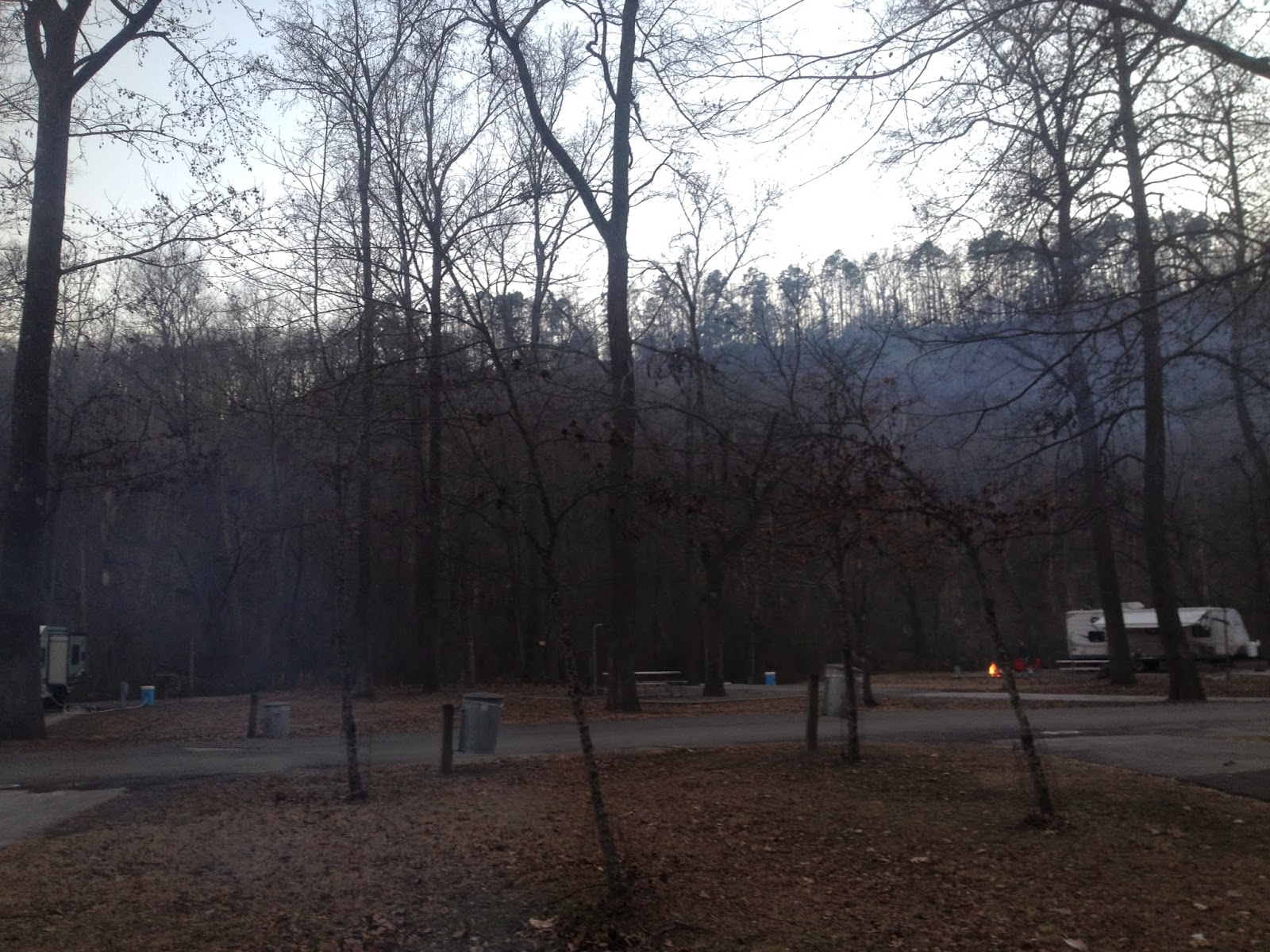 Made a quick dinner and a new plan for the morning.


Plan was to head further down river and avoid the water that was projected to run for 4 hours on Monday.  That would give me about 6 hours of low flow fishing. 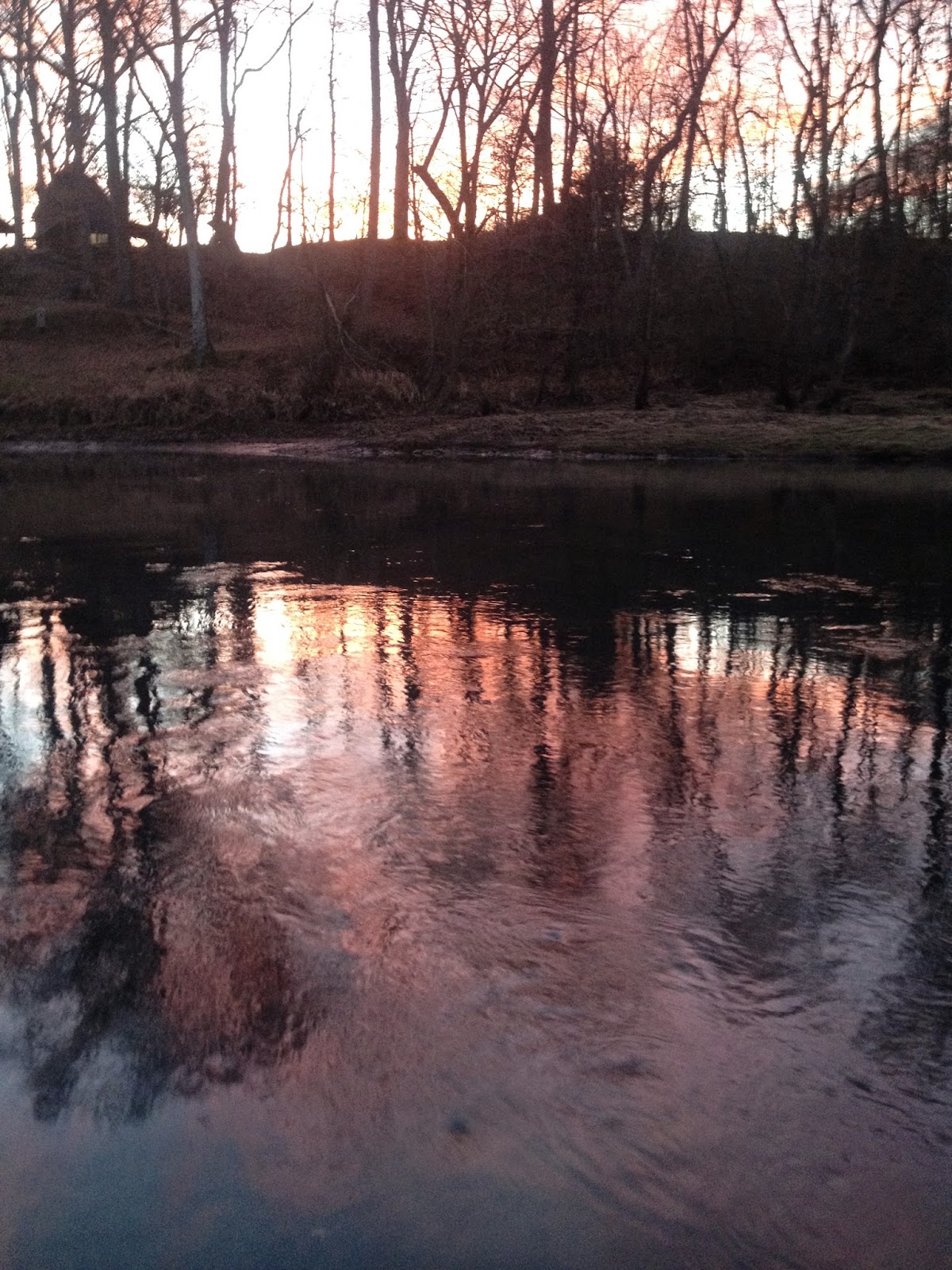 Started the same as Sunday throwing a streamer in fast moving water.  It wasn't long before I had a beautiful brown in HAND...I say that b/c I had a net when I started wading...it's clearly visible in my pictures...but when I went to use it, it wasn't where I left it.

Didn't go far and got another eat from this nice bow!!! 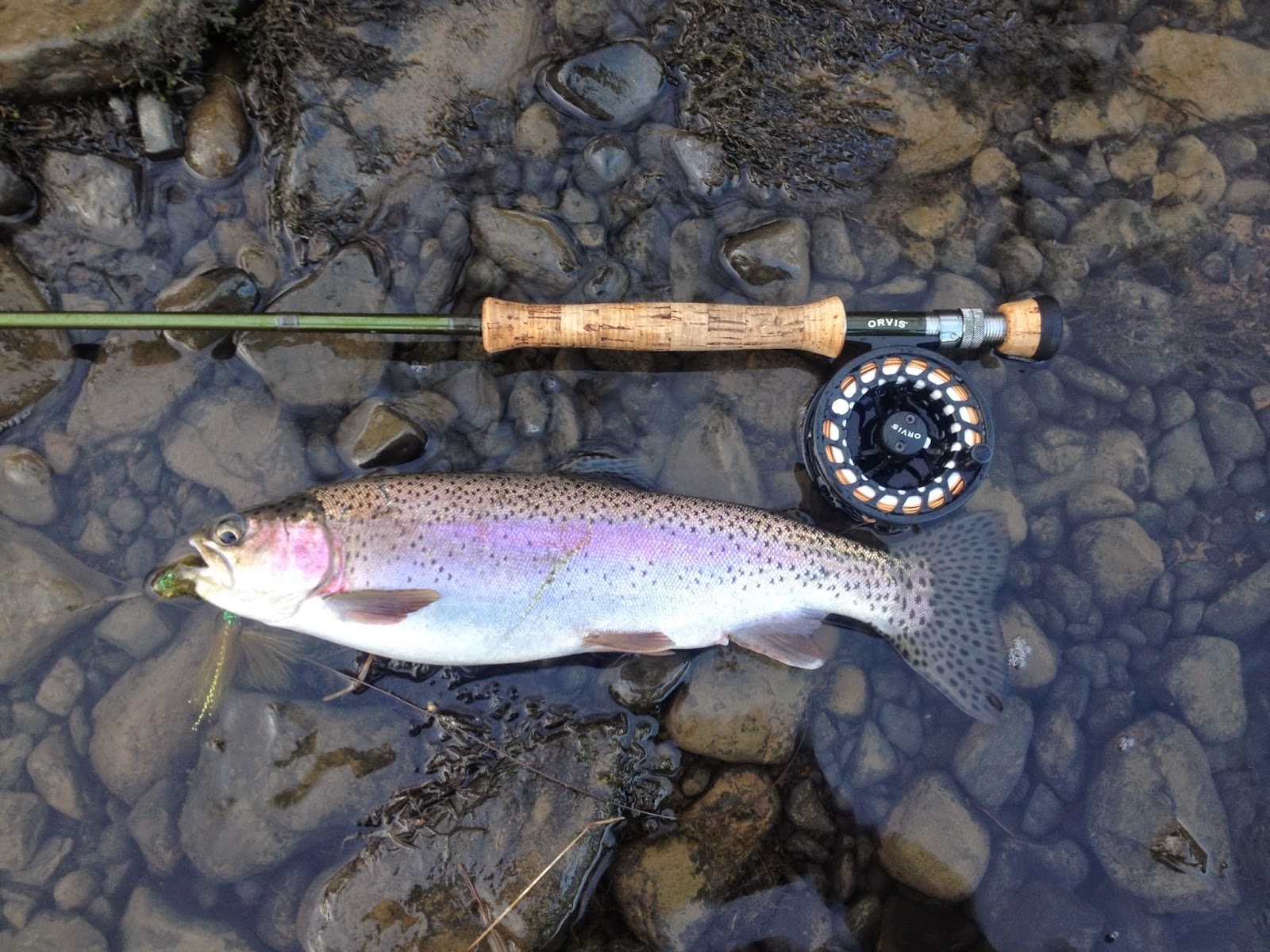 The sun got high, a few boats ran through my water, just some excuses on why I didn't pull any more from that great run.  So I opted for the 5wt and nymphed the last few hours and lost count of the stockers.  They were eager to take soft hackles, and midges. 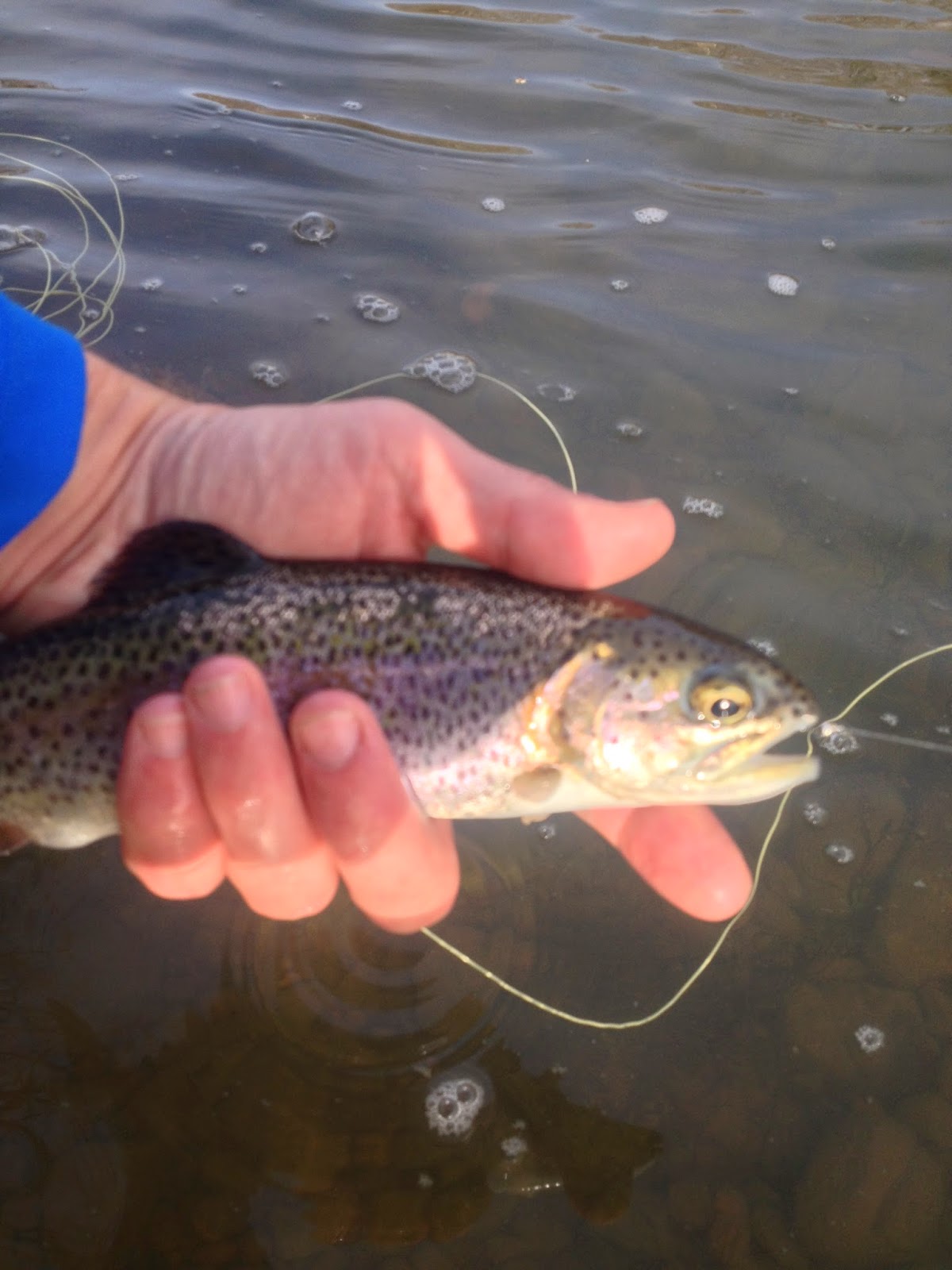 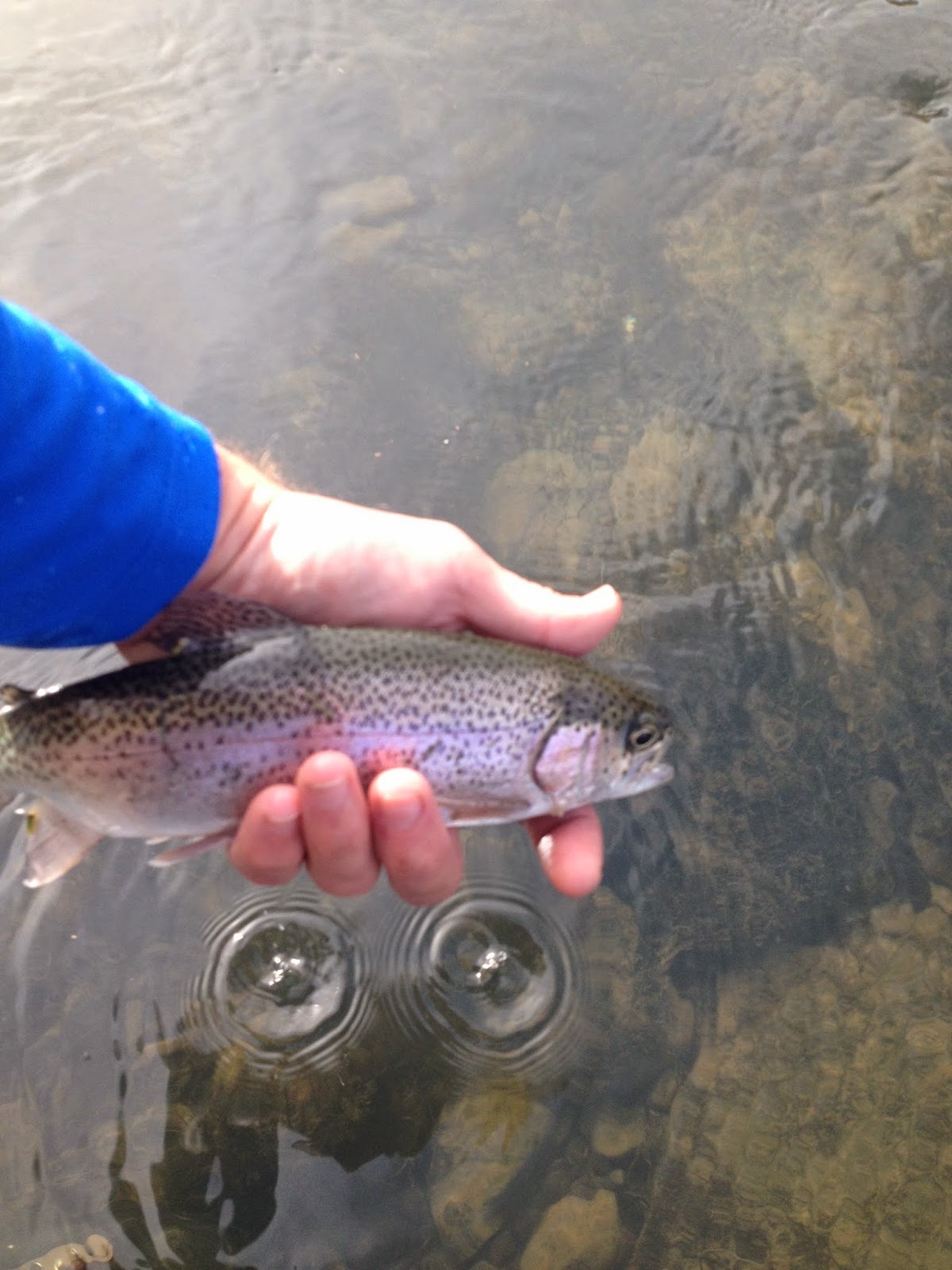 Around noon I started heading back to the truck.  I was about 1/2 a mile away when the water started to rise.  As luck would have it, I spotted my net floating in some slack water.  Nice to have it back!!!  After this weekend I'm feeling revived, not cured!  Cabin Fever has no cure, but when the fever returns I know what I'll need to do...get some therapy!!!